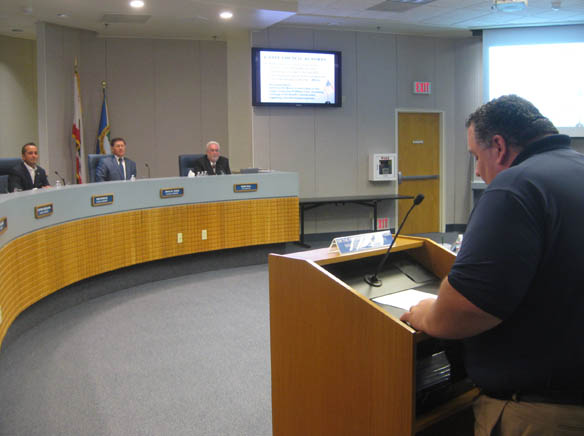 During a May 13 meeting, Santee City Council members hashed out where to allocate $247,493 in available funding to best help the community as it begins to recover from the COVID pandemic.

That funding has two sources: $85,389 in 2019 Debt Service Reserve funds that can be allocated for coronavirus response at the discretion of the city council, and $162,104 it will be receiving in Community Development Block Grants (CDBG-CV) funds as part of the Coronavirus, Relief and Economic Security (CARES) act signed by President Trump on March 27.

A May 13 city council meeting revealed differences in where council members would distribute the funding to  most benefit the city as it emerges from measures that left business owners and residents struggling with shuttered business doors and modified services, and children learning at home while schools remain closed.

The table supplied by city of Santee Senior Management Analyst Bill Crane for the May 13 meeting reflected potential distribution of the total $247,493 as $57,000 for public services such as childcare and food delivery to seniors; approximately $100,000 for economic development such as grants and forgivable small business loans; approximately $57,000 for rental assistance limited to three months; and approximately $32,420 for administrative costs.

According to Crane, those numbers were based on dialogue with staff on the providers’ and communities’ needs in responding to COVID-19.

However, during discussion, the council shifted those numbers to fund the programs they individually identified as priorities for the community.

They ultimately voted unanimously to allocate $60,000 for enhanced public services; $130,000 for economic development in the form of grants and forgivable loans; $25,073 for rental assistance up to three months; and $32,420 for administrative costs.

Mayor John Minto questioned whether administrative costs could be reimbursed by the Federal Emergency Management Agency (FEMA), however Santee City Manager Marlene Bass said that is an unlikely scenario as the funding does not originate with FEMA.

The council initially looked at how to split the $57,000 slated for public services between subrecipients including the Cameron YMCA, Meals on Wheels, Santee Santas and other community groups.

Council Member Laura Koval said her top two priorities in funding public services are congregate care and childcare so employees can return to their regular workplace when companies open doors again. Koval cited the importance of the Boys and Girls club in particular.

“If we really want to start having companies open, we need to pay attention to people who have children at home so they have someplace to go,” Koval said.

“I’d consider taking a slice of what we would have given to Crisis house and give it to someplace like Cameron YMCA to help them get started with childcare but I still want to help those individuals on the street who might be our largest vector.  The money for Santee Santas and Meals on Wheels is very, very important,” Houlahan said.

Council Member Ronn Hall said it is important to consider which subrecipients operate out of Santee.

“The job here for Santee Santas and Meals on Wheels is to deliver food so why give that money to Crisis House? That money should be staying here in Santee with Santee people.  It doesn’t need to be going to El

Cajon and then coming back,” Hall said.

Mayor John Minto said the most important thing to do, regardless of where the dollars go, is coordinate efforts so the funds help as many residents as possible, an idea Council Member Rob McNelis backed.

“The reality is places like Meals on Wheels and the Santee Food Bank have a backbone, a system set up where they can provide meals at a fraction of the cost because they’re buying it at a large volume,” McNelis said.

With that, the council widened their scope and considered how to split all the COVID recovery funding between public services, economic development grants and rental assistance to produce what McNelis described as the most bang for the buck.

“I want to see more go to small businesses, the ones with five or fewer employees. These businesses were told ‘you will shut down’ and it is the moms and pops, it is their whole life, oftentimes those are families employing our next generation, our next Santee citizens,” McNelis said.

He said he is less concerned with rental assistance as he believes there are other programs that address the cost of housing, a point echoed by Hall.

“We’re talking about $3,000 for three months so we’re helping, what, ten people? That’s almost nothing… We need to be smarter about this.  A landlord can’t evict anyone right now anyway so it’s money that’s going to go to waste as I see it,” Hall said.

Crane said: “My opinion is that the federal government keeps giving money to organizations with no specifics behind it and then it isn’t used in the right way… I’d like to make sure we’re helping someone who has really fallen through the cracks. This has to have some teeth behind it.”