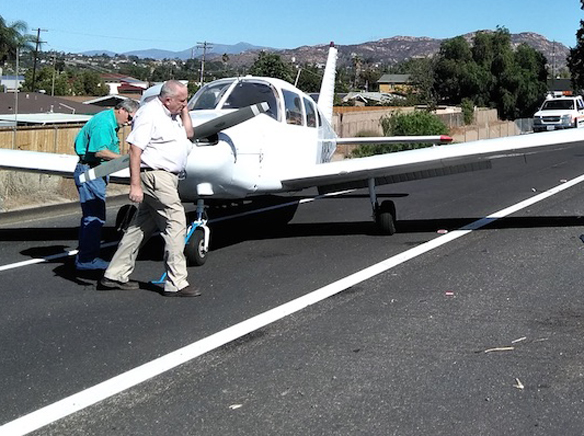 Air traffic from pilots in training from Gillespie Field have long been a point of contention in East County, with several groups from El Cajon, Fletcher Hills, and Lakeside complaining of aircraft flying above their communities. The major contentions are the noise that the training aircraft make and the danger that is present in training new pilots over community areas.

Gillespie Field is well underway to becoming a hub of aeronautics, with the entire facility and surrounding area becoming East County’s aerotropolis. The El Cajon based airport now includes nine flight schools and flying clubs, and three aviation museums located at the airport.

Ron Ripperger is building his home and vineyard in Alpine and while working his site up on a hill, he has noticed the increased air traffic flying above the Alpine community daily. He expects to move into his new home in about three months.

Ripperger said he recently started counting the number of planes flying over his neighborhood, and even on a short day, it ranges around 50 planes a day. That does not include training going on at night he said.

Ripperger tried finding out what he can do to reduce the noise and stop the constant flying of public aircraft over the community, but all endeavors led him to the Federal Aviation Administration.

“We started out contacting our local Alpine Community Network where it is clear many residents of Alpine are really tired of the constant planes flying over our community,” he said. “We then contacted Supervisor Dianne Jacob’s office who reached out to Gillespie Field for clarification. A representative from Gillespie Field contacted me by phone and said that the FAA was the agency to contact. We reached out to State Sen. Brian Jones as well and a representative from his office referred us to the County or FAA. At any rate, the fact remains that civilian aircraft use a certain part of the Alpine community skies for practicing every day.”

In a response from the FAA Office of the Regional Administrator Western-Pacific Region, it said there is no practice area in that area, but Ripperger pulled the Gillespie Field Guide (2017) and it shows Alpine as part of the heavy traffic training area. On page 19 of the guide, the heavy traffic areas are Jamul and a stretch that includes the El Capitan Reservoir, down over Viejas to the tip of the Loveland Reservoir. The approach course to Gillespie Field goes straight through Alpine.

The FAA also said that the airspace above his residence is uncontrolled below 18,000 feet and that aircraft operating under Visual Flight Rules can legally operate in uncontrolled airspace provided they comply with altitude requirements.

Altitude requirements vary according to the FAA letter, 1,000 feet above the highest obstacle over any congested area, 500 feet above the surface over other than congested areas with the exception of over open water or no closer than 500 feet to any person, vessel, vehicle or structure. In addition, the letter stated that there are no federal regulations the FAA can enforce limiting the noise created by airplanes in flight after they have bet federal certification standards.

Ripperger said the response from the FAA was a typical generic response, and that everybody has the right to fly over the area.

“We also see military and commercial aircraft planes, but we also see two or three small planes in the sky near each other,” he said. “I know what the FAA would say that their record is incredible, but if somebody does have an accident it could lead to a dangerous situation. I have no problem with the commercial and military aircraft.”

Ripperger is working with to bring more awareness and gather support to see if there is anything that can be done to help reduce or stop the constant flow of air traffic over portions of Alpine.

“If they don’t get back to us soon I am going to send an official letter to the head of the Western Region FAA and I might send it to the president and vice president just to see if I can get some action on this,” he said. “We are going to keep pushing. I’ll keep going up the food chain wherever that takes us.”