What was built 132 years ago, is one of the oldest structures in downtown Lakeside and once had a rough-and-tumble reputation? For longtime Lakesiders, the answer is easy: The Lakeside Hotel.

Thanks to the Maine Avenue Revitalization Association (MARA) the old hotel has a new paint job and is looking good.

MARA has been working to improve the look of historic Downtown Lakeside since 1992. The Lakeside Hotel has long been on co-founder Betty McMillen’s radar.

“It’s the second oldest building in Lakeside (the oldest being the 1875 Ferry ranch house in Lakeside Farms) and we would like to take it back to as original as possible,” she said.

Last year, MARA funded a new sign for the Lakeside Hotel, painted by town artist David Ybarra. This year, the hope was to begin some historic renovations on the structure. After many meetings and much discussion, the decision was made to paint the building, the advantage being an immediate and visible improvement in the community.

The history of the hotel begins with the history of Lakeside. Built as the town was founded in 1887, it was the Lindo Hotel and served as a boarding house for railroad workers. Its first location was three-quarters of a block away, on Lakeshore Drive just west of Maine Avenue. In 1893, owner Martha Swycaffer moved the two-story structure to its current location on the corner of Lakeshore Drive and River Street. There it also served as a grocery store, post office and even a stage line headquarters. Enlarged in 1908 to add six more rooms, the Swycaffer family operated the place until selling it in 1941. That is when the name was changed to the Lakeside Hotel.

Longtime Lakeside residents are more acquainted with its sketchy reputation as a wild country/western bar in the 1970s and 1980s. In fact, that memory still holds in the minds of many, who often scoff and roll their eyes at the mention of the Lakeside Hotel.

In 1995, a new owner converted the old place into a sober living home and, through a succession of owners, it remains as such today. Current owners, Steve and Jane Hallauer, have made numerous improvements since buying the “hotel” several years ago, including upgrading the rooms and adding a well-regarded coffee shop. For Steve, it is a long-term project that he wants to get right.

Of course, everything costs money and until MARA came along, the Hallauers were only able to accomplish smaller projects. MARA provided the finances to paint the building.

MARA is a non-profit organization committed to Lakeside and the historic Maine Avenue business district. They raise money by old fashioned fundraising and grant application. Within the downtown Lakeside area, MARA has funded historic murals, awnings, signage and trash collection. They were also involved with the utilities undergrounding several years ago and the “cactus garden” at the north end of town. For more information, check out their Facebook Page or call them at (619)443-1133. 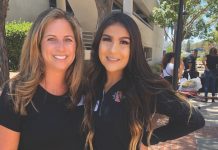 Kick up your heels at La Mesa Friday night dances