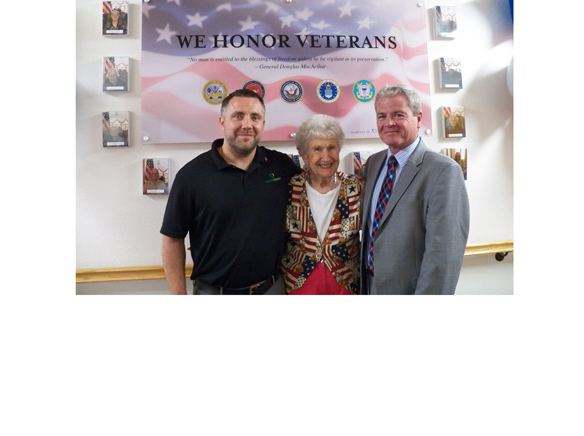 Memorial Day ceremonies are always poignant, for remembrances of those military service members who paid the ultimate sacrifice of giving their lives in defense of this nation and their fellow citizens’ rights and liberties. None of those being honored are present as they are being remembered with love and gratitude. And even some Veterans Day observances seem distant from those being acknowledged, for generally commemorating military service branches or specific, limited combat engagements.

Memorial Day ceremonies are always poignant, for remembrances of those military service members who paid the ultimate sacrifice of giving their lives in defense of this nation and their fellow citizens’ rights and liberties. None of those being honored are present as they are being remembered with love and gratitude. And even some Veterans Day observances seem distant from those being acknowledged, for generally commemorating military service branches or specific, limited combat engagements.

El Cajon’s Good Samaritan Retirement Center did an about-face on those relatively impersonal forms of recognition for service and sacrifice, with dedication of a Veterans Honor Wall on Oct. 6. The wall honors those 13 senior-age veterans currently living in the facility, almost 20 percent of center residents.

Around 50 attendees filled the area off the retirement center lobby, where resident seniors, Good Samaritan staff members and supportive community leaders participated in the dedication ceremony. Jason Ford opened the gathering as trumpet soloist, playing two military-themed movie music compositions. Susan Sorensen, administrator of the center, welcomed guests and residents, noting that the project had been some months in planning, and saying, “We want to say thank you to veterans here.”

Sister Alexandra of the next-door convent then took the podium. The Chaldean Sisters Daughters of Mary Immaculate Conception own and operate the senior living facility. Sister Alexandra said, “This is a really special day for us.” She asked attendees to observe a moment of silence for the souls departed in the Las Vegas massacre. She remarked that veterans have given of themselves to protect the country, and she urged those offering prayers to ask that America continue to be protected. She led the audience in reciting the Lord’s Prayer.

Wes Schermann, Commander of El Cajon American Legion Post 303 delivered brief comments. “We have a lot to be thankful for, especially these veterans and their families who supported them and prayed for them,” Schermann said. “Younger veterans look up to the ones who went before them.”

Derrik Staples, volunteer coordinator and veteran liaison with Apreva Hospice, led the honors portion of the ceremony, with reading of the names and branches of service for the 13 resident veterans being honored on the wall that day. Members of the Patriot Guard stood at attention alongside and saluted as each name was read. Later, after the ceremony, Staples said, “These men and women deserve utmost thanks for the sacrifices they made.”

Millie Kearney was one of the honorees. She spoke after the wall unveiling about pride in her short military service as a Navy Corps Wave, a military service position today known as corpsman. “This is certainly a great honor,” Kearney stated.

She joined the Navy when she was 17. She is now 91. “I was too young,” Kearney said. She met her husband at Oak Knoll Hospital in Oakland, they married in 1945, and then they moved to the San Diego area. Six of her children still live in East County. “This is amazing, how many veterans are here at Good Samaritan,” she continued. “We receive wonderful care. It’s a real blessing to live here.” She has been living in the facility for about 2 1/2 years and relayed that she is “pretty independent.”

Noel Sullivan moved to San Diego from Ireland 10 years ago to set up operations as CEO of Apreva Hospice. His father was in the Royal Air Force during World War II. “Our inspiration for this was a need to make sure our veterans are revered for the immense sacrifices they’ve made along with their family members. I’ve really felt an affiliation with American military service people, because when they entered the Second World War, they changed the course of history, not only with the war effort but also in the recovery of nations in Europe afterward. We think this is a great honor for us to be able to recognize these veterans.”

Good Samaritan Retirement Center occupies nine acres at 1515 Jamacha Way, including a park and a planned memory care center in the offing. The center is Catholic-based but open to seniors of other beliefs, described as “a loving place to live.” Information on the center can be found at www.goodsamretirement1.org.