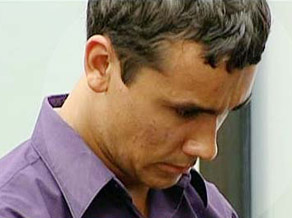 EL CAJON — An 18-year old Lakeside racing with another driver which crashed, killing two East County teenagers, was ordered him to stand trial for two counts of gross vehicular manslaughter (while under the influence of marijuana).

EL CAJON — An 18-year old Lakeside racing with another driver which crashed, killing two East County teenagers, was ordered him to stand trial for two counts of gross vehicular manslaughter (while under the influence of marijuana).

The 16-year-old boy from Lakeside is facing similar charges in Juvenile Court, but the two cases are not yet joined.

Attorneys saved time in the preliminary hearing by not calling witnesses from the medical examiner’s office and stipulated that both victims, Anthony Tatum Foreman, 18, and Jayli Campbell, 16, both died from blunt force trauma. They were passengers in the juvenile’s Volkswagen Passat, which hit a center divide and flipped over, possibly up to seven times.

There were no injuries to passengers in Johnson’s Volvo, as he stopped at the scene of the horrific crash and assisted. Johnson told CHP officer Mark Maldonado at the scene the Passat “raced around him.” He initially denied racing, but then admitted he had been racing, CHP officers said. Then he repeatedly denied racing at all.

Officer Pascal Huoth told San Diego Superior Court Judge Robert O’Neill he overheard Johnson tell his passengers to say “75” as in mph he was driving. Huoth said he asked one passenger if Johnson told him to estimate 75 as how fast he was driving, but the passenger didn’t reply.

CHP officer John Perryman testified he was trained to recognize drug users and that Johnson “definitely exhibited some signs of impairment.” Perryman said Johnson, during a 5 a.m. interview, had a green coating on his tongue which indicated past marijuana use. He said Johnson admitted to smoking marijuana 48 hours before the crash.

In another stipulation, attorneys agreed that Johnson’s blood was properly drawn and the result showed he tested positive for marijuana use. The test didn’t show how much or how little marijuana was smoked, only that it was in his blood.

Perryman said Johnson was under the influence of marijuana at the CHP station, adding “this was six hours after driving.” He said Johnson was sweating, had rigid muscles, and had elevated pulse and temperature. Johnson was also cooperative, he added. Another officer said Johnson had red eyes.

CHP Officer Brad Clinkscales testified he interviewed the 16-year-old driver in a gurney in the hospital with his parents beside him. The teen-ager also knew Johnson, and both drivers left after teens spent time at a bonfire at La Jolla shores.

“He said his accelerator stuck,” said Clinkscales, who added that the teen driver said he drove at 110 mph and he lost control after hitting the center divider.

This is the third auto accident the 16-year-old has had, according to Clinkscales. He said the boy told him “the other two collisions, he was rear ended, and not his fault.”

There was a floor mat, and he moved it back and forth to see if it could become stuck on the pedal, said Carlson. He said the mat fell off the pedal easily.

Johnson’s lawyer, Russell Babcock, said the testimony about marijuana use was “totally speculative,” as it could have been in his system for days. He unsuccessfully asked the marijuana influence charge be dropped.

“Can my client be held responsible for the deaths…Absolutely not. Mr. Johnson did the responsible thing. He stopped at the scene and helped,” said Babcock.

“He’s not legally or morally responsible for the accident,” said Babcock, adding there was “an absence of proof” of racing.

Deputy District Attorney Kristen Spieler said Johnson acted as “an aider and abetter” to the crimes and both drivers phoned each other minutes before the crash. O’Neill said the prosecutor had “met the burden of proof” for a preliminary hearing and set a trial date for June 15.

Johnson pleaded not guilty at the hearing’s conclusion. He remains free on $50,000 bond. He previously has surrendered his driver’s license as a bail condition. The16-year-old remains in Juvenile Hall and he has a hearing May 15.