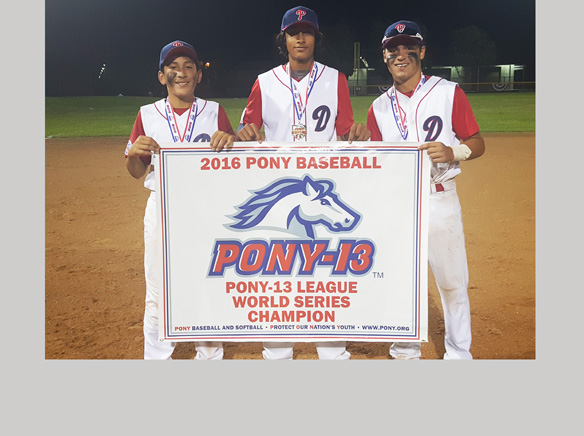 The Emerald Pony League field is nestled in the center of El Cajon. It is about to become a youth baseball landmark after two of its team’s snared World Series championships over the weekend.

The Emerald Pony League field is nestled in the center of El Cajon. It is about to become a youth baseball landmark after two of its team’s snared World Series championships over the weekend.

Emerald Pony League coordinator Mingo Villa said the league’s two World Series championships on the same weekend may be unprecedented in Pony Baseball, according to information he has received.

“All the Pony League directors I’ve talked with have been impressed by how Emerald has turned its program around and they’re looking forward for more good things to come,” Villa explained. “The league is overwhelmed with joy — the players, the parents and the city of El Cajon.”

Villa said plans are in the works for a public event showcasing the two World Series championship teams. An announcement will be made when plans are finalized, Villa noted.

Twenty of the team’s 21 wins ended in 10-run mercy-rule decisions this summer.

The El Cajon-based all-star team accumulated four championship banners and a 15-1 record en route to claiming the Pony-13 World Series title. Ironically, the one loss was to rival Emerald Crimson in the region tournament back on July 10.

Emerald promptly got back to its winning ways by sweeping through the ensuing West Zone and World Series tournaments. Monday’s win over Panama was its ninth consecutive to close out the season.

If Baptista, Nankil and Armas’ names are familiar, they should be. All three players helped guide Sweetwater Valley Little League 12U all-star team to last year’s Little League World Series in South Williamsport, Pa. The Sweetwater Sluggers placed third in the United States division following an extra-inning loss to Texas in the challenger bracket final.

Sweetwater Valley lost to Texas twice in the tournament: they beat every other Little League team in the United States they faced in 2015.

They lost only one game on their magic carpet ride this summer. It all came together on Monday.

Emerald scored 12 runs on 12 hits while Panama was held hitless in the contest with six errors.

Richardson went two-for-five at the plate with two runs scored and one RBI while pitching hitless ball. Pulido and Nielsen each drove in two runs and scored twice while Mayer scored twice and drove in one run. Arreola collected one RBI.

Nielsen drove in two runs with a ground-rule double in the fourth inning.

Emerald defeated Minatitlan, 16-0, in the semifinals. Emerald pounded out 16 hits in the contest while limiting the Mexico Zone representative to just five hits.

Baptista swung the big stick with three hits, three RBI and two runs scored while Nankil drove in two runs on two hits and scored three runs. Armas had one hit and scored one run.

Emerald defeated Alea (Hawaii) twice, as well as California rivals Campbell and Covina once each, at the preceding West Zone tournament July 21-24 in Whittier after going 3-1 at the Southwest Region championship tournament July 6-10 in Lakeside.

Emerald’s Mustang-9 team participated in five tournaments en route to winning this year’s World Series championship – the first for the league at that age level.

The El Cajon team started its monstrous world championship odyssey by first winning the San Diego East/South Section tournament held June 18-26 in Ramona. Emerald went through the nine-team field undefeated in five games. Emerald opened the tournament by defeating La Jolla Blue by a score of 19-0, then defeated Ramona by a score of 19-8 in its next game to continue to advance in the winners bracket.

But the outcome ended with a 12-0 victory in favor of Emerald to claim the section championship and the first of its five post-season banners.

Emerald upped its record to 9-0 after winning all four of its games at the region tournament. The El Cajon team made a statement in its first game after defeating the San Marcos Grizzlies, the third-place team from the San Diego North Section, by a score of 24-2. Emerald then defeated Escondido, the San Diego North Section runner-up, by a score of 11-7 to advance to the winners bracket final.

Emerald defeated region tournament host Carlsbad, 10-3, to advance to the championship game. Carlsbad then defeated San Marcos Strong, the San Diego North Section champion, by a score of 13-1 in the challenger bracket final to earn a championship rematch against Emerald.

Emerald won its second championship banner by defeating Carlsbad by a score of 17-8.

Emerald defeated Charter Oak, 9-0, in its first game and then defeated Olive, 9-1, in its second game. Emerald then defeated Whittier Select, 12-3, in its final bracket game to meet Irvine, the winner of the other bracket, in the championship game.

Emerald shut out Irvine, 4-0, to win the tournament championship.

Two teams advanced from the Southern California Super Region to compete in the West Zone tournament. Emerald receive the No. 1 berth and Simi Valley received the No. 2 berth after defeating Irving, 10-9, in eight innings in a playoff game for second place.

Despite the move up a notch in competition level, Emerald continued its winning streak by defeating Seattle by a score of 20-2 in its first game at the zone finals. The El Cajon team then turned back a challenge from Scottsdale in its second game to win 15-9.

Emerald drew a rematch against Scottsdale in the semifinals and defeated the Arizona team by a score of 15-4 to advance to the zone championship game against Hilo. Emerald defeated the Hawaii team, 13-7, to earn a berth in the Mustang-9 World Series.

Emerald scored 55 runs and allowed just four in a gathering of the world’s elite teams.

The spotlight was clearly on El Cajon.

Grossmont Griffins remain at the top of the PCAC men’s water...