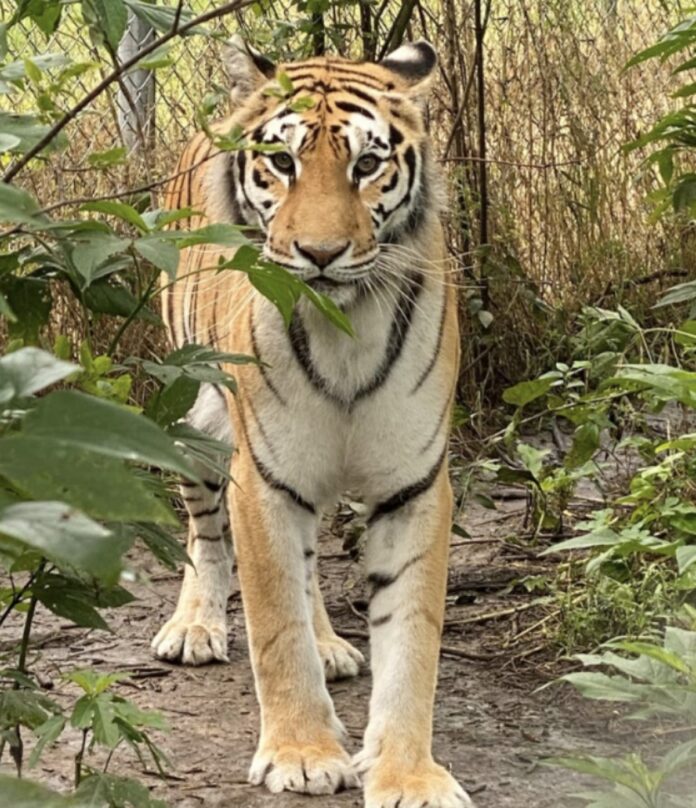 In early June, Lions Tigers and Bears founder and director Bobbi Brink set out with a four-wheel drive vehicle and an estimated budget of about $3.50 per mile to rescue four big cats from an abandoned zoo in Oklahoma.

After contending with a field full of alligators, Brink and her crew pulled out a wounded tiger-lion hybrid ‘liger’ slated to receive medical care at the Oakland Zoo, another tiger who will also live out her days at the zoo, an elderly lion who will now live at Turpentine Creek Wildlife Refuge in Arkansas and a tiger who now calls the Lions Tigers and Bears facility in Alpine home.

Turpentine Creek president and founder Tanya Smith said sanctuaries are “the last stop” for exotic animals that would otherwise be destroyed. She, Turpentine animal curator Emily McCormack, Brink and others who serve together on the Big Cat Sanctuary Alliance and worked together to complete the joint rescue.

“With this rescue, the lion was in such poor health that we thought it was pretty immediate we needed to get her out. We reached out to Bobbi because she’s got the best rig with air conditioning to go across the desert,” Smith said.

Although it is not uncommon to work together and remove animals from uninhabitable or unsafe conditions, Brink said each rescue is a little different.

“We network and try to get a rescue all organized before we leave the ground. How many miles can we drive? Where are we going to stop? We try to get it all in place,” Brink said and although hotels often help out with water hoses and amenities along the way, the reality is rescuers are still crossing the country with large, exotic animals that might be injured or in poor health.

Once a public business no longer needs a license, the United States Department of Agriculture is out of the picture, Smith said, so nobody is inspecting facilities or keeping track of animals. Both she and Brink said animals are often malnourished, injured or neglected.

“When we took the 68 cats out of the Tiger King park in Oklahoma, we were able to identify who the main players were through the Big Cat Alliance. Usually, when you find out there’s animals in need, there’s a quick process. Because we are good at our jobs and have been here so long, the Department of Justice will call us. The rescue is just the beginning,” Smith said.

Once rescued, the sanctuaries have to be ready with a clean environment, veterinary care, enough funding to provide for the animals. For example, Brink said the tiger who came to Alpine, now named Kallie, “had a really bad declaw and has never had pain medication” but is now settling in on soft straw to make walking easier. She is scheduled for x-rays on July 9 so staff can get a better sense of what is going on inside her injured feet.

“She’s going to have a physical and we’ll learn more when we get her on the table. I’m guessing she’s about 10 or 12 years old. When we get a good look at her teeth we’ll have a better idea.

She was initially scared of people but she pretty quickly learned ‘I’m going to get fed by them’ and she’s jumping right in the transport cage now (where the animals are fed) and she’s gaining weight and doing well. You can’t throw food at them too fast, you have to do it slowly,” Brink said.

Normally, she said, they would not partner with a zoo but the Oakland Zoo had space for two rescues and, in a first for Brink, donated money to help pay for transport. Brink said she is optimistic zoos might be taking an interest in serving as sanctuaries and provide homes for animals with no intention of breeding them.

“We have to prevent surplus animals. I feel like my interns, the 20-year olds are going to make a huge decision: do we keep breeding animals in captivity or work on keeping them in the wild. If we are breeding them, we have to get our breeding plans together so there aren’t any surplus animals that go out the back door,” Brink said.

Both Brink and Smith say it is important to push for the Big Cat Safety Act, a pending federal bill which would essentially ban private tiger ownership. Their experiences in rescue share the same key points, repeatedly: inexperienced people adopt a young, exotic animal and are overwhelmed when it grows up.

“We see people who are just ignorant of what it takes for people to take care of an animal of this magnitude, who put them in a cage as a cub and they’re just stuck there for the rest of their life. We’ve been here 30 years and rescued over 500 animals. My parents and I started this rescue in 1992 and there’s still such a need, it makes me crazy,” Smith said.

If the bill Big Cat Safety Act doesn’t ever pass, she said, rescue advocates will shift to focusing on education at the state level.

“What we’ve been thinking, through the sanctuary alliance, is to come up with a plan that would work for each state. Authorities don’t always know where the animals are. We once rescued 40 big cats from a place where a 72-year-old lady with cancer was trying to care for them all. The sheriff at the time said if I hadn’t found out about them, he would have had to shoot them,” Smith said. Still, Smith said, building an alliance is helping rescues help each other.

“The good thing about the alliance is we can share who we are, what we’re doing, what we need, and it works to make rescues better. Maybe we’re not able to house a rescued animal but can provide trailers. We all help each other,” Smith said.