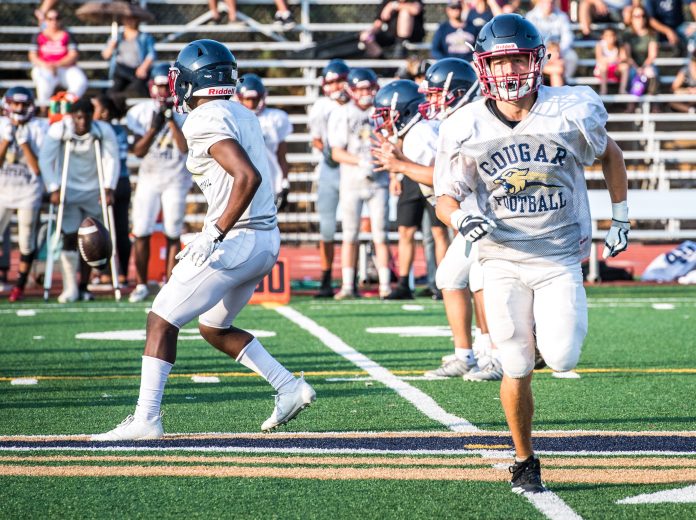 The Helix Highlanders were anointed the unofficial title as the county’s No. 1 ranked team heading into the 2018 varsity football season when the county media poll was released on Monday afternoon.

The Helix Highlanders were anointed the unofficial title as the county’s No. 1 ranked team heading into the 2018 varsity football season when the county media poll was released on Monday afternoon.

The back scored two touchdowns in a 35-0 scrimmage win over host Mira Mesa last Saturday at the SDNFL Kickoff Classic.

The Steele Canyon Cougars, which won a state bowl game championship last season, as well as, the section’s Division II title, was tabbed as the county’s 10th-ranked team by the area panel.

The Cougars, who have moved up to Division I, open at No. 12 Carlsbad in a sure toss-up.

Steele Canyon has possibly the best 1-2 running back combo in the East County with senior Kenneth Watson and explosive sophomore newcomer Wes Neely.

The Granite Hills Eagles were inside of the top 20 in the preseason poll following their shift back into the Grossmont Hills League after winning the Hills title last year.

The Monte Vista Monarchs were tabbed inside the top 25 after winning the section D4 championship last year and making a state bowl game championship appearance of their own behind San Diego State-bound superstar Jahmon McClendon, the East County’s top returning offensive player.

The Monarchs, which also boast Montana State-bound linebacker Blake Schmidt meet Mar Vista at home on Friday night. The best of the rest might be the most overlooked, as the Grossmont Foothillers failed to receive a vote from the media and experts.

But Grossmont might have the most explosive offense in the East County behind junior quarterback Jamie Odom, who passed for nearly 2,000 yards last season – and a trio of receivers – Thomas Mangum, Desmond Carter and Zak Farris – who combined for 82 receptions and 16 touchdowns.

And Grossmont touts a strong set of linebackers, including senior Alex Golojuch and junior Chris Alba.

The Foothillers host Bishop’s on Friday in a game sure to feature plenty of offense.

Two East County clubs face each other in Lakeside when Christian High drives up the 8 to El Capitan.

Christian’s Alex Gonzalez is one of the area’s speediest playmakers, while the Vaqueros promise passing behind a healthy Wick Hauser.

The Santana Sultans won The Battle at the Shores passing league behind new quarterback Nathan Temple and have a rising defensive star in Cameron Lariccia.

The Sultans hosts Mountain Empire, from Pine Valley, in the opener. The RedHawks feature two-way stars Dallas Prince and Cameron Will, brother of the late MEHS football star, James Will.

Osborn, a former All-Mountain West second-team defensive star at SDSU, is no new-comer to the Braves’ campus, however, serving as a math teacher, as well as, helping coach ECVS’ resurgent boys’ soccer program.

The Mount Miguel Matadors may have made the biggest news during the offseason with the hiring of former Helix and Taft High coach Troy Starr.

The Matadors have a mountain to climb, but couldn’t imagine find a better guide eager to get back in the game with a terrific challenge. Mount Miguel defensive star Manu Maosi will get full opportunity to show his skills when the team travels to face a Morse squad that looked impressive in a scrimmage last Saturday against El Capitan.

The Wolf Pack’s chances are enhanced by their placement back in the Grossmont Valley League, where they last won a championship in 2014. The Pack will have a long trek out to El Centro to take on the Southwest Eagles in the opener. Valhalla, under new coach Mike Kastan, a 10-year assistant, will open the season on the road against veteran University City squad.

The Foothills Christian Knights are one of the county’s top eight-man football teams and Joe Mackey’s program is on a roll right now. FCHS will face tough opponents in the Ocean League, including league rival Calvin Christian.

The Knights open the season next week at Seau Field against Victory Christian, of Chula Vista. 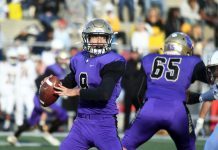 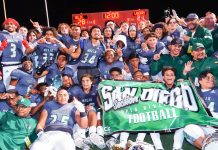 Helix and Grossmont wrangle for the coveted musket for the 68th...