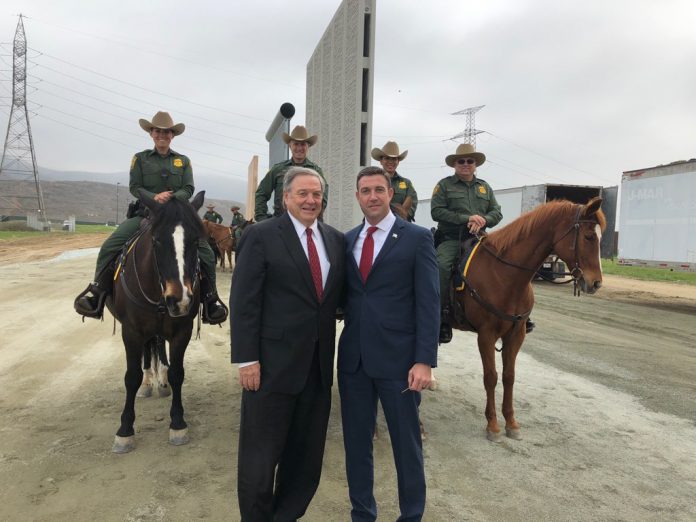 Rep. Duncan Hunter, 43, and his wife Margaret Hunter, 41, were indicted by a federal grand jury Tuesday with charges that they used more than one quarter of a million dollars in campaign funds for personal use.

Authorities in the U.S. Attorney’s Office contend the Hunters engaged in a conspiracy to commit offenses against the United States, wire fraud, falsification of records and prohibited use of campaign contributions for personal use, totalling more than $250,000, between 2010 and 2017.

Rep. Duncan Hunter, 43, and his wife Margaret Hunter, 41, were indicted by a federal grand jury Tuesday with charges that they used more than one quarter of a million dollars in campaign funds for personal use.

Authorities in the U.S. Attorney’s Office contend the Hunters engaged in a conspiracy to commit offenses against the United States, wire fraud, falsification of records and prohibited use of campaign contributions for personal use, totalling more than $250,000, between 2010 and 2017.

Margaret Hunter had access to campaign funds when she had no official role in the campaign, and when she was employed as Hunter’s campaign manager, according to the indictment.

During one of the many Hunter family vacations, the congressman and his wife spent $6,288.74 in campaign funds at the Aston Kaanapali Shores resort in 2015.

During this trip Duncan Hunter attempted to set up a day tour of a U.S. naval facility in Italy to justify using campaign funds. According to the indictment, after navy officials told Hunter they could only provide a tour on one particular date, Hunter did not tour the naval facility and proceeded to tell his Chief of Staff “tell the Navy to go f*** themselves.”

Jim Means has lived in Alpine for 27 years and teaches physics at Cal State San Marcos. In a message to The Sun, Means said he was a registered Republican for most of his life, until he switched to being independent when the Republican party began rejecting man-made climate change.

“Even if the office were held by someone I liked politically, if they took money from their campaign funds and used it for personal enrichment, I would expect them to resign, at the very least,” Means said. “I’m not impressed with the argument that Rep. Hunter re-paid these funds—he didn’t do that until after he got caught.”

Reached via social media, Danielle Brannan, who lives in Hunter’s district, emailed a response stating she hopes her congressman resigns.

“I know this is a very conservative district, but I hope others are able look beyond party affiliation, realize the shame that this man has brought to his office, this district, and this country, and ask for the same.”

From 2010 to 2017, the Hunters racked up $37,761 in “overdraft” and “insufficient funds” bank fees, according to the indictment, demonstrating that they had knowledge that they could not afford these purchases using personal funds.

The indictment notes that Hunter repaid $48,650.98 to the campaign in Nov. 2016, to compensate for “unauthorized expenditures” the Hunters made, after being questioned by the FEC and The San Diego Tribune.

Hunter characterized the repayment as being for “unauthorized expenditures” that he now deemed either “personal in nature” or “without adequate support,” and “continued to conceal more than $200,000 in personal expense the Hunters had illegally paid with campaign funds,” the indictment reads.

The Hunters will be arraigned on Thursday, Aug. 23, in federal court before U.S. Judge Magistrate Judge William V. Gallo.

“One of the pillars of our country since its founding is that those tasked with enforcing the law would do so in an unbiased manner, allowing evidence to dictate how cases should run, with nothing impeding the rule of law.  Unfortunately, this is not the case today.  The fact is that there is a culture operating within our Justice Department that is politically motivated.

“We are seeing this with President Trump; we are seeing this with my case.  This is evidenced by the fact that after two years of investigating, the Department of Justice decided to take this action right before my election. For over two years, I have made myself available to cooperate with this investigation in any manner.  To date, I have not been asked one time to answer any questions or address any issue.  I have not had one opportunity to present my side of anything in this investigation or to counter any allegations against me.

“All the while, there has been a constant barrage of misinformation and salacious headlines in our media regarding this matter.  I purposely choose to remain silent, not to feed into this witch-hunt and trust the process.

“I have focused on one thing; doing the job with which I was elected to do.  I have worked to represent my constituents, voting on policy issues that I believe would benefit our nation and opposing those that would do us harm.  I have helped those having problems with federal agencies and advocating for those who have fallen through the cracks of bureaucracy.  This is what I will continue to do, these efforts will not stop, and I am not going anywhere.

“The actions of the Justice Department speak for themselves.  It is a sad state of affairs when those entrusted with upholding the law have no appreciation for following the rule of law.  Consider this; overwhelming evidence indicated that Hillary Clinton took direct action to circumvent investigations into her campaign, she was interviewed and no action was taken.  After two years of investigation into my campaign, I have never been interviewed and they made a decision to prosecute.

“Additionally, three prosecutors, two of which are directly involved this case, attended a fundraising event at a private home in La Jolla in 2015, one of which was the individual who signed the indictment.  We know these individuals attended this event from 9:00-12:00 noon during working hours.  We are told that this was at the request of Secret Service to officially assist law enforcement with protection, but this explanation is disputed by former U.S. Attorneys familiar with the responsibilities of their office.  The obvious question is why would the Secret Service need three prosecutors at a fundraising event?  The answer is they are partisan prosecutors.

“My constituents are not easily misled.  I know they can recognize a political agenda when they see it and they can disregard empty rhetoric when they hear it.  I fought for our nation against terrorists in the Marine Corps.  I fight for my constituents in the halls of Congress.  I will fight this in the same manner and with the same level of determination because I believe in what I am fighting for and still have faith that evidence and the rule of law will trump political agendas and bias.”