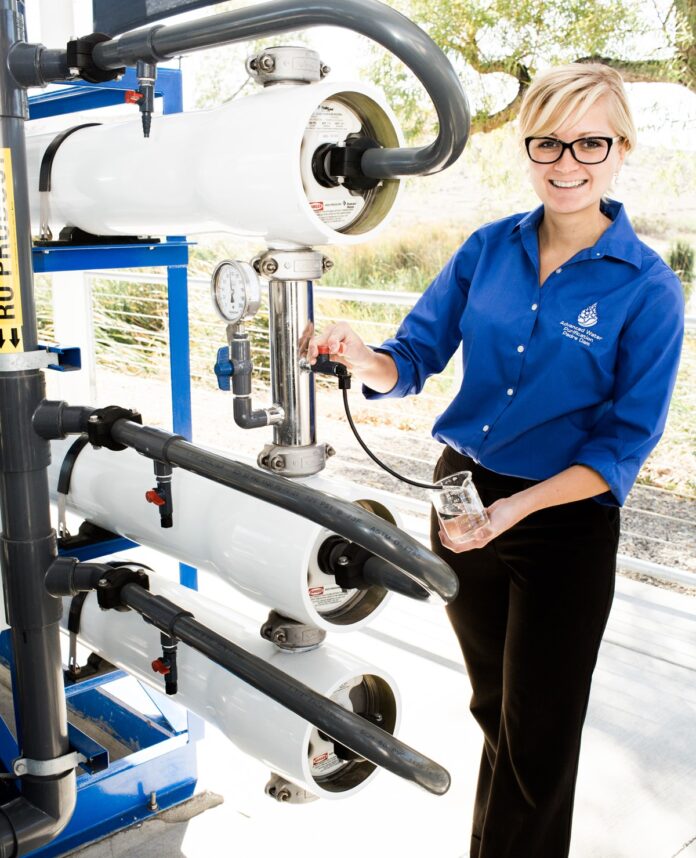 On June 1, elected official, water industry leaders and city representatives’ broke ground on the East County Advanced Water Purification Program at the future site of the East County AWP Joint Powers Authority in Santee. Scheduled for completion in 2026, this project is a groundbreaking environmental project for East County, providing nearly one-third of the regions needs generating 11.5 million gallons of water per day, and nearly 30% of current drinking water demands for East County San Diego residents, and decreasing reliance on wastewater systems discharging into the Pacific Ocean. Most important, utilizing wastewater, this large source of drinking water is drought resistant.

“The Colorado River is in bad shape. For the first time in its history, it is in a shortage declaration,” said Padre Dam Municipal Water District Outgoing CEO/General Manager Allen Carlisle. “You have seen the pictures of Lake Mead being so low that they are now finding things at the bottom of the lake that they did not know existed. These kinds of projects are going to be more and more prevalent up and down California as we move forward and as we are dealing with the changes in how our climate is behaving. The other benefit is that we are capturing 15 million gallons of wastewater every day and it flows right through Santee. And, instead of it traveling 20 miles all the way to Point Loma, where it is partially treated and put out into the ocean, we are discontinuing that. We are not discharging into the ocean any longer. We are treating it here and reusing for beneficial use.”

Carlisle said program is essential because most of East County’s drinking water is imported from hundreds of miles away from the Sacramento Bay Delta and the Colorado River, the cost of imported wastewater treatment continues to rise, California will always face unpredictable draughts, imported water and wastewater treatment rising costs are out of local agencies’ control, imported water requires an enormous amount of energy to transport, and the majority of East County’s wastewater is treated and discarded into the ocean.

Carlisle said born and raised in East County, he is excited to be part of this project. He said this project means water security for East County and more control over wastewater costs.

“Projects like this protect our way of life and our economy,” he said. “This project is going to create 30% of our water needs and that creates stability.”

This is a “massive” capital project, said Carlisle. One of the largest capital investment projects in East County’s history.

“So, the wide variety of trades, positions, and jobs that this is going to create for the next four years is tremendous,” he said. “Part of the desire of these joint venture firms that are building these facilities is to utilize local talents to make this happen to the greatest extent possible. Long-term, we are bringing on about 35 new positions. These are good, high-paying jobs right here in East County. All of this is beneficial for East County.”

Carlisle said the East County AWP JPA is a separate entity made up of San Diego County, the city of El Cajon, and Padre Dam Water District. These three agencies make up the JPA.

“Padre Dam will be the administrator and operator of the project,” he said. “We have a contract with the JPA, partially because we have been the lead agency from the beginning. The Helix Water District is not part of the JPA, but it is a contract partner, buying some of the water produced at the facility.”

Carlisle said that the JPA is treating water at an advanced level.

“Then we are putting our water into Lake Jennings,” he said. “Then it is treated one more time at a general water treatment plant before it is distributed.”

Carlisle said the city of San Diego is working on a similar project of this caliber, the Pure Water San Diego Program, which will provide more than 40% of San Diego’s locally water supply by the end of 2035.

“Theirs is a larger project than ours, and they are working on the project as we speak, so it will be a race to see which one gets done first,” he said.

Though the technology is advanced, the concept is simple.

Wastewater from homes and businesses is collected for treatment. Then treated at the JPA where it goes through a four step purification process, the water is mixed with water at Lake Jennings, then treated at the Helix Water District’s R.M. Levy Water Treatment Plant before clean, safe, high-quality water is delivered back to homes and businesses.

The JPA guaranteed maximum price for construction is set at $950 million. To date, this project has secured $131 million in grants and incentives and $489 million in low interest loans.