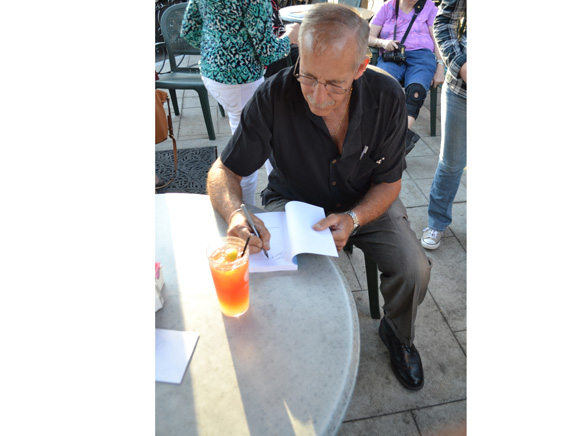 Kurt Vonnegut, the late author of novels such as “Slaughterhouse-Five” and “Cat’s Cradle,” once offered advice on punctuation etiquette regarding semicolons.

“Do not use semicolons,” he said. “They are transvestite hermaphrodites representing absolutely nothing. All they do is show you’ve been to college.”

Kurt Vonnegut, the late author of novels such as “Slaughterhouse-Five” and “Cat’s Cradle,” once offered advice on punctuation etiquette regarding semicolons.

“Do not use semicolons,” he said. “They are transvestite hermaphrodites representing absolutely nothing. All they do is show you’ve been to college.”

In the centuries since Aldo Manuzio invented the semicolon, a publisher working in Venice circa 1500, writers have held dogmatic views concerning the illustrious, little mark. Jim Cunningham, 59, an El Cajon resident and author of the new novel “Chasing Smoke,” is one of them. (Hint: Vonnegut’s bigoted assessment of the semicolon is the opposite of Cunningham’s.)

“I love semicolons,” Cunningham said, in between sips of iced tea, sitting at a table in the patio of El Cajon’s Downtown Cafe during a recent book signing. “Nobody uses them. They’re wonderful, wonderful things.”

A former lieutenant for the El Cajon Police Department, Cunningham retired after 28 years of service in 2005. He said it took “8 months, 28 years” to write “Chasing Smoke,” which was finally published in October 2014, with plenty of semicolons.

Cunningham said he named his book “Chasing Smoke” because of personal experiences as a detective in hot pursuit of elusive suspects, which he fondly remembered was like “chasing smoke.”

Cunningham described his book as a detective thriller/romance novel. And although it mirrors his own life in many ways, Cunningham pointed out in the novel’s foreword, “The characters and events in this book are fictitious. Any similarities to real persons, living or dead, is coincidental and not intended by the author.”

In “Chasing Smoke,” the line where truth ends and fantasy begins is never quite clear.

Cunningham’s protagonist, Detective Jim Lansang, suffers setbacks both personally and professionally. Assigned to a rape-homicide case, Lansang enlists the help of his ex-wife, Anne, a sex crimes investigator. Their investigation advances—as does their renewed relationship—and Lansang has no idea what unexpected woes lay ahead.

At his March 20 book signing, Cunningham greeted fans and inscribed books for nearly three hours, as the sun set and a band played nearby. Dozens of his friends, family members and former colleagues stopped by to show support, and Cunningham said he was “overwhelmed” by the amount of people.

Melinda Mesmer, one of Cunningham’s editors, said the two have been friends since they were teenagers in high school.

“He had a thing about semicolons and awfully long compound sentences,” she said, smiling. “I had my work cut out for me.”

Upon hearing this, Cunningham perked up.

“She’s a semicolon hater,” he said.

“When you look at a police man’s life, especially a detective’s life, there’s a lot of stories that accumulate,” she said. “It gives you a different view of what police work is all about. It’s not all about just fighting crime.”

“There’s a thing in the novel that I write about called ‘The Hour of Regret,’ which for a cop means waking up at three o’clock in the morning and then thinking about the cases that you didn’t solve and what you should have done right and what should have done better.”

Try to solve these problems early, Cunningham said, “If you don’t, they will stay with you, all the way down the road.”

Cunningham’s second novel in this series, “Melting Ice,” will be released in May.

Cooking 4 Life, the way to healthier cooking and eating for...