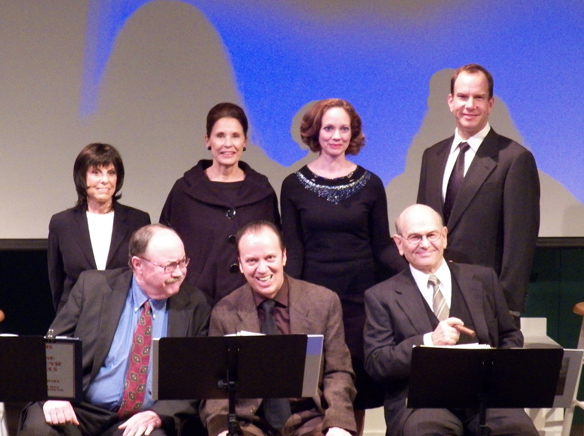 A New Year, a new theater space and the first show of the calendar year is a fresh start for the oldest continuing community theater troupe in San Diego County. Those distinctions aligned for Lamplighters Community Theatre of La Mesa, as the stage performance group kicked off 2015 by opening an original play on Jan. 16, which concluded with the audience delivering the cast a standing ovation.

A New Year, a new theater space and the first show of the calendar year is a fresh start for the oldest continuing community theater troupe in San Diego County. Those distinctions aligned for Lamplighters Community Theatre of La Mesa, as the stage performance group kicked off 2015 by opening an original play on Jan. 16, which concluded with the audience delivering the cast a standing ovation.

The play, which ran through Jan. 25, was a minimally staged Readers Theatre production of “Louis and Irving, The Movie Moguls,” an original two-act piece by San Diego’s David Wiener, who was recently named Playwright in Residence at the newly re-opened Lamplighters Theatre. The production harks back to the glory and glamour days of Metro-Goldwyn-Mayer moviemaking, and the “doomed relationship” between Louis B. Mayer and Irving Thalberg, the two men who together shaped MGM into the greatest studio in the world.

The seven cast members mostly remained seated behind music stands that held their scripts. The set was minimal, the props only small hand-held items, and the costuming also merely suggestive of Hollywood garb in the 1920s and 1930s.

The show, including intermission, offered two hours of quality, well-paced entertainment, especially for anyone fascinated by the golden history of Old Hollywood. The bare-bones approach actually enhanced this production, by sharpening focus on the storyline interest and relationship development, as well as highlighting the acting skill and stage presence of the performers.

The play’s major artistic device was a staggered series of flashbacks and fast-forwards between original events and the May 20, 1970 auction of over 10,000 items owned by the studio, in what was dubbed “the sale of the century.” Jim Sprague (as Mayer) and Frank Godinez (as Thalberg) had the leading roles. Fran Marsh and Michelle Burkhart played a mature version and a contemporaneous younger version of Esther Linderman, longtime executive secretary for Mayer, respectively, providing the explanatory background links across the span of nearly five decades. Supporting cast members were Dave Rethoret (as auctioneer) and renee levine (appearing as both 1970’s reporter and play narrator).

Mark Loveless has been serving in the doubly dual roles of president-artistic director of the theater organization and actor-director for the current play in production. His on-stage character was “heavy” Nick Schenck, brought in from the Loews theater chain to oversee new merger operations of the silent-film company then run by Mayer and Thalberg, which was transformed into the premiere cinema studio of Old Hollywood through the era of introduction of the “talkies.”

Sprague, acting since 1969, discussed his lead role as Mayer. He described Mayer as a “man of temperament,” and the character as “a lot of fun and interesting, because Mayer wanted both to be in control, and to have people like him.” He further told of the difficult constraints of playing an active man while sitting down on stage most of the time. He said the range of emotions he portrayed during the play “run the gamut, from bombastic to being heart-broken at the last.”

Sprague said his greatest challenge in this role was pacing the emotions, “Letting it happen and not running away with it.”

The company performed its last permanently housed show at the Ben Polack Art Center on Aug. 20, 2006, before that center was demolished. A grand re-opening was staged over the weekend of Nov. 21-23, at the company’s newly remodeled theater space in the La Mesa Village Station shopping center. That holiday-season, first-in-house production was the romantic comedy “Same Time, Next Year,” which ran through Dec. 21. Three former retail spaces in the mall were transformed into the comfortably spacious but cozy theater area, adjacent offices and lobby. With a seating capacity of around 90, including cutout areas for wheelchair viewers, the closeness of the theater seats to the stage invites audience members into immediate involvement with the actors’ interactions.

Loveless is enthusiastic about the new performance venue’s accessible location for longtime patrons and season ticketholders from La Mesa, and the convenience of ample close-in parking slots for weekend theatergoers arriving at a weekday shopping mall.

Plans for the theater company will continue as before, with five productions per theater season annually, usually two comedies, one drama, one mystery and one musical. Other intervening offerings will include a children’s theater program, dramatic readings for the blind, and training opportunities for people wanting to learn about the technical, artistic and administrative aspects of the craft of theater production.

The non-profit group, which is reliant on unpaid volunteers, is seeking contributors, members and performers. Upcoming auditions for discovering new talent will be held on March 15 – 16. On the organization’s wish list for finishing touches to the new theater include a computer desk and bookcases, flat screen monitors for the dressing rooms and carpeting for the audience seating area.

According to Lamplighters historians, the organization traces its beginnings to 1937, when formation of an amateur stage-acting group was announced in the old publication La Mesa Scout. Those volunteer actors and stage crew became known in June of that year as The La Mesa Little Theatre. Other names billed on the marquee have included La Mesa Community Theatre, Town and Country Players, Foothill Players, La Mesa On The Isle, and La Mesa Players. Lamplighters became part of the theater company’s title in 1972. A major historical milestone was the company’s incorporation as The Lamplighters Community Theatre on Nov. 1, 1976.

Lamplighters Community Theatre is in it for the long run, serving La Mesa and the surrounding areas with community-oriented theater experiences, and offering quality live entertainment for both audience members and theater company volunteers. The group also intends to provide a training facility for those interested in learning the theater trade, to assist all participants with opportunities to pursue their personal theatrical goals, to create a financially stable business environment for the theater, to increase the numbers in the audience and among volunteers, to boost the overall theater environment in San Diego County, and “to have fun and enjoy the experience.”

Lamplighters Community Theatre can be contacted by calling Barbara Eisele at (619) 448-1926 or the box office at (619) 286-3685. The next show, which opens on Feb. 6, is “Murder at the Howard Johnson’s” by Ron Clark and Sam Bobrick, with weekend performances on Friday and Saturday nights at 8 p.m., and Sunday afternoons at 2 p.m.  The theater is located at 5915 Severin Drive. More information is available at www.lamplighterslamesa.com.

May you always have fair winds and following seas