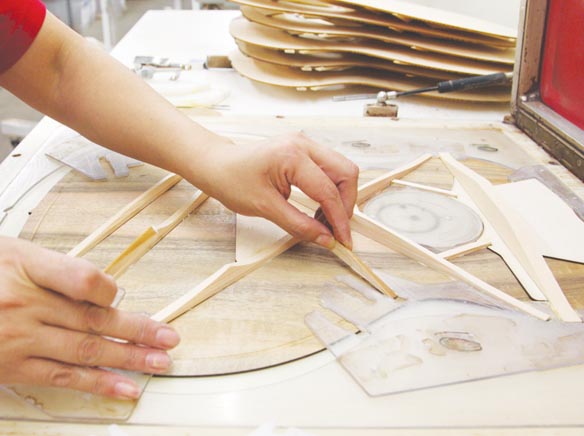 A homegrown collective conscience of Taylor Guitars is in the music you listen to everyday. Trace that music back far enough, and it began with good ideas, hope, and some risk. Just like a successful company that adds different parts along the way. Taylor Guitars hits the right chords day after day, as a whole, and with the hum of its parts.

A homegrown collective conscience of Taylor Guitars is in the music you listen to everyday. Trace that music back far enough, and it began with good ideas, hope, and some risk. Just like a successful company that adds different parts along the way. Taylor Guitars hits the right chords day after day, as a whole, and with the hum of its parts.

Which kind of makes East County the garage band of the entire world.
Wood, machinery, tools, and craftsmanship combine to make approximately 500 guitars daily on Gillespie Way to be marketed, sold, and eventually, played. Two warehouses in El Cajon comprise the headquarters of Taylor Guitars; the offices, factory floors, and a Taylor Guitars store.

That is one way to view Taylor Guitars, as the sum of its parts. Like there is one way to hear a guitar, by the sounds it makes. For almost four decades, Taylor Guitars has produced superior instruments while instituting visionary business practices that sustain resources, foster creativity in school children, and contribute to local economies. Right here in East County, the whole of Taylor Guitars is a fine-tuned symphony that sends good vibrations down the street and across the world.

Taylor Guitars are played by a variety of today’s award winning musicians. Jason Mraz, a local favorite, strums a Signature Model guitar inlaid with his personal mantra, “Be Love.” An Artist Signature model is a guitar designed in conjunction with an artist featuring their signature touches.

“We start early and end late,” says Chalise Zolezzi, Taylor Guitars, communications manager. With their production rate, it is a must, she said. One guitar takes eight to twelve days to make, and they are made in East County as well as Tecate, Mexico. Management from Taylor, to maintain standards, travels to the Tecate location several times each week. Though all “innovation and design happen on site,” in East County, Taylor has expanded operations that includes an ebony mill in West Africa as well as a distribution warehouse in the

Expansion has fortified the positive impact of Taylor Guitars, particularly, with natural resources. In Honduras, Taylor Guitars works with Greenwood Global in a “social forestry model that, along with Taylor’s wood procurement experts, allows us to only take the tree we need, minimizing waste, while supporting the local economy,” Zolezzi said.

Last year in Cameroon, Taylor assumed ownership of an ebony mill named Crelicam, with environmental and civic responsibility in mind. “We took this step as a way to protect the future of ebony, a wood commonly used on guitar fret boards and bridges, and to bring opportunity to the people of Cameroon,” Zolezzi said.

Long-term employees of Taylor’s Crelicam mill are rewarded for years of service to Taylor Guitars according to their local customs. Daily lunch is served to employees. Taylor Guitars’ Cameroon operation also sponsors soccer teams and fosters schools nearby.

Taylor Guitar’s involvement with local schools started in East County years ago.
“In 2000, Taylor Guitars and the San Diego Music Foundation formed the Taylor Guitars for Schools program to get guitars into the hands of elementary aged students. Since then, the Foundation donated over 2,000 guitars to local schools and by all estimates benefitted over 30,000 students,” said Zolezzi.

For all of the accolades and good works, the personality of Taylor Guitars is remarkably unassuming and easy going. Founders Kurt Listug and Bob Taylor are there most days among their focused employees, making guitars for famous and anonymous people, but it is all the same.

Tours of Taylor Guitars to the public are offered Monday through Friday at 1:00 p.m., holidays excluded. School groups need to book in advance.