It is 45 degrees outside when volunteers gather one recent morning at Santee City Hall for the 2020 Point In Time Home­less Count. The data they collect that day will be passed along to the Department of Housing and Urban Development, ostensibly to assist with local homeless outreach program support and funding determination.

There is a table with snacks waiting for volunteers: a bag of Mandarin oranges, organic snack bars, water and cookies. By 3:30 a.m. few participants are eating but one woman helps herself to a bottle of water and wishes aloud for hot coffee in­stead. Another pulls at the bulky fabric on her ankle and says she wore two pairs of pants to stay warm.

Left unsaid is that there are people sleeping outside through­out the city, unsheltered from the cold night and certainly not waking up to a table laden with fresh fruit or baked goods.

The 16 participants stand in groups, some chatting and get­ting to know each other while others familiarize themselves with an phone app being used to track information. After a de­cade of gathering data by hand, the count is going hi-tech. Ac­cording to San Diego Regional Task Force on the Homeless Di­rector of Operations Kat Durant, the app will cut down on paper and is a better way to collect data.

Coordinated Entry Systems Specialist Victoria Dumon works with San Diego’s Regional Task Force on the Homeless and is fa­cilitating the annual count for this Santee site.

She checks to make sure ev­eryone has found a partner or group, then distributes new socks donated by Bombas Appar­el and $5 gift cards purchased from McDonalds. Volunteers are reminded that the socks and gift cards are strictly for those homeless individuals who agree to answer survey questions for the count.

John Campbell, 63, stands about a foot taller than the oth­er volunteers and appears pre­pared to go out into the night with a warm hat, a winter coat and a bright flashlight but betrays his nervousness when he asks in a hesitant voice if anyone else is here for the first time. Af­ter telling the other volunteers he wants to partner with someone who has done this before he is parte­nered with county of San Diego employees Gene­vieve Woods and Melissa Diaz, both housing spe­cialists who are familiar with the point in time count.

Each group of volun­teers is given a map of the area they will be covering. The areas correspond with the most recent United States cen­sus tracts. According to the census bureau, tracts are small, relatively per­manent statistical subdi­visions of a county; each one averages about 4,000 inhabitants.

The volunteers at this particular deployment site will be spread out over a dozen established census tracts.

Dumon said that al­though volunteers are unlikely to encounter any homeless on some routes, HUD still requires that every census tract is ac­counted for.

Woods takes a map of the streets they will be covering and pulls out a pink highlighter to keep track of the route.

Campbell’s group will be surveying a section that is encompassed by Mission Gorge Road, Graves Avenue, Prospect Avenue and Cuyamaca Street. The area is cat­egorized as priority two of five, denoting that the group is somewhat likely but not guaranteed to en­counter any homeless as they cover their territory.

The group takes off in Camp­bell’s car toward their section of Santee, an area of about four square miles.

The route that Campbell takes through the tract is wind­ing, with many stops and twists along each street; he frequently backs out of private driveways and turns into dead ends, using his headlights to scan for sleep­ing bodies in the early morning darkness. Every few blocks, he stops the car and the group gets out to take a closer look through foliage for possible homeless peo­ple. The car weaves about awk­wardly as Woods marks off each covered inch of the route.

“It does sort of look like we’re drunk driving. People say the police have stopped them before and they just explain what they’re doing,” Woods says.

Almost two hours have passed before the group encounters the first homeless person. He is scavenging bottles that can be recycled from a fast food restau­rant’s trash dumpster.

Woods rolls down her window and calls out to the man, who looks over with a nervous glance as the car rolls up to him. She calls out to him again, emphati­cally:

“We just want to ask you a few questions.”

Diaz, a petite, soft-spoken 27-year old, gets out of the car and gently asks to speak with him. The man is tall and twitchy and appears young: fluorescent light spilling out from the fast-food joint reflects off his tanned but unlined skin and he banters like a college kid when he tells Diaz in a joking tone: “Yeah, I’m kind of a big deal”.

He quickly mounts a waiting bicycle with an attached trailer full of bottles and cans but Diaz insists that she is just gather­ing information to help him. He hesitates, then confirms he is homeless for Diaz so she can add his information to the track­ing app. With a quick “God bless you guys,” he accepts the clean socks and gift card he is offered and rides off.

As the group moves through the darkness, Woods comments that some areas are inaccessible, even on foot.

“I think some people might be behind all these industrial ar­eas, the problem is we can’t get behind all those fences by the businesses,” Campbell said.

The car is warm and serves the group as they efficiently cov­er the route, with Woods marking off streets on the paper map as she navigates to cut down on unnecessary backtracking. It becomes apparent the public streets they are driving do not necessarily coincide with the back parking lots and secluded pathways which run between warehouses and private drives.

They roll past a series of dumpsters, one with an indis­cernible pile stashed alongside one bin.

“Check that pile by the dump­ster, I’m not sure if its trash or not,” Woods said.

The pile turns out to be gar­bage under a blue tarp so they move on. The group agrees that it is hard to spot people in the darkness. They might not want to be seen, or possibly risk losing their shelter.

“You have to look for them be­cause they’re almost invisible,” Woods said.

Having counted in San Diego in years past, Diaz points out that counting looks different in unincorporated areas of the county than downtown streets. She says that walking downtown inevitably leads to talks with homeless, often with dogs.

Over the course of the four-hour long stint, she trades in­formation with friends who are participating in the count across the county. One says Imperial Beach seems more empty than usual.

Woods adds that a Hepatitis outbreak in 2017 might have al­tered homeless statistics slightly as city officials attempted to manage the spread of disease and encouraged homeless popu­lations to move east of the city.

Everyone in the group agrees they expected to encounter a larger homeless population and have no documented evidence to support why the count seems low but spontaneously trade ideas on possible contrib­uting factors: per­haps they drew a map with a census tract that does not typically include a lot of homeless in­dividuals; perhaps they volunteered for Santee and ex­pected a different outcome based on the location of the trolley station; perhaps their side of Mission Gorge has fewer bus stops in which to take shel­ter than the tract just across the street.

They all mention wanting to be sure and account for everyone lest they leave someone out and inadvertently skew the statistics by missing an en­campment.

Communications Officer Sarah Swee­ney later clarified in an email that San Diego county’s inte­grative services worked with the Sheriff’s department this year and utilized drones the day be­fore the count to identify areas of concentrated homeless popu­lations that might not be eas­ily seen. Regional Task Force on the Homeless staff then fol­lowed up with people identified through the drones as living in those areas.

As they cover the route, the group compares experiences with homeless outreach. Campbell has volunteer experience with the Interfaith Shelter Net­work and explains he used to volunteer with overnight shel­ters.

“It sounds terrible but some people have the system wired. It can be hard when you have to tell people they can’t bring weap­ons in, sometimes we have to get the police involved. It’s kind of like the tip of the sword,” Camp­bell said.

The group is moving quickly in an effort to finish their tract and they grow more efficient as the morning hours creep by, hopping out of the car with each stop for a walk around the area. Camp­bell begins to fall into a pattern, taking off while volunteers are still clicking their seat belts back in place for the short drive to the next stop.

Daylight is just beginning to pop through the dark sky when the group pulls into a parking lot with a thick barricade of bushes. A tarp is strung from the bushes, low-slung and hid­den from view of the street. Neatly lined jars are placed on the curb being used as a make­shift night stand, evenly spaced with practical items like sil­verware and a comb at hand. There is bedding laid in a semi-permanent campsite with cov­ers thrown open like someone had quickly roused themselves out into the day. A colorful stat­ue is standing watch over the little camp but nobody is there to be counted.

A volunteer ticks off a box on the app that indicates they saw an encampment with no interac­tion, and the group drives on.

They return to the rally point at 7:30, route complete but only the single homeless man and the one discovered encampment noted.

There is true daylight when they go their separate ways, 364 days to go before the next count. 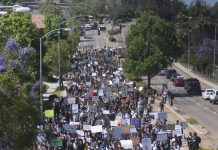 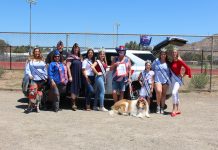 Old West reappears in El Cajon for a night of Lions...