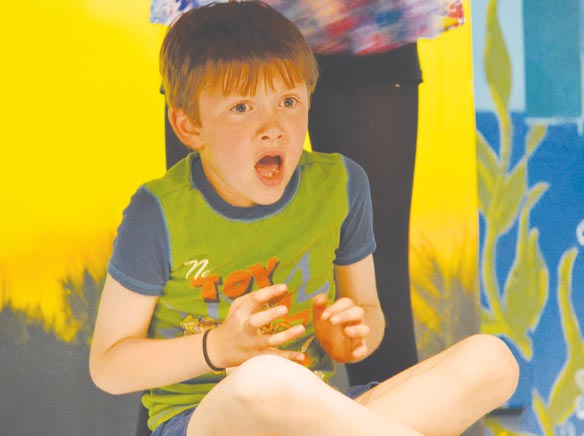 “The Little Mermaid” is swimming its way to Spring Valley’s ENCORE! Theater, still full of the magic, music and fantasy that enchanted both young and old for years. This enchanting musical is full of fan favorites, Ariel the mermaid, Sebastian the crab and the wicked Ursula, all with the help of some of East County’s talented youth.

“The Little Mermaid” is swimming its way to Spring Valley’s ENCORE! Theater, still full of the magic, music and fantasy that enchanted both young and old for years. This enchanting musical is full of fan favorites, Ariel the mermaid, Sebastian the crab and the wicked Ursula, all with the help of some of East County’s talented youth.

“It is a wonderful little youth theatre here,” said Mullen. “Not only do the kids come here and get experience with acting, becoming a family, having lots of great friends and giving them something positive to do after school, but they tend to grow up with it.”

Many of the kids branch off to learn how to run the lights, the music, tech the show, bringing out the props and everything needed to produce a show, she said. It is not just an after school activity, and Mullen said here, they grow their passion for the arts.

“They grow and get the opportunity to learn the entire aspect of theatre,” she said.
Mullen said she believes the program is beneficial for the kids because with cutbacks from schools, they have somewhere to come and positive to look forward to.

“This is something that takes them from being home alone, being too much into the technology world and the not doing much of anything,” said Mullen. “They look forward to it, they grow together, it gives them a lot of happiness and they feel good about being a part of something. I think it does a lot for those who don’t have much to look forward to, don’t know where they fit in and it is a positive thing all around.”

Aquata, played by Meagan Newell, 15, said the play is energetic, much like the movie, with all the songs that the audience will love to engage in. In the program for five years, this is her eleventh show.
“It’s a lot of fun for me to do and watch,” said Newell. “I’m definitely more confident, I used to be really shy and now I am not.”

Norman Niessner’s six-year-old daughter Sharlie plays one of the clam dancers and this is her first show. He said it is a hectic with four daughters, but Sharlie seems to enjoy everyone.

“For her, she loves it,” he said. “I think a lot of it is being around kids her age, she’s not trapped at school or home where she only has a two-year old to play with.”

Her mother, Shannan Niessner said she drove by the theatre and decided her daughter needed something to do and her daughter showed great interest. She said most extracurricular activities want hundreds up front, you have no idea of how your child is going to do and usually the commitment of the child versus the commitment of the money plays out badly.

“They are really good here, they work with me on finances,” she said. “So we agreed that she would at least do one show and then she could decide whether she wanted to continue. So far, she loves it and she has a lot of fun.”
Ariel, played by Chelsea Mullen is a senior at Steele Canyon High School began the program in third grade.

“It’s done so much for me, I can’t even explain it,” she said. “It brought me out of my shell as a person, I’ve established life-long relationships here and it has allowed me to grow and discover my passions in the arts and helped me realize what I want to do in life.”

Michelle Mullen said the Young Actors’ Theatre t is a nonprofit organization, and runs five or six plays a year. It recently had a Casino Night fundraiser and continuously tries to raise money for the theatre from show to show.
“We go out into the community, do the Del Mar Fair, and try to get the word out as much as we can,” she said. “We participate in after school programs and that is how many of our student come into here. Some of them come in here and go on to have a successful business career in acting and others just love being here being a part of the family and the togetherness.”