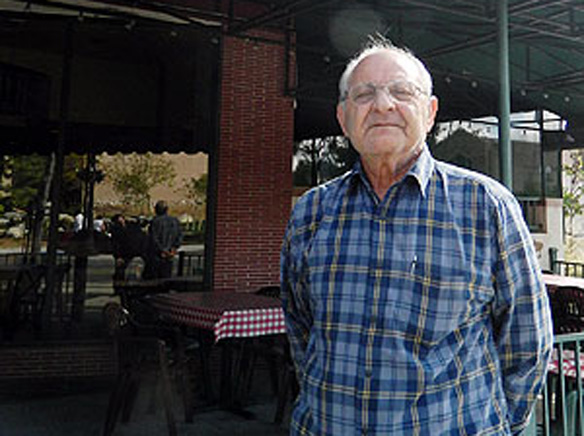 Domenico Donato first came to America from Italy over 50 years ago and has never desired to to return to the Old Country.
Until now, that is.

Donato, owner of Mangia Bene, recently received a notice from the El Cajon Community Development department in regard to what businesses can and cannot do with advertising signs on or in front of their property.

Domenico Donato first came to America from Italy over 50 years ago and has never desired to to return to the Old Country.
Until now, that is.

Donato, owner of Mangia Bene, recently received a notice from the El Cajon Community Development department in regard to what businesses can and cannot do with advertising signs on or in front of their property.

Basically, in an attempt to keep the sidewalks in the Downtown District (Main Street, between Claydelle and Magnolia) from becoming the eyesore that some street businesses have become, the ordinance outlaws most banner and sandwich board advertising.

And, only on special event days (Valentine’s, Presidents, Mother’s Day, Fourth of July, Labor Day and the “Winter Holidays”) is the measure temporarily suspended.

From the notice: “The city of El Cajon has a comprehensive sign ordinance that details the type, size, location and number of signs local businesses may display.

“This ordinance is intended to serve the interests of community aesthetics, vehicular and pedestrian safety, to protect and preserve the property values, to improve the visual environment of the city to promote commerce, investment, tourism and visitation. and the overall quality of life for persons living in, doing business or visiting the city of El Cajon.”

Therein lies the rub, however, as a measure designed to curb the clutter of the Village on La Mesa Avenue, the new rules have in effect put a damper on El Cajon merchants.

“Someone delivered this notice on a Wednesday and told me I had to be in compliance by Friday or I would be charged a fine of $500 per day,,” Donato said. “That was ridiculous. I was shocked.

“At first, I was going to ignore it and tell them to just fine me, I didn’t care. Later, I planned to just close down, sell the restaurant and move to a more business-friendly community.”

Finally, though, Donato decided not to be driven from his town, opting instead to complain to someone at the Community Development Corporation or the city’s planning department.

Of course, the runaround from here was as frustrating as the signage ordinance itself.

This, after going through problems with the city and his restaurant that included street/sidewalk repair, parking lot reduction and the recent one-percent sales tax that many merchants consider a business-killer.

“Some city employees are making hundreds of thousands of dollars a year, while us business people struggle with the recession and now these rules and regulations.

“We didn’t want to put big, ugly signs blocking people’s sidewalk access, just wanted to advertise our meal specials, that’s all,” h e said.
Donato claims he even framed the banners (so they would not flop or blow around in the wind). He said even that gesture was not accepted. The loopholes and hoops they have to jump through have frustrated other local merchants, as well.

“We’re trying to work with people like Jeff Davies (of the new Promenade District) and the CDC, so I think we might get some traction here, but it is pretty slow going,” said Gabriel Marrulo, the owner of the Downtown Cafe and Por Favor, both popular Main Street restaurants.

“A lot of us are getting together to try to make some sensible changes to some of these measures that really only drive business away when we’re trying to bring business back to this town.”

Davies concurred, saying, “This ordinance I’m sure was to keep things neat and uniform, but I believe we can come to an agreement that will please both the city and our merchants.”