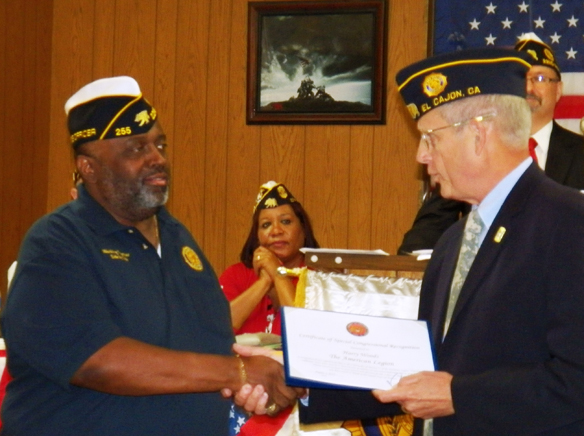 The American Legion, as a veteran’s service organization, operates roughly along the fiscal-year calendar’s timeline, with new officers taking positions that begin formally in July or August. Those retiring from their roles step down at that time, and the outstanding ones who have provided exemplary leadership are acknowledged as they conclude their terms.

The American Legion, as a veteran’s service organization, operates roughly along the fiscal-year calendar’s timeline, with new officers taking positions that begin formally in July or August. Those retiring from their roles step down at that time, and the outstanding ones who have provided exemplary leadership are acknowledged as they conclude their terms.

East County veterans accorded such honors to Harry Woods, who served as this past year’s District 22 Commander for The American Legion, with a special award presented by El Cajon Post 303 Legionnaires on behalf of their fellow Post member Congressman Duncan D. Hunter. Post 303’s 2nd Vice Commander Wes Schermann delivered the award to Commander Woods at the District 22 general meeting held in Escondido on Aug. 3. The inscription on the Certificate of Special Congressional Recognition reads, “In recognition of your superb leadership as the Commander of District 22 of the American Legion – Department of California, 2013-2014. Your U.S. Navy service, in addition to your many leadership roles in your Post and District are a testament to your concern and advocacy for the welfare of those veterans who have served on behalf of the United States of America.”

“Harry is a tireless defender of veterans and his leadership has been a great asset to the community. He set a great example and I’m proud to be part of an organization that benefited from his steady hand and advocacy,” said Hunter.

Woods concurrently served as 2013 defensive line coach for Horizon Christian Academy’s football team, coaching young men, and as American Legion District 22 Commander, overseeing Legionnaires throughout San Diego County. The watchwords Woods chose for his yearlong term of office are, “Focus on the mission. Look for the gold. Emphasize the positive.”

Woods holds a simple, direct, yet powerful view on successful leadership in volunteer organizations. He draws a clear line between managers and leaders.

“You manage inventory,” Woods said. “But you lead people.”

He rejects authoritarianism and always-by-the-book rigidity, noting the necessity of transitioning from a military mindset. He is emphatic that leaders should do the right thing, which is not always written in the rulebook, and that leaders should lead by being out in front, stepping out to move others toward accomplishing the organization’s mission.

Woods comes from a family devoted to academic achievement, sports accomplishment, and military service. Young Harry was named after his Uncle Harry, 92, a World War II veteran who later worked as vice president of the physical plant at Ohio’s Central State University, and a lifelong mentor. The elder Harry landed at Utah Beach, one of the allied landing points for the liberation of Europe from Axis conquest. Harry’s Uncle Jimmy retired from the military as an Air Force Lieutenant Colonel, and was a Tuskegee Airman.

Woods attended the Naval Academy Prep School, and then graduated in 1978 from the Naval Academy. His career as a Navy officer encompassed a variety of assignments, including service aboard the USS Mobile, where he was awarded a Surface Warfare Officer Pin, and the USS Dixon, where he earned the Engineering Officer of the Watch (EOOW) designation. Woods spent 2.5 years on shore duty at the Naval Training Center as an organizational effectiveness consultant. His last assignment was as an engineering instructor for international officers at the naval amphibious school in Coronado. During his career, he also found time to earn a master’s degree in business administration. He separated from the Navy in 1988 as a Lieutenant. Woods later spent more than 20 years with the San Diego Fire Department, retiring as a fire prevention supervisor/firefighter in March 2011. Woods has one son, also a Naval Academy graduate, who is currently serving aboard the USS Dewey.

Woods has been active in San Diego County volunteer organizations for over 12 years, including the Veterans of Foreign Wars, Disabled American Veterans, AMVETS, Fleet Reserve, the Eagles and the Elks.

Within American Legion positions, Woods notes, “I can serve veterans and help out here.”

Santee’s Santa at the Lakes delights children of all ages