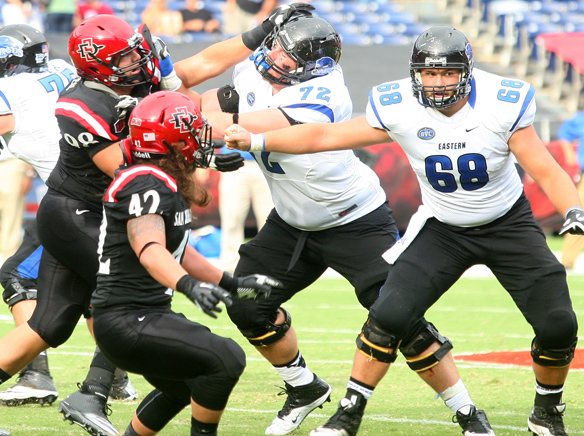 Gates are set to open at noon, and admission is free. There will be food trucks and inflatable activities for kids, as well as appearances from other Aztec athletic teams, the band and the dance team.

Gates are set to open at noon, and admission is free. There will be food trucks and inflatable activities for kids, as well as appearances from other Aztec athletic teams, the band and the dance team.

The apparel sale will run from noon to 1:30 p.m. and will include Nike Aztec football jerseys, Dri-FIT gear, T-shirts and jackets among other items.

There will be an apparel pre-sale for Aztec Club members beginning at 11:30 a.m. through Gate E, while the general public sale begins at noon through Gate D.

Those interested in purchasing Aztec apparel are encouraged to arrive early to have their choice of a larger selection. Aztec Club members can bring a photo ID and present it at Gate E for admission to the pre-sale from 11:30 a.m. to noon PT. The ID must match the name on the donor’s account.

The Fan Fest scrimmage is scheduled for 1:30 p.m., leading up to the meet-the team autograph session beginning at 3 p.m. This will be fans’ first glimpse of the SDSU football team since the Aztecs defeated Buffalo, 49-24, in the Famous Idaho Potato Bowl on Dec. 21.

The event also serves as the first opportunity for season ticket holders to pick up their replica Kabeer Gbaja-Biamila jersey with their vouchers. Fans will also be able to purchase season tickets and view available seats during the event.

Season tickets, a mini-plan and all individual home football game tickets are currently on sale through at GoAztecs.com, the SDSU athletic ticket office at (619) 283-7378 or in person at Qualcomm Stadium Window E (Monday through Friday from 9 a.m. to 5 p.m.).

The Aztecs kick off the 2014 season on Aug. 30 at 4 p.m. when they welcome Northern Arizona University to Qualcomm Stadium.

SDSU returns 12 starters and 35 letter-winners from a squad that posted an 8-5 overall record and a 6-2 conference mark in 2013. With its bowl game appearance, the Aztecs became one of only 29 teams in the nation, and one of just five non-BCS schools, to compete in a bowl game in four consecutive seasons.

San Diego State is picked to finish second in the West Division of the Mountain West in the 2014 preseason poll, while senior defensive back J.J. Whittaker and sophomore runningback Donnel Pumphrey have both named preseason all-MW selections.

The Aztecs garnered 172 points, just two shy of two-time defending champion Fresno State’s 174, in the annual media poll. Both the Aztecs and the Bulldogs picked up 15 first-place votes apiece, while Nevada had the other three and had 130 points for third in the West Division. UNLV (95), San Jose State (87) and Hawaii (35) rounded out the West Division poll.

Pumphrey, who earlier this summer was named to the Doak Walker Award Watch List (top running back), is the lone underclassmen on the preseason all-MW team (offense, defense or special teams) and the first SDSU sophomore named to the team since back-to-back 1,500-yard rusher Ronnie Hillman in 2011.

As a true freshman in 2013, Pumphrey rushed for 752 yards and eight rushing touchdowns on 125 carries (6.0 avg.), while adding 22 catches for 234 yards (10.6 average) and another two scores. He was one of just two freshmen in the country (and the only freshman in program history) and 19 players overall to record at least 750 rushing yards and 230 receiving yards.

Whittaker, named to the Jim Thorpe Award Watch List (best defensive back), is one of seven seniors on the defensive side of the ball on the preseason all-conference team.