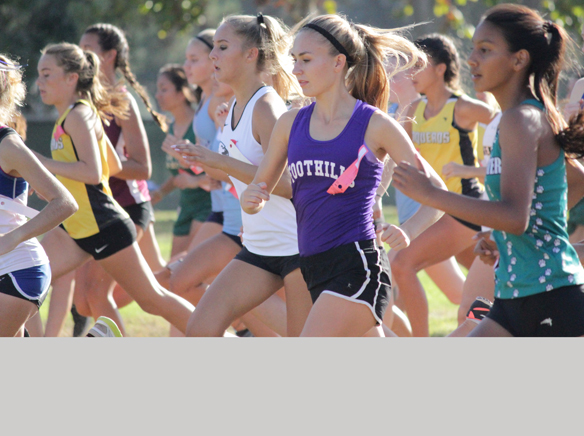 And on Sept. 23, they ran together in the South Bay Invitational at Rohr Park in Chula Vista, California.

Dunning comes from a large program at Grossmont with 37 highly motivated girls. Butrovich runs for a small school in El Cajon; she is their only varsity competitor.

And on Sept. 23, they ran together in the South Bay Invitational at Rohr Park in Chula Vista, California.

Dunning comes from a large program at Grossmont with 37 highly motivated girls. Butrovich runs for a small school in El Cajon; she is their only varsity competitor.

“We have ten schools in our league but they’re all small like us,” said Butrovich’s mom, Kris, who is also the team’s head coach. “There may be fifty runners in a race (in the Pacific League) as opposed to today where there were 300 runners.”

Coach Butrovich, who is on her second year in that position with Foothills, said the team is very tight-knit. Small numbers make it easier to get to know teammates, easier to find the areas that need work, easier to individualize coaching, she said.

But big meets like this are intimidating, so to prepare, Coach Butrovich said they go back to the basics.

“I try to get them to think of themselves as runners,” she said. “It’s a lot of mental work. You have to want to get better. You have to want to run. It doesn’t take a great athlete to get out there and run, like you see today. Some of these kids are walking and there are still people cheering them on. You just have to have the desire to try.”

A minute and twelve seconds before Butrovich crossed the finish line, Dunning swept across the green to capture tenth place, turning out Grossmont’s best time for the race. With the timer blinking 16:38 in large red numbers as she crossed the white line chalked in the grass, Dunning led what would turn out to be an emotional finish for the Grossmont Foothillers.

In the next minute, four more Foothillers would cross the finish line to secure second place for the team, a goal they have been striving to meet for years. They placed just behind Point Loma and, with 136 points, were one point ahead of Francis Parker. Santana and El Capitan took fourth and fifth.

Lady Foothillers Coach Ross Bartell said Grossmont has been trying to medal at the South Bay Invitational for years. They have always been contenders, he said, but they have never quite done it.

“I have a group of seniors on my team right now who have been here for years, who have a lot invested in the program,” he said. “It was a big deal to them to push through that door that they’ve been knocking at for years now. They were crying and hugging when they found out.”

Both JV and the varsity team took second place, making it a big day for the Grossmont girls.

Having coached at Grossmont for 13 years, Bartell said he has seen the program more than double in size.

“It’s building traditions and getting the right group of girls out, who want to work hard and understand that hard work is going to pay off,” he said. “It might take three or four years like it did for these girls, but if you continue to push, it does pay off in the end.”

Many of the Foothillers ran more than 300 miles this summer, said Bartell, but the girls know when to work hard and when to have fun.

“We have a family culture, and I think that’s why they keep coming back,” he said. “We keep them in our program because it’s not just the running, it’s the family.”

Family is another thing Dunning and Butrovich have in common. Though different in size and tradition, the Foothillers of Grossmont and the Knights of Foothill Christian both admit to their affection for the teams that has become their second family.

Foothills Christian sophomore Nathan Christensen said their team, which sent eight runners in total on Friday, is built on trust and support.

He spoke in spurts, pausing for a moment to watch and cheer on Butrovich as she passed the Knight’s canopy, heading into the last mile of her race.

“We’re all really connected to each other,” said Christensen once his teammate had passed from sight. “We don’t leave anybody behind.”

Passing grade—high school football season is right around the corner