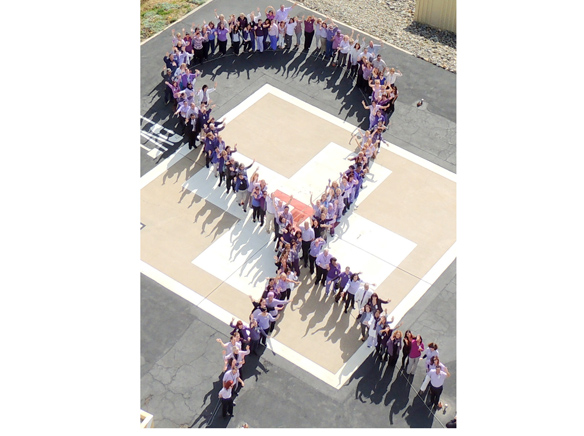 On Thursday, Feb. 2, nearly 150 employees and staff of Sharp Grossmont Hospital gathered on the helipad to commemorate World Cancer Day. With all of them wearing lavender and sporting lavender ribbons, they formed a giant human ribbon in a show of unity against all cancers.

The event was the 2nd annual such observance of the hospital since Scott Evans became the hospital’s CEO.

On Thursday, Feb. 2, nearly 150 employees and staff of Sharp Grossmont Hospital gathered on the helipad to commemorate World Cancer Day. With all of them wearing lavender and sporting lavender ribbons, they formed a giant human ribbon in a show of unity against all cancers.

The event was the 2nd annual such observance of the hospital since Scott Evans became the hospital’s CEO.

“Most people’s lives have been touched by cancer in some way,” Evans said.

Evans’ son Christopher, just 4 years old at the time, was diagnosed with kidney cancer. Eventually, the cancer spread to his liver and lungs.

“When I heard the news it literally knocked the wind out of me,” Evans said.

There were months during that time when Evans and his family practically lived in the hospital day and night. Yet he also remained hopeful.

Because he is a Doctor of Pharmacy, Evans was able to understand what treatment his son was enduring and what to expect. It did comfort Evans, however, to hear other families of patients who were having similar experiences.

“When cancer affects you or a loved-one, it can be a life-changing experience. You take stock, pause and reflect on what and who is really important in your life,” Evans said.

The ways to prevent cancer from destroying lives are many—and essential. Besides a healthy lifestyle and regular check-ups, cancer screenings are one of the most powerful tolls in the prevention and detection of cancer. In the beginning stages, cancer is treatable, so early detection definitely increases chances of survival.

Prominent cancers for men—amounting for 42% of all newly diagnosed cancers in 2017, according to the American Cancer Society–are prostate, lung and colorectal cancer.

For women, the three most common cancers in 2017 will be breast, lung, and colorectal, which together will account for about half of all cases.

Skin cancer is the most common cancer in the United States. In sun-drenched San Diego, people fall prey easily to melanoma and other types of skin cancer. Jim Staylor, Video Producer for Sharp Healthcare, knows this well.

Several years ago while looking in the mirror after giving himself a haircut, Staylor noticed a large and strange-looking mole on my back. His wife, who is a nurse, insisted that Staylor go to a dermatologist immediately.

“It was a melanoma. Thankfully, we caught it early,” Staylor said.

After surgical removal the lab determined that it had not spread anywhere else in Staylor’s body. He now has regular checkups every four months. In the last several years, he has had another half dozen various skin cancers on his back, face, upper arms and scalp removed. All of the skin cancers had been caught early on.

“I am motivated to stick around for my wife and two sons. I now wear SPF clothing and hats, use sunscreen daily and no longer spend the day at the beach or poolside,” Staylor said.

I was honored to be able to stand with my fellow Sharp employees as part of Sharp Grossmont Hospital’s giant lavender ribbon to help raise awareness for World Cancer Day.

A community-centered hospital, Sharp Grossmont has expanded through the years to meet the communities’ growing needs, Evans explained.

The hospital treats all types of cancer and has invested in advanced cancer-fighting technologies and therapies.

Evans said that Grossmont caregivers were committed to providing families with the compassionate support and care.

“Our staff also has a very high level of commitment to helping to raise awareness about cancer and to honor those individuals who have, or may currently be battling cancer.

That’s what the “Get Your Lavender On” event is all about. If we can raise awareness and remind people that it’s important to get screened for various types of cancer, we can save lives,” Evans said.

For anyone who presently has a family member or friend fighting cancer, Evans said he would advise them to never lose focus on quality of life and never lose hope.

“My son had a rough course for a while. But after a yearlong battle, he has been in remission for eight years. Today, he’s a happy, healthy 12-year old boy and I spend every chance I get with him,” Evans said.