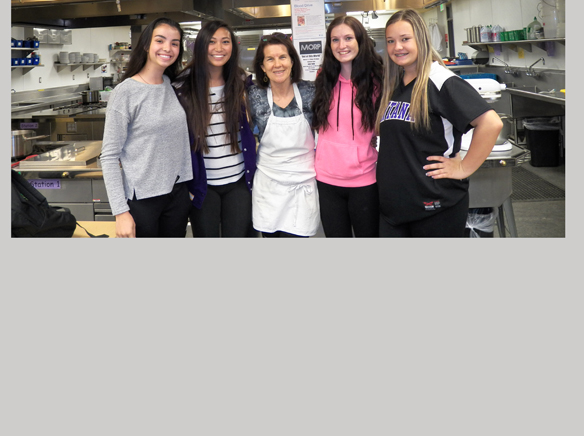 East County knows good, healthy, delicious food. And there is no better time to learn skilled ways around the kitchen than when maturing toward young adulthood. The culinary arts program students at Santana High School in Santee are doing just that, and they are earning well-deserved recognition for how effectively they can apply their cooking lessons in high-pressure simulations of real-life working kitchens.

East County knows good, healthy, delicious food. And there is no better time to learn skilled ways around the kitchen than when maturing toward young adulthood. The culinary arts program students at Santana High School in Santee are doing just that, and they are earning well-deserved recognition for how effectively they can apply their cooking lessons in high-pressure simulations of real-life working kitchens.

Donna Small is a culinary arts instructor, a position she’s held for 10 years. She has taught at Santana High School since 1985, earlier leading courses in child development and mathematics. The culinary arts program became a “pathway” in the local curriculum seven years ago, after being an elective course of study before that.

Small today teaches a total of around 132 students in Santana’s culinary arts program, with a limit of 30 students per class. She has 22 students in her second-year morning class. This year’s youthful Santana “master chefs” were four talented young women, drawn from Small’s morning second-year students.

Small’s relevant background is in nutrition, and she recounted that she found somewhat daunting the challenge of pitting her students against those trained by former career chefs who had transitioned into teaching. Her Santana students have participated in the MasterChef Competition for high schoolers for three years now. The team of competitors rotates annually, as students move toward graduation.

Small said that her first year at the contest was “overwhelming,” and that she felt like a “deer in the headlights.” By year number two, her students took second place. Her team of young chefs did nearly as well for 2016.

A pair of competitors from the four took time out from a recent class on campus, to be interviewed about their competition experiences and their course of study in the culinary arts program at Santana. Nicole Brundage, 17, said that the competition was “fun but nerve-wracking.” She cited the fact that she and her competitor-team classmates had become very good friends during their cooking classes as an asset during the contest.

The lone requirement for the high-schoolers competition was that pork be the “gourmet ingredient” in the prepared recipe. Each contestant team had one hour to complete their chosen recipe. Five-star San Diego chefs served as contest judges, with the competition assessing both “back of kitchen” skills in preparation and “plating” in presentation.

How did Santana’s foursome select their competition recipe? Brundage noted that her class had made pot-stickers one day and believed their creation would stand up well against fancier pork dishes. “We tasted the recipe a lot, to change it up,” Brundage said. She confided that the group had planned to experiment and practice for two weeks leading to the MasterChef Competition, but muffed the contest date and ended up practicing the recipe for three weeks beforehand. The extra work seems to have paid off.

Small said that her group had their best class performance in making the recipe on Monday, a day before the competition, and then knocked it “out of the park,” with their best preparation ever on the contest day. Cooking teachers were barred from the kitchen areas as their students vied in the contest.

Brooke Shibley, another from Small’s Santana culinary student team, said that she had considered the culinary arts program good for possibly landing a “side job,” but that once she had entered the program she found it to be “really important.” She now volunteers to make meals at home for her family. Shibley further explained that the culinary arts courses have taught her how to work well with people, and that she has made close friends in the program. She estimated that about half her classmates would find jobs in the food industry. She advised younger students, “If you can get in this program, take it.”

Shibley echoed her friend Brundage, saying the competition was “fun.” They both expressed pride in their chef team having been the closest to “from scratch” in their food making. They handmade their dough on site, chopped all their vegetables, made the filling and sauce. Most of the other teams brought pre-made ingredients to the competition kitchen stations. The formal title of their competition entry was “Chinese Pork Dumplings in Kecap Manis Chili Sauce, with a side serving of shitake mushrooms, broccoli and bell peppers.”

The two also described the back-kitchen interactions with judges as interesting but challenging. “We had to wash up and re-glove about 15 times,” Brundage said.

Shibley plans to pursue a career as a nurse. Brundage is interested in working professionally with special needs children. Both are intent on improving their skills in cooking.

Small’s classroom space is new this year. She and her students held classes in the school science building for a time, while their new instructional facilities were being built, moving into the new room in February 2015. The classroom has six stainless steel workstations for recipe preparation and cooking. Classes on Mondays through Wednesdays are for ingredient preparation, and Thursdays are for making the week’s meal and enjoying the dining experience in class.