The Little League World Series is back on in South Williamsport, Pa., and the first salvo has been fired for teams taking the long qualification path to the Keystone State.

This year’s Little League World Series tournament is scheduled Aug. 19-29 for 16 United States-based teams. There will not be an international field this year — the first time since 1975.

Before domestic teams can get there, however, they will have to successfully navigate elimination play at the district, section, divisional and regional levels.

The journey starts at the district level. For East County, that includes divisional champions from District 66 and District 41.

“San Diego Southeastern was the only league in the district that did not charter after the reopening of youth sports,” District 66 administrator Roland Slade said. “They plan to come back next season.”

Slade said though the season was shortened, the district was still able to get in nearly the regular complement of a normal 20-game season for each team in each league.

Each district has its own qualification process to determine its all-star champion. Teams may participate in round-robin pool play while also participating in double-elimination bracket play.

“This year’s all-star tournament play has been top notch,” Slade said. “I can see the influence of the Padres, specifically Fernando Tatis Jr. and Manny Machado. There is an added level of enthusiasm. The stutter step on a home run trot is obvious.”

The newly crowned District 66 champions advance to the Section 7 tournament against champions from District 41, District 42 and District 22 that will take place July 17-21 at District 42 Imperial Beach Little League.

Valley de Oro defeated Spring Valley by scores of 3-2 on July 3 and 5-1 on July 5 to capture the teams’ best-of-three 11U division championship series.

Spring Valley suffered a 4-0 loss to Encanto on July 8 but finished the tournament strong with three consecutive wins.

Spring Valley defeated Lemon Grove, 10-0, on July 9, then swept Encanto in a two-game double elimination championship series, winning 3-2 on July 10 and 4-2 on July 11.

The Junior Division (14U) championship series included a best-of-three series between Spring Valley and Encanto. Spring Valley swept two games to claim the division title by scores of 15-13 on July 8 and 21-2 on July 10.

Lemon Grove swept Spring Valley by scores of 11-2 on June 24 and 9-3 on June 26 to claim this year’s district Senior Division (16U) championship.

The District 66 Intermediate Division (50/70) champion (13U) was determined through a best-of-three series between Lemon Grove and Valley De Oro.

Valley De Oro captured the series two games to one as the teams battled through a decisive third game.

Rancho de Oro opened tourney play with a 10-2 win over Lakeside American on July 6 after Lakeside National had defeated Rios Canyon by a score of 22-2 on July 5.

Fletcher Hills shut out Alpine American, 10-0, in the loser’s bracket final on July 9 to gain a berth in the July 10 championship game.

Rancho de Oro completed its championship run to this year’s division title with an 18-1 win over Fletcher Hills to advance to sectional play.

Two teams participated in the 11U all-star best-of-three championship series at Rancho de Oro Little League. Rancho de Oro swept the series against Fletcher Hills by scores of 12-3 on July 10 and 10-0 on July 11.

Fletcher Hills faced off tourney play July 6 with a 9-6 win over Alpine American, then blanked Rancho de Oro, 12-0, on July 7.

Fletcher Hills continued its winning ways with a 7-2 win over Singing Hills on July 9.

Singing Hills defeated West Hills, 5-4, in an elimination game on July 10 to rematch with Fletcher Hills in the championship game on July 11.

Fletcher Hills made sure there would be no double-elimination game with a 16-2 win to add an exclamation point to district play.

Lemon Grove defeated Santana National, 20-5, in a loser’s bracket game on July 5 to meet Sweetwater Valley on July 6. Lemon Grove returned the favor by defeating the District 42 champion by a score of 7-6.

The teams met in a double-elimination contest on July 7. Lemon Grove won another nail-biter over Sweetwater Valley, 5-4, to capture the section banner.

Rancho de Oro swept through the competition with three commanding victories. The District 41 champions opened the tournament with an 18-1 win over Valley de Oro and swept Southwest by scores of 14-4 on July 2 and 18-1 on July 5 to advance to the Southern California divisional tournament hosted by District 32.

Southwest eliminated Valley de Oro by a score of 24-8 on July 3 in a loser’s bracket contest to gain a rematch against Rancho de Oro.

Prior to all-star tournament play, District 41 crowned its annual Tournament of Champions winners.

District 66 elected not to pursue a Tournament of Champions this year, according to Slade.

“We did not have a TOC this year; instead, we chose to run our regular season an additional two weeks,” he said. “That way all the players would get in nearly 20 games.” 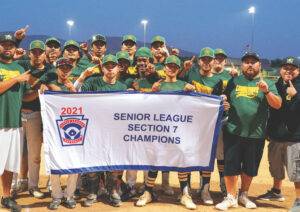 The 16 teams that will compete in this year’s Little League World Series will qualify through eight regional tournaments. The top two teams at each regional will qualify.

The Little League International Board of Directors has approved several items to put into place for this year’s event. These include COVID-19 health safety protocols, limited spectator seating and the cancelation of all regional and world series championship tournaments in teenage-based divisions.

There will be no World Series events in the Junior Division (14U) and Senior Division (16U) age groups and for the Little League Intermediate (50/70) Division.

All these tournaments will finish at the state level.

The board’s plan includes a series of COVID-19 mitigation measures to host these tournaments in a healthy, responsible environment.

“Little League puts the health, well-being, and safety of all players and volunteers first and we are looking forward to hosting the Little League Regional and World Series tournaments with that aim this summer,” said Dr. Daniel Lueders, Commission Chair, Little League International Board of Directors member, and UPMC Sports Medicine Physician and Assistant Professor.

“The commission’s recommendations reflect the most current CDC protocols, as well as direct input from state and local public health authorities. The advice of the leading public health, pediatric medicine, epidemiology, mental health and operations experts on the commission prioritize the health and safety of the players, volunteers, family and fans above all else. We are confident that the implementation of these recommendations by Little League International will permit a safe and successful competition this summer and preserve the spirit and the experiences that make those events so special.”

Spectator seating will be allocated for family members and a limited number of individuals associated with the participating teams.

All players and coaches will undergo COVID-19 testing prior to and upon arrival at their tournament location and will have significantly limited contact from other individuals until negative tests can be confirmed.

Coaches and managers are strongly encouraged to be vaccinated and, should a vaccine be available for age-appropriate players, vaccination would be also recommended for players if appropriate, but not required.

There is a proposal to expand the U.S. division at the Little League World Series to 20 teams, beginning in 2022.

Little League Baseball will celebrate its 75th anniversary next year.

The Little League Softball World Series is scheduled Aug. 11-18 in Greenville, N.C. and will include 10 teams. It will expand to 12 teams next year.