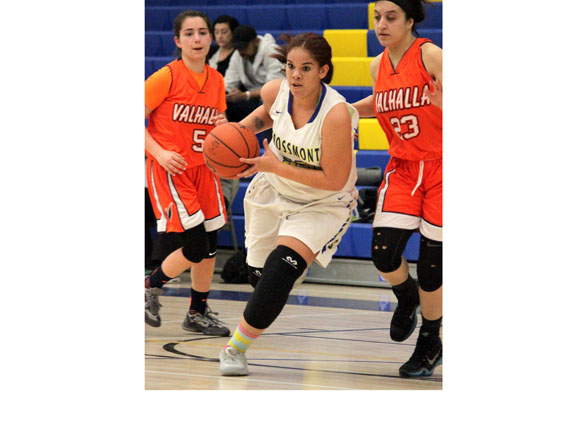 Grossmont’s girls’ basketball team has some big shoes to fill.

In the four years since head coach Grace Campbell has taken over the program, the Lady Foothillers have climbed their way to the top of league standings, culminating in their league win over Steele Canyon last season, a first for the Hillers in nearly a decade.

Now, flush with a new bevy of seniors, the Hillers are struggling with a bit of an identity crisis.

Grossmont’s girls’ basketball team has some big shoes to fill.

In the four years since head coach Grace Campbell has taken over the program, the Lady Foothillers have climbed their way to the top of league standings, culminating in their league win over Steele Canyon last season, a first for the Hillers in nearly a decade.

Now, flush with a new bevy of seniors, the Hillers are struggling with a bit of an identity crisis.

“Every team wants to beat us and the girls aren’t used to having that target on their back, so it’s definitely an adjustment for us,” said Campbell. “Last year, our seniors had that fire and that heart, this year they’re young. We’re trying to bring that passion out of them somehow, someway, but I haven’t figured it out yet.”

Not to say that the vivacious squad has not had its share of victories already this season. They are 16-6 going into conference play, and 1-1 against league opponents.

Their game against Valhalla on Friday, January 27, 2017 offered a tantalizing glimpse of what they could be capable of as a team this year. Valhalla’s players, decked in their orange jerseys, looked like salmon desperately trying to swim against the current of Grossmont’s defense, who continually regained possession just in time to drive the ball back down the court. At the end of the second quarter, Grossmont lead 35-17. The Lady Hillers are aggressive.

But the current ebbed in the second half. Valhalla began to pick up more baskets, keeping the ball in Hiller territory long enough to make the home team feel sufficiently rattled, but not long enough to pull out a win. Grossmont took the W, 54-38.

“We’re definitely a team that likes to push the ball and we’re very aggressive,” said Campbell. “That’s one of our strengths.”

But, Campbell admitted, they are not always aggressive.

“We haven’t been consistent at all,” she said. “We’re playing these teams that we should be beating by 30 or 40 points and we’re barely beating them because we’re not being consistent, and that’s not healthy.”

Grossmont played their first league game against El Capitan and lost to the Vaqueros by two points. Of course, said Campbell, the goal is to beat last year’s record and push farther into playoffs, but the girls have some work to do first.

Campbell said the girls are going to have to find a way to play consistently, and that is just not a coachable trait.

“That’s the girls, inside of them,” she said. “They have to be able to find that fire and passion inside of them and bring it out.”

Junior Hiller Nailah McDuffie said the team is on its way to becoming a tighter group of girls. She said she hopes that will help even out their playing.

“I really think it’s going to be a personal thing,” she said. “I feel like it’s going to start with everyone personally first and then once we start to get our own, we will collectively pull through.”

This is McDuffie’s first year on the varsity team. As a JV transfer, she said there is a very real pressure to live up to the standards of last year’s team.

“It’s definitely something that you have to work for rather than something being handed to you because part of the team now is part of the winning team last year, so they already have some of those spots set for them,” she said. “Their seats are saved.”

McDuffie said the pressure is just pushing her and her teammates to work harder.

“It’s a little frustrating but it’s kind of a motivation because I want to be in that spot so I’m working to get there,” she said.

Grossmont has five more conference games to battle through before the final judgment. They host Monte Vista on Tuesday at 6 p.m. and are scheduled to play El Cajon Valley on Friday.