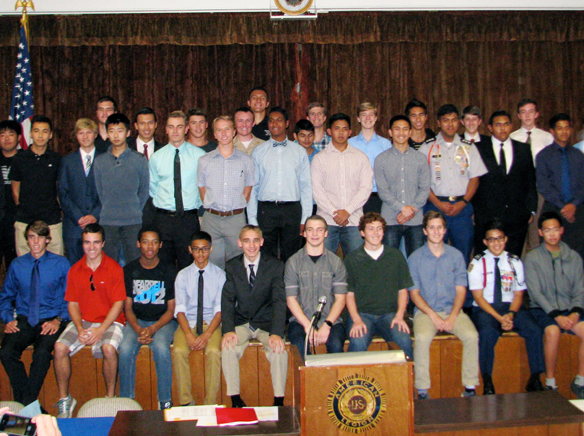 All of these accomplished men, while teenage boys, attended an extended exercise in participatory self-government sponsored by The American Legion, called Boys State.

All of these accomplished men, while teenage boys, attended an extended exercise in participatory self-government sponsored by The American Legion, called Boys State.

On May 16, promising young men from throughout San Diego County gathered in East County at La Mesa’s American Legion Post 282 for the 55th Annual Boys State Orientation Luncheon. These youths were selected as delegates for the 2015 weeklong program, the 78th Session of California Boys State, which will be held at California State University, Sacramento, from June 19-27. A total of 55 delegates tapped from this area are planning to attend.

When the Sacramento session begins, the assembled delegates, who hail from throughout California, are randomly assigned as members of the Whig or Federalist political parties. The delegates write their respective political party platforms. And the Boys Staters set up a functioning government for their polity, including city, county and state levels of government and a full, complete legal system. Athletics, music, art, and other talents are also encouraged and provided opportunities for display.

Past participants in Boys State sessions describe the learn-by-doing experience in American governance as life changing, and as establishing lifelong friendships and bonds. Local attorney Bill Smelko addressed the luncheon gathering to brief attendees on their upcoming week as Boys State delegates. Smelko was a Boys Stater 46 years ago, sponsored by La Mesa Post 282. He has remained with the program since then, serving as a counselor each year. Smelko said he was drawn to the law as his chosen career path by his days at Boys State, where after passing the “bar exam” to become a Boys State lawyer, he won on appeal a case involving another Boys Stater who was accused and convicted of the crimes of “rape and murder of a spider.”

The American Legion is a veterans service organization whose members pledge “to inculcate a sense of individual obligation to the community, state and nation” and “to safeguard and transmit to posterity the principles of justice, freedom and democracy.” The Boys State program fulfills these goals and objectives by developing civic leadership and pride in the young men who participate, deepening interest in and knowledge of state and local government, and increasing dedication to the traditions and beliefs guiding the United States system of government.

The program is eligible for college credits, and scholarships are available from the company Samsung to delegate-applicants who are direct descendants of wartime veterans. The combined luncheon and informational briefing were put on by San Diego County’s District 22 of The American Legion. Costs for participation in the California Boys State program, including registration, transportation and meals amount to $495 per delegate. More information on this program can be found online at www.boysstatecalifornia.org.