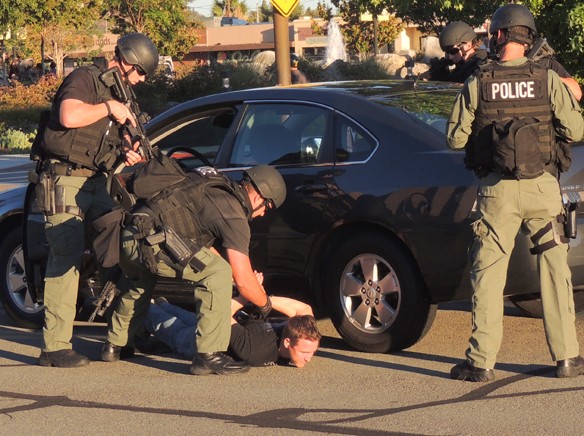 The police were in full force at the El Cajon Police Station last week, complete with a K-9unit and a SWAT team. They were not out for a manhunt, but to bring neighbors and friends together for the 12th annual National Night Out in El Cajon.

Samantha Scheurn, crime prevention specialist with the El Cajon Police Department, said the NNO has come a long way since its first year in 2002.

The police were in full force at the El Cajon Police Station last week, complete with a K-9unit and a SWAT team. They were not out for a manhunt, but to bring neighbors and friends together for the 12th annual National Night Out in El Cajon.

Samantha Scheurn, crime prevention specialist with the El Cajon Police Department, said the NNO has come a long way since its first year in 2002.

Now that El Cajon PD has its own building, the NNO event is held there. Officers and staff fired up the grill for hot dogs. There was Frisbee Golf game and hula-hoops for the children. Families streamed inside the police building to grab up free candy and flyers about community programs.

The biggest benefit that comes out of National Night Out is it gets more people interested in the Neighborhood Watch Program.,” said Chief of Police Jim Redman. “We always tell people they are the eyes and ears of the police.”

Everyone was having fun talking with each other, noshing on a hot dog, playing games, but nobody could hardly wait for the real action. At Scheurn’s announcement that the K-9 demonstration would take place in the parking lot, a crowd quickly gathered.

“He can smell the ‘suit’ on our officer who is going to be our decoy,” Winslow said.

The crowd yelled when Winslow asked if they were all ready for the “big bite.”

Officer Roberto Bonilla lumbered out in his big protective suit. Rico immediately lunged at his arm. Bonilla gently pried loose from the dog’s grip. Next, Rico went for his ankle. Puffs of fiber blew out from the suit as Rico gripped and growled at his prey.

Kali Savage, 6, and her sister Julia, 5, watched the dog with wide eyes. Finally, Rico let go when Winslow instructed him to. Everyone let out a big breath and applauded.

Bonilla showed the welt marks from Rico’s grip. “It just felt like someone squeezing my arm really hard,” he said.

Winslow explained that Rico and the other trained dogs were used in manhunts when the suspect is not willing to give himself up.

“It’s better than having an officer’s life threatened at gunpoint by the suspect,” Wilson said.

Next up was the demonstration by the SWAT Team. “It will be loud,” said Officer Matt Conlon.

Everyone ran to the sidewalk. The SWAT vehicle zoomed with sirens and flashing lights up Rea Avenue. The SWAT team had guns aimed at a parked car on Rea Avenue. A couple of loud booms in mock-gunshot made everyone jump back.  The team of officers leapt off the vehicle and ran with their guns aimed, pulled the passenger out of the car and got her out of the way. Next, they pulled the driver out, getting him face down on the street.

Then they all stood up and waved to the people, who all applauded and cheered.

“The noise and everything really surprised me,” said Lewis Thompson, 10.

Getting the neighbors and kids familiar with their local policemen and their jobs is a major goal of NNO, explained Scheurn.

“This event is a way we can showcase our department,” she said.

The first National Night Out, a project of National Association of Town Watch, took place on Tuesday, August 7, 1984 when 2.5 million Americans took part across 400 communities in 23 states. The event began as an effort to promote involvement in crime prevention activities as well as partnership between the police and communities.

Nowadays, NNO involves over 37.9 million people in 16,124 communities from all fifty states, U.S. Territories and even Canadian cities, according to National Night Out website.

With her daughters Kali and Julia in tow, and pushing her 6-month old in a stroller, Holly Savage felt satisfied with the evening at the El Cajon Police Station.

“It got my kids to interact with police officers. It’s good for them to be comfortable with that,” Savage said.

Five years given to surfer who struck swim coach