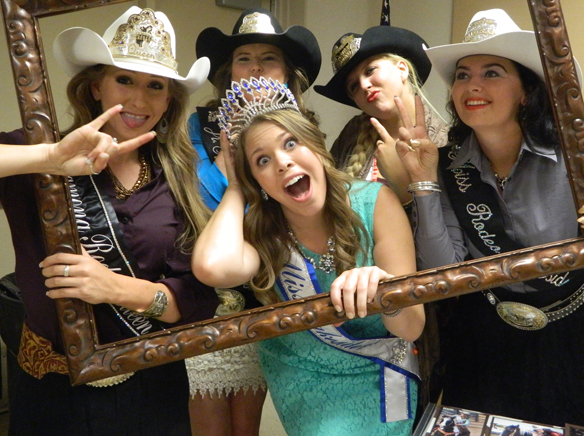 Rodeo fans had a barrel of fun at the TheTaste of Lakeside fundraiser as people came in herds. All to support Miss Rodeo Lakeside 2014 Rachel Owens-Sarno and her desire to move up in competitions to Miss Rodeo California. With live music, a taste of local cuisine and an exhibition barrel race in the arena in tandem, the night was filled with music, fun, laughter and a heaping mound of fun at the Lakeside Rodeo on Aug. 9.

Rodeo fans had a barrel of fun at the TheTaste of Lakeside fundraiser as people came in herds. All to support Miss Rodeo Lakeside 2014 Rachel Owens-Sarno and her desire to move up in competitions to Miss Rodeo California. With live music, a taste of local cuisine and an exhibition barrel race in the arena in tandem, the night was filled with music, fun, laughter and a heaping mound of fun at the Lakeside Rodeo on Aug. 9.

Owens-Sarno is no amateur when it comes to pageant competitions and has her goals set high for a lifetime future in her passion, the rodeo. As a representative of the rodeo for many years, and several titles, Owens-Sarno is reaching towards the next step in her journey. To be crowned Miss Rodeo USA in Lancaster at the RAM California Circuit Finals Rodeo.

Becky McBride, Miss Rodeo Lakeside committee member, said that Ownes-Sarno represents the Lakeside Rodeo and the community of Lakeside so well that it has opened many doors for the entire community.

“We always encourage our girls to reach for their goals, and we don’t want her journey to end here,” said McBride. “We want her to go on with her plans, one of which is to run for Miss Rodeo California. Lakeside has been wonderful in supporting us, but we don’t want to exhaust our resources, so we decided to do a ‘taste’ of many of our local restaurants.”

McBride said the local restaurants saddled-up and said they were proud to donate to the cause. Owens-Sarno went to each one of them, introduced herself and took that time to get them involved. So the committee took A Taste of Lakeside on as an event and McBride said they all had so much fun working with the community.

Owens-Sarno, 22,  began her pageant journey in 2007, but it was not until 2009 that she earned her first title as Miss Ramona Rodeo. In 2011, she brought the crowned hat to her home as Junior Miss Rodeo Lakeside 2011 and again in 2012 as Miss Bulls Only Rodeo. In 2013 she earned Miss Rodeo Poway and said she has loved every moment of her journey.

“So I’ve had a lot of experience here and have had a lot of fun and come to love the people in this community,” she said. “They are so supportive it is just amazing to have them here. It’s part passion and dedication and it does not feel like work. It’s easy because you love what you are doing. It’s like they say, ‘If you love your job, you never work a day in your life.’”

Owens-Sarno said she is not going to school right now, but decided to take this semester off. Her mother is having hip surgery, she is helping take care of the ranch and running for Miss Rodeo California, but plans to get her associate’s at Grossmont College and then decide which school will fulfill her career goals in broadcast journalism with hope of becoming a sideline reporter for the Professional Rodeo Cowboys Association. She said would love to stay in the area for her continuing education.

She said with Miss Rodeo California in conjunction with the Circuit Finals Rodeo this year she will ride in the rodeo as part of the pageant.

“So we have to bring our own horses and I love that idea, he is so fiery he makes me look good,” she said. “The horse I’ll be riding is named Slim, he is actually Miss Rodeo USA’s horse (Miss Rodeo USA 2014 Elisa Swenson) who moved to Oklahoma for her reign this year, so she has let me use him and I am taking care of him this year. He is awesome. He is a quarter horse and a rope horse.”

But there is more than just the rodeo for Owens-Sarno who has plenty of big dreams on her plate and some interesting tidbits about her past.

“Here’s my fun fact,” she said. “When I was younger, my sister and I were in the movie “Titanic.” My sister danced with Leonardo DiCaprio and a lot of people don’t know that about me. I was around four and decided that I never wanted to act. They didn’t give me any lines.”

The fundraiser, filled with silent auction items and raffle giveaways was a great success in helping raise the money to get Owens-Sarno to the next stage of competitions. Representing her by supplying food for the event were some of East County’s best including: Los Rancheritos, La Palapa, Café 67, Boll Weevil, Marechiaro’s, BNS Brewery, Filippi’s Pizza Grotto, Eastbound Bar and Grill and the Bucking Delorian. Playing all evening was the band the Fry Katz that rocked the house with boot-scooting music to classic rock-n-roll classics.

McBride said they are looking for young girls to participate in next year’s Miss Rodeo Lakeside. Orientation is in November and the process begins after the New Year. She said it is important to get the young girls involved and the work, camaraderie and experience that they will gain is an experience that will change their lives and get them actively involved in the community. She said, like Owens-Sarno, who she has known since she was 16 and watched her grow tremendously as a young woman, professional competitor and community representative. She said young women getting involved with the Miss Rodeo Lakeside pageant has nothing but positive gains for the young women that decide to take on this huge responsibility.