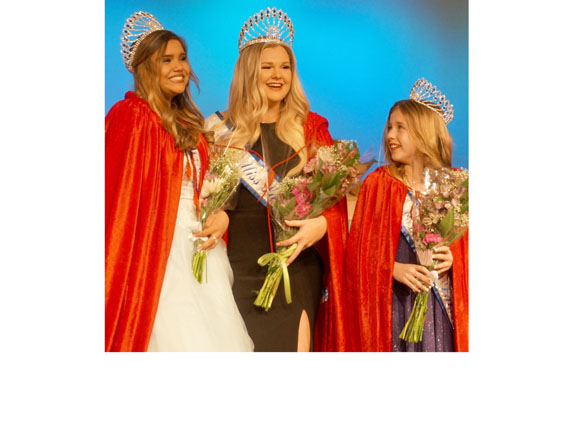 There’s a new Miss Lakeside for 2018 and her name is Brooke Talbot.

For the 56th year, the Miss Lakeside Pageant was held to select the young ladies who would represent this fair town. The pageant took place on Saturday, Feb. 10, in the Lakeside Middle School auditorium, in front of a crowd of parents and supporters that numbered well into the hundreds. Also selected were Madison Ellering as the new Teen Miss Lakeside and Hannah Lowery as the new PreTeen Junior Miss Lakeside.

There’s a new Miss Lakeside for 2018 and her name is Brooke Talbot.

For the 56th year, the Miss Lakeside Pageant was held to select the young ladies who would represent this fair town. The pageant took place on Saturday, Feb. 10, in the Lakeside Middle School auditorium, in front of a crowd of parents and supporters that numbered well into the hundreds. Also selected were Madison Ellering as the new Teen Miss Lakeside and Hannah Lowery as the new PreTeen Junior Miss Lakeside.

The accomplishment is no small feat, as anyone who witnessed the nearly four-hour event will attest. The 25 young ladies who competed worked hard for their honors. Even those who did not take home an award left the building with a sense of pride for doing what they had done and some relief for the fact that it was finally over.

After an excellent rendition of our National Anthem from Natalie Romano, Teen Miss Julian 2018, the night began with a rousing opening number involving all 25 contestants – plus the outgoing queens. It was a fun Broadway send-up filled with movement and dancing. The girls seemed to enjoy themselves, but then it was down to the business of the contest.

Each contestant had many individual moments within the program. The Casual Wear and Historical Fact Competition introduced each young lady and allowed her a moment to speak about a little Lakeside history. The Evening Gown Competition and On Stage Questions forced the girls to pick a random question (drawn from a bowl) and immediately answer it – no small feat in front of an audience of any size. During the event, the 12 judges made observations and notes and – ultimately – the final decision.

Brooke Talbot was selected as the new Miss Lakeside 2018. She was sponsored by Clark Steel Fabricators, Inc. Her princess partners are Tannah Jane Miinch and Isabella O’Neill.

For Teen Miss Lakeside, Madison Ellering took the title. She was sponsored by Mary’s Donuts and will be supported by princesses Sandi Molitor and Audrey Acuna.

At the PreTeen Junior Miss level, Hannah Lowery was awarded the crown, sponsored by Whaley Pool Construction. Her first princess will be Summer Barnes and the remaining nine contestants will be part of the Junior Court.

There were other awards given: for both Speech and Top Interview skills, the winners were Hannah Lowery, Georgie Willis, and Brooke Talbot. The Congeniality Award went to Hannah Lowery, Audrey Acuna, and Brooke Talbot. The Most Photogenic honorees were Hannah Lowry, Madison Ellering, and Tannah Jane Miinch. A special Director and Staff Award was presented to Alicia Asebedo and the People’s Choice Award went to Sofia Gotses. Finally, the Spirit Award was presented to Sophia Scalzitti, who collected the most sponsors and raised $2700 for the pageant.

The 2017 Court was honored and recognized for their efforts, each commenting on just how quickly one year can pass. Miss Lakeside was Francesca “ChaCha” Barnes; Miss Teen Lakeside was Brooklyn Campbell, and Miss PreTeen Junior Lakeside was Trinity Stewart. The trio became quite well known and often seen in the community. The enthusiasm and dedication was evident and appreciated.

Miss Lakeside of 2008, Anastasia Horning Jonilionis, expertly emceed the evening. Anastasia kept the show light and moved it along quite nicely.

While the girls were the evening’s center of attention, the driving force sat not-so-quietly from the sidelines with frequent smiles of joy and a few bittersweet tears mixed in. Jill Fleming is the director and has been running this event for 21 years now. She is personally involved with each and every contestant and it shows. While she has much help and support to get the job done, the success or failure of the night weighs upon her shouldered, though you couldn’t tell as she glided effortlessly through the pageant, from beginning to its triumphant conclusion.

While the winners can enjoy their success now, they will soon be hard at work. They have impressive shoes to fill – the 2017 court became admired and welcomed community ambassadors who logged hundreds of volunteer hours and raised a remarkable $81,000 for local charities and organizations.

Congratulations to the 2018 Miss Lakeside Court. We look forward to seeing you in the community. And to all the 25 young ladies who competed this year, you too deserve a round of applause as well.

Searching for Chi with Master Ben at the Lakeside Community Center