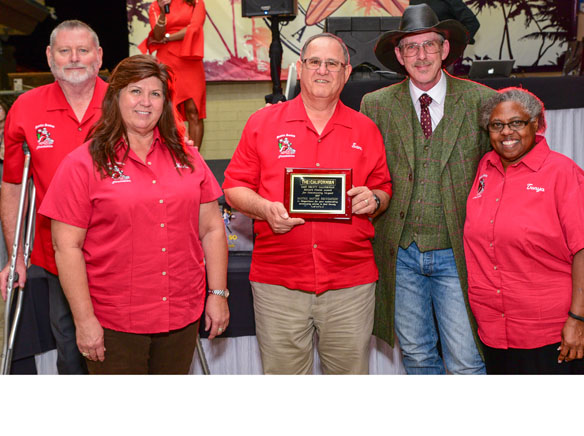 The second edition of the Best of East County Reader’s Poll winners’ party, The East County Californian, and hosted at the Elk Lodge in El Cajon last week was more grand than the inaugural edition held last year. During the award ceremony, it recognized community and business leaders and also remarkable individuals who excelled in their field in 2017, all of them selected via public vote by 34,000 of its readers.

The second edition of the Best of East County Reader’s Poll winners’ party, The East County Californian, and hosted at the Elk Lodge in El Cajon last week was more grand than the inaugural edition held last year. During the award ceremony, it recognized community and business leaders and also remarkable individuals who excelled in their field in 2017, all of them selected via public vote by 34,000 of its readers.

A notable exception though, was the inaugural Editor’s Choice Award for Community Impact, awarded to the Santee Santa’s Foundation, represented on the red carpet by its president, Sam Modica, and several of its 10 board members. The organizations has been around since 1953 and counts 3-400 volunteers “helping out in all of the different events that we do, with toy and food sorting, wrapping and delivery,” said Modica, adding that “We are very honored to be the recipient” of this award for providing “holiday meals to low income families, toys and books for the children.”

Albert Fulcher, the editor of The East County Californian said, “So many moments were nearly overwhelming as people poured into the event. It was wonderful seeing all of the happy smiles, warm welcomes and celebration. I believe that it embodied everything that the people of East County are all about. We had such support, not only from the winners, but the community at large, and that is what made it such a success.”

Having a DJ Troy Cook, TNT Entertainment entertained the crowed with music this year that brought the house down with the dancing and fun. Bonnie LaChappa, councilwoman on the Barona Tribal Council, danced a storm, celebrating the two awards received by the Barona Casino. LaChappa said, “This was an amazing event. This is my first year attending and I am having a great time” and that “giving back to the community is very important to my tribe. We are blessed and we made a promise we will always put our community first. We believe in being a good neighbors and we love Lakeside.”

Lisa Anderson, community volunteer with the Lakeside Friends of the Library is happy that her daughter, Delaney Pendleton, won Best Waitress award: “I am having a great time and I am surprised my daughter won. Her name is Delaney and she works for On the Border in El Cajon.” On the dance floor, there was Drummond Macomber, Chairman of the East County Leadership Alumni Association and a beloved Santa Claus for the El Cajon’s Mother Goose Parade and many other appearances. “We are having lots of fun. I love coming here; this is my fourth time this week. The Elk club is great. I’ve been a member here for 20 years. We meet the best and nicest people in the world here,” he said. Macomber added, “This is my home, El Cajon is my city and East County is our community. Whatever goes on here, we want to be a part of and help make it grow, help make it better.” Pointing to his traditional Scottish tartan he wore with pride, Macomber noted, “This is our family’s Kilt. This is what I got married in.”

Chatting at the table, sat Joel Scalzitti, owner at Mary’s Donuts in Lakeside and also Board Member at Helix Water district, along with Michael J Uhrhammerhael, public affairs officer for the Helix Water District. Lake Jennings slayed this year with seven awards and Uhrhammerhael joked, “This is not too bad. The awards are a great program that everybody needs to know what’s going on and where to go.” Scalzitti won two awards for his bakery and said, “This is really neat that they threw this on to notice people in East County and their efforts and everybody works together.”

Representing the Lakeside Rodeo Grounds as their marketing and advertising director and also passionate photographer, Kathryn Cunningham confessed,“ I am having a wonderful time. This is an amazing party. What is really great is that it brings all these people from all parts of East County. This is a great networking event.” The Lakeside Rodeo didn’t win an award this year, but “that’s ok,” said Cunningham, adding, “We give about $250,000 every year to local school kids, so that’s always an award right there in itself. “

The award-winning members of the Fletcher Hills Recreational Center with the city of El Cajon occupied the wildest table where, according to Heather Carter, “We do lots of fun activities for families.”

Mike Anderson, Lakeside realtor and chairman of the El Cajon Oktoberfest, brought his two sons, friends and family to celebrate his Best Realtor award. “I am having fun,” he said.  Anderson believes people voted for him “mostly because I am so involved in the community, so a lot of people know me. It’s not so much about how many houses I sold, it’s just that being out there and the people who care about this sort of things they know you.“

Pageant ambassadors were in the house in full swing with every community in East County represented, gracing the party with their presence and having a blast on the dance floor.

Rita’s Catering provided the delicious food and Parkway Plaza provided the swag bags for the guests filled lots of coupons and deals from local businesses whether they were winners or not.

There’s no real party without music and DJ Troy Cook from TNT Entertainment took care of that part. “Best of East County, baby, we are having some fun,” he exclaimed. Cook grew up in Granite Hills, El Cajon since he was a year old and is happy to provide the excitement to the honorable guests.

“For our winners, community leaders, pageant ambassadors and community friends that came to celebrate with us, I am so very thankful to them all,” said Fulcher. “I know they made my night and with all of the feedback I have received, I know that they had a wonderful time. And that’s exactly what we wanted. A fun event for the winners and those that make East County rock! This event has become more than I ever expected. We started wanting a celebration, not an awards style event and that is exactly what it was.”

During this Valentine’s Week, maybe it would not be such a bad idea to check out Lake Jennings for a hike, fishing or bird watching, voted as the Best Place for a First Date

Going further try out the El Monte Trail in Lakeside, the Best Horse Trail, or The Best Park Lindo Lake to walk the dogs. Maybe use that gift certificate for a massage with the Best Massage Therapist, Belinda Bird, have an Italian dinner hosted by Filippi’s Pizza Grotto in Santee after a visit to Ronda Brown in La Mesa who voted Best Manicurist. Don’t forget to tour  (Best Art Gallery) Hyde Art Gallery at Grossmont College, or check out the Water Conservation Garden (Best Nursery) for a spring garden. Of course, if the things get serious with a loved one, you have to stop by the Diamond Creations by Ramona (Best Jewelry Store) in El Cajon. Keep that Best of East County special edition, it is a guide to the people, places and organizations that the people of East County admire most.