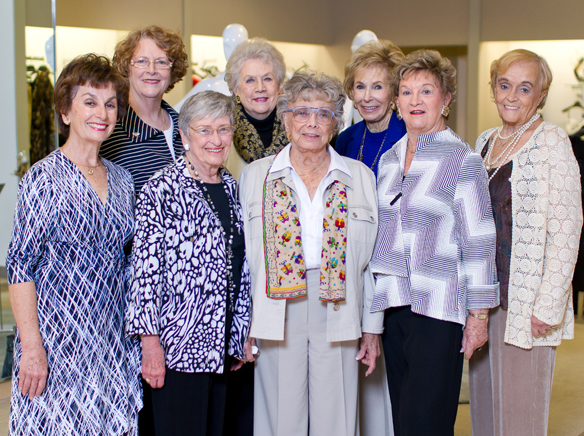 On May 12, local Globe Guilders will help raise funds for The Old Globe Theatre’s artistic and education programs at its annual fashion show and luncheon, Celebrating Couture 2015, at the Hilton San Diego Bayfront Hotel. The fashion show will feature elegant gowns and ready-to-wear styles by world-renowned couture designer Naeem Khan.

On May 12, local Globe Guilders will help raise funds for The Old Globe Theatre’s artistic and education programs at its annual fashion show and luncheon, Celebrating Couture 2015, at the Hilton San Diego Bayfront Hotel. The fashion show will feature elegant gowns and ready-to-wear styles by world-renowned couture designer Naeem Khan.

“Last year, the fashion show raised approximately $130,000 to benefit the Globe’s education, artistic and community programs,” said Suzie Poet Turner, chairwoman of Celebrating Couture 2015. “Our elegant fashion show is in its 25th year, and it’s our largest fundraising event of the year. Naeem’s2015 couture collection is dazzling and we hope this will draw our supporters and increase the amount we are able to donate to the Globe.”

Poet, from El Cajon, said Billie and Mac McKnight, who became long time friends, sometime in the late 1950’s or early 1960’s, took her parents to their first play at The Old Globe.

“Both my parents loved theater, and my mother, as a young girl, was taken to many plays in New York City in the 1930’s by her aunt. I remember my father telling me that he was very impressed with the production of “Julius Caesar in Plain Clothes,” she said

Her first “job” as a volunteer was working in the Theatre’s Box Office. In her early 20’s at the time she was “awed” by the older women who seemed to know so much about the tickets, the Theatre’s seating arrangements, the actors, and rehearsal schedules.  At this time, the Globe was a community theatre with only the summer having Equity Actors.

“Everyone, staff, actors, and other volunteers were very friendly and helpful. We were a family working for the success of the Theatre,” she said.

Poet said it is too difficult to choose a favorite memory out of so many. She said being elected into office in 1975, meeting Craig Noel, actors Christopher Reeve, Sada Thompson, Blair Brown, Daniel J. Trvanti an David Ogden Stiers had to be some of the top memories she carries.

“The tragedy of the fire in 1978, and the beauty of the rebuilding campaign thanks to all the wonderful and heartfelt donations from the citizens of San Diego. This is why, even though we may now be a “professional” Theatre, we are still of the community,” she said.

A third generation Old Globe supporter, Poet said it began with her mother, and now her along with her daughter has joined the legacy.

“Also, my husband, Mike, became a Theatre Board Member in 1980 and served for 6 years.  He has also been a member of the Finance and Audit Committees, and he still serves regularly on the Audit Committee,” she said.

As year round season ticket holders with four seats to all 14 productions, Poet said her husband and she share their love of the Globe with our friends, family and associates.

“Some of those people have volunteered at many of the Globe Guilder functions, including December Nights and the annual GG Fashion Show, that is celebrating 25 years in May. The Globe Guilders are 60 years young this year,” she said.

Poet said the Globe is a wonderful family.

“We care about its well being. The Globe has been very fortunate to have had Craig Noel as its ‘head master’ for many decades, and then followed by the multi–‐talented Jack O’Brien, and now Barry Edelstein. Barry has such a reverence and deep respect for the legacy that has been passed on to him. We love his passion, and his intelligence.”

Poet said she thinks the public knows how very fortunate San Diegans are to have such a fabulous Theater in their midst.

“The leadership, board and the Globe Guilders work to contribute to the ongoing financial strength of the Theatre. I want them to know that the leadership at The Old Globe is tirelessly working each day to continue to produce and bring plays that enlighten and educate all of us. The quality of everything they do is unequaled because of the love and commitment to The Old Globe…it is in excellent, smart, loving hands,” she said.

Guests will enjoy a champagne reception, silent and live auctions, an opportunity drawing and a luncheon. This fashion show attracts more than 600 supporters of The Old Globe, including philanthropists, heads of corporations and representatives of major organizations. Tickets start at $115. For more information and to purchase tickets please visit: www.globeguilders.org/fashion-show.

The Globe Guilders are a volunteer-based group who donate their talents and strengths to support the diverse programs at the Globe. With year-round programming on three stages and a strong presence throughout San Diego communities, The Old Globe Theatre is San Diego’s largest performing arts institution.

Children’s vision should not be overlooked