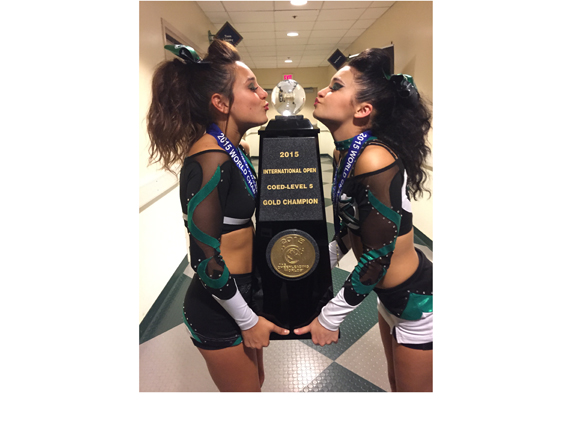 Twenty-four East County athletes reached the pinnacle of their sport by capturing the world championship in cheerleading late last month.

CheerForce, based in its own private facility on Broadway in El Cajon, reached the summit in cheer by claiming the International All-Star Federation crown in Orlando, Fla., on April 27.

Twenty-four East County athletes reached the pinnacle of their sport by capturing the world championship in cheerleading late last month.

CheerForce, based in its own private facility on Broadway in El Cajon, reached the summit in cheer by claiming the International All-Star Federation crown in Orlando, Fla., on April 27.

“Our degree of difficulty is high, with the worlds judging you on difficulty and execution,” said coach Andrew Price. “Both are weighed heavily.”

Nfinity, the club’s entry in the premiere 24 Open Coed Level-5 division, utilized several breath-taking moves to amaze the judges, plus a sell-out crowd at HP Fieldhouse, the centerpiece to the Wide World of Sports complex near Disney World.

Included was an impressive lift of seven female athletes by their male teammates into simultaneous poses similar to the Hamill camel (without the sit spin), a figure skating move made famous by three-time American champion Dorothy Hamill when she won the gold medal at the 1976 Winter Olympics in Innsbruck, Austria.

“We call that the Arabesque (aero-back),” noted Price. “It comes in the middle of our routine right after we do an even more difficult double-twist more that goes into a double pileup or a double-around position. It’s an impressive move.”

From there, a variety of lifts, tumbles and dance moves proved too much to beat by CheerForce, one of there American qualifiers out of 98 teams nationally from USASF (U.S. All-Star Federation).

On the final day of the 3-day event, all three teams that earned medals registered perfect routines during their 2:30 on the mat, with no deductions for errors. However, CheerForce captured the competition thanks to routines judged to be more creative and difficult to execute.

“It was close between the gold, silver and bronze teams because there were zero mistakes,” added Price. “We won because of our creativity and style. We’re unlike any other team in our division. We try to create routines that no one had ever seen before, with seamless flows from one section to another element.”

With the triumph at worlds, CheerForce capped an unbeaten season, also capturing the national title for the second straight year.

In 2004, CheerForce was also named overall Grand Champion covering all NCA divisions combined, while finishing second among all cheer squads this season.

Joining Price on the coaching staff are Analisa Price (his spouse) and Nicole Goodrich.

The previous best finish by an East County cheer club came in 2004, when the West Coast Mavericks captured the NCA national championship during the era prior to the creation of worlds. The Mavs later merged with another club (the Price’s SoCal Outlaws) to form CheerForce.

The club will soon began work for the 20015-16 season, with teams available for all ages and skill levels. For further information, contact CheerForce Facebook page.

Note: San Diego State cheerleader Ashley Cappo was severely injured during the live competition (in a routine not involving Cheer Force). The result of a failed aerial move saw a hard fall to the mat, where the Aztecs freshman suffer a compound leg fracture which required emergency surgery that night.