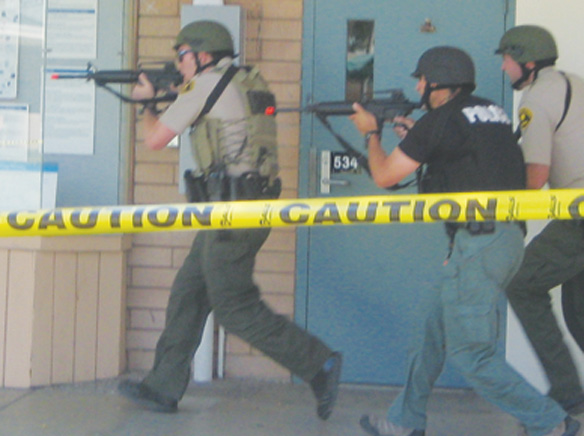 The past six weeks have brought a major change in public safety discussions across the country. The rise of the “defund the police” movement has dominated national attention, sparking a debate over the nature of law enforcement and the scope of their duties. Criminal justice activists throughout the nation have pressured their local cities and counties to cut funding from their respective law enforcement departments due to perceived systemic problems, most notably, that of alleged racial bias in policing.  Supporters of this movement seek to reallocate this funding to social services surrounding issues related to substance abuse, domestic violence, and homelessness, to name a few.

For weeks and even years, a significant piece of this conversation has been overlooked: Why are law enforcement agencies tasked with these issues to begin with? Might it be because we are best equipped and prepared to handle potentially violent situations?

San Diego County Sheriff’s deputies responded to over 200,000 emergency calls in 2019 where they were faced with a wide range of volatile or potentially volatile situations.  Deputies spend over a third of their careers in training, but there are scenarios they encounter on the job that require a specialized skillset, such as that of a mental health clinician or social worker. Recognizing that need, San Diego County established the Psychiatric Emergency Response Team (PERT) in 1995 to “provide effective and compassionate crisis intervention to persons living with mental illness” who are contacted by first responders.  A PERT team consists of a licensed health clinician and a PERT-trained law enforcement officer and seeks to “de-escalate a mental health emergency and, when possible, redirect the individual to mental health services instead of hospitalization or incarceration” (PERT Grand Jury 2015/2016). But PERT has experienced great difficulty filling clinician positions. And when a PERT clinician is not available to respond to a mental health call – which, between 2015-2019, represented more than 90,000 calls – a PERT-trained officer or deputy is dispatched instead.

PERT is 75% funded by the San Diego Health & Human Services Agency (HHSA). The HHSA devotes a robust $700 million to its behavioral health services programs.  Yet law enforcement responded to more than 10,000 mental health calls in a single year without PERT clinicians due to staffing limitations.  We must address the question of why this is the case. Why are these positions hard to fill? Why can’t they keep them staffed? Will they be able to find willing applicants to respond and help potentially violent people in a mental health crisis without the safety of a deputy sheriff by their side? We need to consider the heaviness, the peril, and the ferocity of the job we call upon law enforcement to do and how this affects the retention and recruitment of those being called to partner with law enforcement.

Additionally, the San Diego County Sheriff’s Department Homeless Assistance Resource Team (HART) was formed last year to “help connect people experiencing homelessness to services.”  HART deputies are often invaluable resources for those working to provide social services. We hear countless reports from deputies on the line that many clinicians and social workers do not feel comfortable entering homeless camps, or other unpredictable situations without a law enforcement partner. Let’s be honest, we love our public safety partners in the big red trucks, but they won’t even go into potentially violent scenes until the law enforcement officers make it safe and call them in.

Having licensed clinicians and social workers is clearly a critical component to serving those in our communities experiencing behavioral health crises. But when these situations turn violent, law enforcement officers and deputies are best equipped to respond. According to 2019 data, deputies responded to more than 40,000 calls related to mental health, domestic violence, substance abuse, and homelessness, of which 22% resulted in an arrest and only 1.6% resulted in a use-of-force.  While we’re proud of the fact that deputies have been able to handle more than 98% of these calls without using force, it is unreasonable to expect social workers and clinicians to respond to calls while unequipped to handle situations that require law enforcement intervention. Simply put, if we defund law enforcement, our region’s ability to combat these issues and ensure the safety of our care providers would be greatly diminished.

Furthermore, when we talk about defunding the police, many times the first programs on the chopping block are the proactive and specialized policing units, such as gang enforcement teams, crime suppression units, and community-oriented policing units. When law enforcement backs off from this type of policing, law-abiding community members in areas where there was once a proactive police presence often suffer.  Programs like these allow law enforcement to interact and build trust with the communities they serve.  It’s difficult to imagine what San Diego County would look like, and how many victims would suffer if the Sheriff’s Department didn’t have the resources to contribute to investigative units such as Border Crimes, Child Abuse, Sexual Assault, Human Trafficking, Internet Crimes Against Children, Elder Abuse and more.  When citizens are in crisis and call 911 for help, a willing deputy will always answer the call to assist, and that has to be a top priority.  However, “defunding the police” may mean the important and impactful work done by the investigative units mentioned above doesn’t get done.  That means less people get the justice they deserve, and some of the worst predators in our communities continue to hurt people.

The conversation surrounding law enforcement funding and reform is complex, layered, and nearly impossible to capture in a single article. And so, it is critical that our region’s citizens do their own research and avoid making decisions or rushing to judgement based solely on what they’re seeing on social media.

Unfortunately, politicians and social justice advocates continue to make decisions and assumptions without inviting law enforcement into the conversation. If we continue to point the finger at law enforcement without appropriate appraisal of the facts, law enforcement officers everywhere will continue to fall on the sword for all societal ills. This does not solve our problems. We owe more to our men and women in blue and the communities in which they serve.

President of the Deputy Sheriffs Association of San Diego County.

Children’s vision should not be overlooked