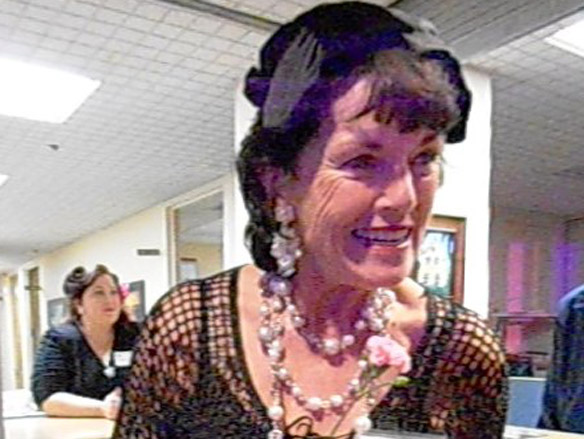 With well over 180 days of planning and a century in the making, La Mesa’s ‘Centennial Celebration’ culminated in a red carpet gala event, billed as “The Party Of The Century”, which took place on Saturday evening Jan. 12 at the La Mesa Community Center.

With well over 180 days of planning and a century in the making, La Mesa’s ‘Centennial Celebration’ culminated in a red carpet gala event, billed as “The Party Of The Century”, which took place on Saturday evening Jan. 12 at the La Mesa Community Center.

Hippie-clad Beth Morgante, Executive Director of the Grossmont Hospital Foundation, one of the multiple event sponsors, declared that she was channeling Grace Slick of Jefferson Airplane fame.
Morgante praised the efforts of the co-chairs of the event, Linda Horrell and JoAnn Knutson, stating, “They put in countless hours and (attended) monthly meetings, working with committee members and volunteers. Horrell painted all the scenic displays. She envisioned a progressive party that encompassed all the different eras of La Mesa’s 100 years,” added Morgante.

The event took place in several rooms of the Center and featured music and decor that defined each era.
Dressed in cowboy attire, Mayor Art Madrid delivered a speech to VIP guests in a tented area, praising those responsible for the evening that capped-off a year of diverse commemorative celebrations.

He explained that event proceeds would help fund the Lookout Legacy Project, which is a colorful, gazebo-like sculpture that will serve as a gathering spot to be installed at the intersection of Allison Avenue and La Mesa Boulevard. Sculptors and family-team Jess Rodriguez, his wife Mary Lynn and daughter Amy, mingled with guests and showcased a scale model of their $150,000 winning entry.

Congresswoman Susan Davis, dressed in suffragette attire, sported a sash that read We Want the Vote. She explained that she joined the League of Women Voters when she first arrived in California, and then referenced the significant role that women played at the turn of the century and (continue to play) throughout our history.
Kathleen Hedberg, Helix Water District board director, along with her husband John, praised the event and its coordinators.

“We’re having a wonderful time. They should have this every year,” she chuckled. Asked about the essential role that water has played not only in establishing, but in allowing the modern day expansion and thriving of La Mesa, Hedberg said, “Water has changed a lot in 100 years. Back then, they relied on local wells. To this day, it plays a pivotal role in our community, and I love my community. We strive to maintain a balance, making water available and affordable, especially with the onset of climate changes,” she added.

La Mesa Police Chief Ed Aceves stated, “1912 saw the first police chief of La Mesa. Since then, we’ve had 10 to follow in those footsteps.” He expressed his desire of keeping the city safe and wanting to maintain its low crime record.

Event co-chair Jo Ann Knutson humbly extolled praise for the tireless commitment of fellow co-chair Linda Horrell, while sporting ’60s garb including a peace sign necklace.
Horrell, who was dressed in a beaded gown and pearl strands, reminiscent of the roaring ’20s, reciprocated with admiration for her fellow co-chair.

Both acknowledged the concentrated efforts of the many visionaries that made the successful evening possible, expressing relief that response to the $100 plus per person ticket sales picked up considerably just over a week before the actual event.

In conclusion, a visibly beaming Horrell declared, “We have many people to thank, especially all the volunteers and board members. We got together, as good friends, and had a vision of throwing a party for our city that will be long remembered.”