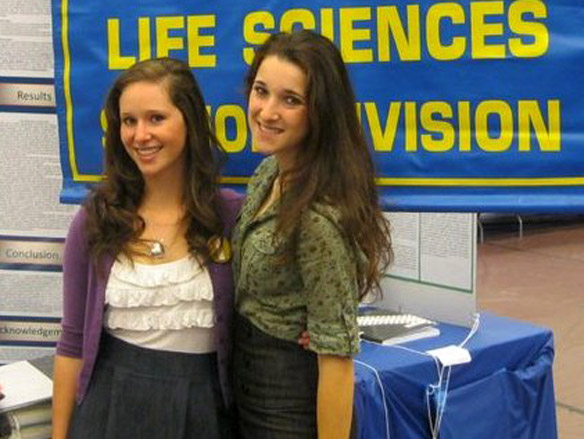 Finding a better method in early detection of aggressive prostate cancers was the goal of classmates Ali Tradonsky and Tammy Rubin for their high school science project in 2009.

Three years later, the research achieved, with the guidance of Tradonsky’s mother, who is a surgical pathologist at La Mesa’s Sharp Grossmont Hospital , has made its way into the June 2012 issue of the American Journal of Clinical Pathology, a national research review publication for medical professionals.

Finding a better method in early detection of aggressive prostate cancers was the goal of classmates Ali Tradonsky and Tammy Rubin for their high school science project in 2009.

Three years later, the research achieved, with the guidance of Tradonsky’s mother, who is a surgical pathologist at La Mesa’s Sharp Grossmont Hospital , has made its way into the June 2012 issue of the American Journal of Clinical Pathology, a national research review publication for medical professionals.

Furthermore, the study could signify a testing method for prostate cancer that would significantly reduce overtreatment, conditions and side effects related to treatment, and health care costs.

Tradonsky and Rubin, who are cousins, were classmates at the San Diego Jewish Academy, taking inspiration from each other. The two of them had been recruited to participate in a two-year high school science fair and research program.

Rubin admitted that from the very beginning planning stage, she and Tradonsky understood the huge commitment of spending two years as high school students doing research.
“We wanted our project results to contribute meaningful data to a field we were both so passionate about,” Rubin said.

Though prostate cancer seems a little obscure of a topic for two high school girls, it is a field now, more than ever, that is in critical need of not only a better screening test, but of more accurate criteria for treatment. Breast cancer, for example, already has prognostic markers similar to what we were looking for in prostate cancer.
“We were driven to discover groundbreaking research so desperately needed,” said Rubin, who from an early age had always been interested in pathology, human anatomy and physiology.

The two friends covered every aspect of the research project, from learning about the prostrate to attending an autopsy and a live robotic prostatectomy. They also learned how to grade and stage the cancer under the microscope. By the end of the two-year span, the girls were able to speak intelligently about everything from the actual cancer to the treatment process to the application of the research results.

When an opportunity to do the research presented itself at the girls’ school, they put their heads together.
“I believe that Tammy and I inspired ourselves, and each other to do research. My mom, Dr. Sharon Mair, inspired the specific project. As a team, I believe the three of us inspired each other throughout the process. Of course, we were also inspired by our desire to find meaningful results that could prove to be clinically useful in the future,” said Tradonsky.

It was the girls’ involvement in the STEM program (Science, Technology, Engineering and Math) at San Diego Jewish Academy that provided them the opportunity. Dr. Mair was their project adviser. All of the work, from conception to completion, done on this project was under the mentorship of Dr. Mair. “Tammy and I are so thankful for the opportunity to do this project, and we are eternally grateful to Dr. Mair for the endless hours of time and energy that she invested into helping us complete this project,” said Tradonsky

Dr. Mair, her daughter, and Rubin all knew that the project would be something very meaningful.
They had a focused passion for the project because, as Rubin explained, there is currently no method to differentiate the minority of aggressive cases of prostate cancer from majority of nonaggressive cases.
Initially, the goal was not particularly to find a method of detecting prostate cancer. Tradonsky explained that the purpose of their study was to search for molecular cytogenetic markers that can reliably predict prostate cancer prognosis at the time of diagnosis. We chose this project because there is no absolute test to determine how patients with prostate cancer will behave.

Traditional indicators such as tumor Gleason grade and stage are not absolute. Over 80% of cases are clinically indolent. Less than 3% die of their disease. Because there’s no test to tell which patients have aggressive disease, most are treated.
“This is a huge problem because prostate cancer is so common.

“We hypothesized that differences at the molecular cytogenetic level must explain outcome variability, so we studied prostate cancer tissues, looking at molecular markers, to see if any were statistically significant predictors of prognosis,” Rubin said.

The cousins’ drive and determination along with tech know-how and a keen aptitude for science, have led them both to college. “Neither Tammy nor I are completely sure about what we want to do with our futures career-wise. For now we are both hoping to be involved in some way in the medical field,” Tradonsky said.
These stellar young ladies, who enjoy movies, dating, and shopping just as much as their peers, have had several students now in the research program at the Academy come to them for advice on their projects.

“Tammy and I are eternally grateful to Dr. Mair for the endless hours of time and energy that she invested into helping us complete this project,” Tradonsky said.

Dr. Sharon Mair lauded the girls’ work ethic and determination. “You have everything it takes,” she said, adding that she felt “equivalent respect, admiration and love for the girls.” “Plus, you have the techno-savvy thing that I sorely lack,” she joked.