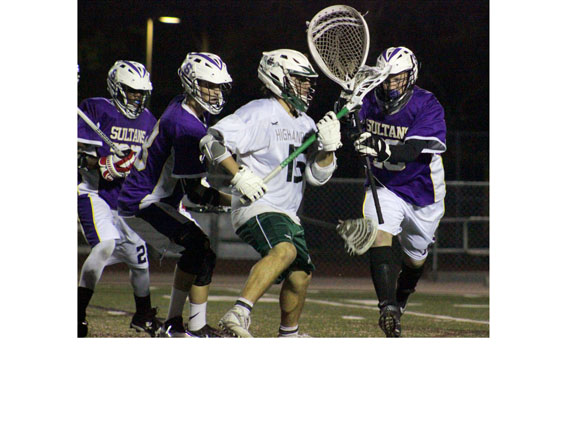 In the fall, Helix Charter High School has a full parking lot. Those Friday night lights turn on and the fans crowd into the stands uproariously. On either side of the field, a hundred people line the turf – coaches, players, trainers, and press. A scoreboard blinks ceremoniously.

In the fall, Helix Charter High School has a full parking lot. Those Friday night lights turn on and the fans crowd into the stands uproariously. On either side of the field, a hundred people line the turf – coaches, players, trainers, and press. A scoreboard blinks ceremoniously.

Spring entertains a different crowd. There are fewer cars, shorter lines to the concession stand. The scoreboard is broken. But the energy and excitement for the Highlanders remain unchanged, and as the boys’ lacrosse team took the field for their first home game of the season on March 16, faithful Scottie fans filed into the stands to cheer them on. Though there was still light in the sky, the field lights turned on, illuminating the stage for the evening’s grand battle, and Helix’s varsity lacrosse team took their positions.

A new season has begun.

For the Highlanders, this season could be its chance to finally break away from the pack. Last year, the Scotties took third in conference and lost in the first round of CIF.

“Third place,” said Helix head coach John Whittles, conviction in his voice. “We basically finish third every year. Grossmont and Granite finish one and two and we basically get that third position. But [this year] we have potential to be very good.”

Whittles has been growing his squad with patience. Last season, most of the bench was JV recruits getting trained for varsity-level competition. This year, they are ready to go, said Whittles.

“We have a lot of seniors,” he said. “We have a lot of kids who have really worked hard. This is definitely the hardest working team I’ve ever had. So we’ll just see if the results show it.”

Helix beat Santana 12-2 during their Thursday home game, but Whittles said their performance was not up to par with what he expects from the team.

“Too many passes getting thrown away, too many mental errors, it was not a good game,” he said. “We’re going to have to get at it tomorrow.”

The goal this season, said Whittles, is to beat Granite Hills, and to do that the Highlanders are going to have to play hard. The Eagles are currently 2-0 in conference and 3-4 overall.

“I think we need to tighten things up everywhere,” said goalie Nico Shoultz. “We’re pretty strong, we just have to get our game together.”

Shoultz is a team favorite, according to his coach “He just gets along with everyone.” Nearly as loud as the coach’s whistles were the friendly jests and encouraging calls to Shoultz as he guarded the Helix goal, letting only two shots slip past him all evening.

And while the varsity goalie said he does not put much weight in the idea that team bonding has a major impact on the field, he said he thinks the team certainly has some chemistry going.

“I think everyone gets along pretty nicely together,” said Shoultz. “There’s no real beef between anyone, we’re just a bunch of friends playing lacrosse.”

A lively match against the Sultans, the game gave ample opportunity for both Helix and Santana to make the most of the early-season con