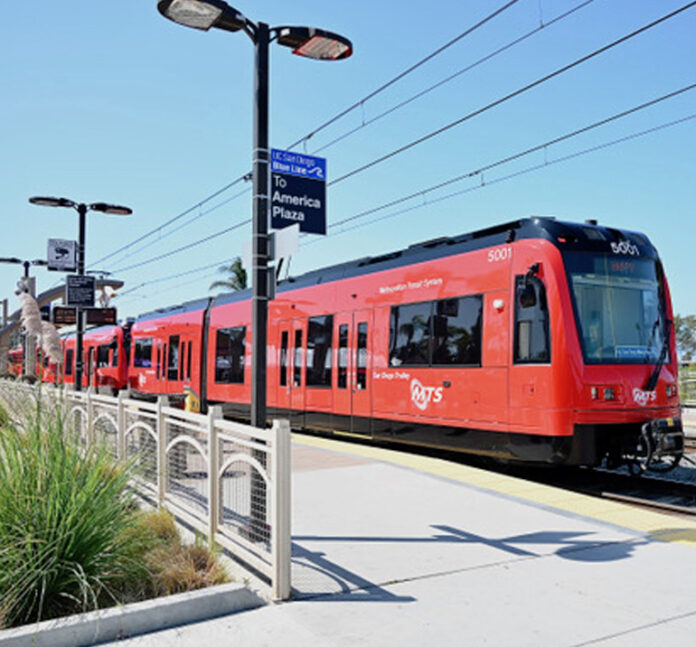 San Diego 350, so named for the number that leading scientists say is the safe upper limit for carbon dioxide, is a volunteer organization building a movement to prevent the worst impacts of climate change and climate injustice through education, outreach, public policy advocacy, and direct action efforts.

In action, that looks like San Diego 350 volunteers like Savanna O’Toole speaking up at a recent San Diego Association of Governments meeting where the agency announced plans to improve public transportation options between 2021 and 2050.

“We would like environmental justice to be embedded in San Diego,” O’Toole said, and called for changes including increased bussing on overcrowded lines, 24-hour trolley service “to connect late night to early morning workers to their jobs,” options for residents in underserved communities, no-cost transit plans for all riders 24 and younger to ensure generations of transit riders, an electrified bus fleet by 2030, and open bathrooms at all major transit stations.

San Diego 350 Public Policy Committee Chair Marie Chen, said improving public transportation can be tough, as microregions can include underserved communities as well as some that are very spread out.

In addition to mobilizing for transportation, San Diego 350 also has many volunteers working on the Climate Action and Renewable Energy committees, she said, a huge team that works with jurisdictions throughout San Diego County to improve their climate action plans and items like accountability and how to correctly measure baselines.

There is a relationship between social and environmental justice, Chen said but she views it as the same fight in different areas, with change dependent on dialogue to better understand people’s perspectives.

“We cannot just bring the more financially comfortable people into the climate battle- those people have the money to buy their own solar, their own batteries but as a software engineer, my mind works in data and when you look at the numbers, from a purely pragmatic point of view, we have to bring everyone along or we’re not going to be successful,” Chen said.

It is important, she said, to “talk outside the bubble” to those who don’t think climate change is important. Talking in terms of numbers, rather than social justice terms opens up the conversation with a different cohort.

Just as she supports reaching different demographics, she believes the organization succeeds when it applies different approaches to the same goal, with direct action efforts like public rallies and local outreach complementary to the policy work being done with local legislators.

She made an example of their recent push for a more equitable franchise agreement with fossil-fuel company Sempra, which owns San Diego Gas and Electric.

“We did not come out entirely successful, although the agreements are better than they were. Just looking at the approach, however, we did a direct action campaign with protests and rallies outside Sempra while others were talking to city council members, staff, writing letters. You have to approach policy as a multi-prong solution,” Chen said.

Their state legislation team does a good deal of training, she said, gathering people who likely have never been to a lobbying meeting and picking top priorities before meeting with “as many of our local state legislators” as possible.

“We try to train our members on how to speak at council meetings, state commission meetings, constantly trying to upscale our members so they can be better advocates, develop relationships with certain offices,” Chen said, as it works well to have youth in any meeting with elected officials.

“Traditionally, most volunteer organizations are older people and we do have a strong core of people who are die-hard and it’s inspiring to watch them work. However, we are definitely attracting more younger people, Millennials, recent grads… There’s been a lot of talk about working intergenerationally,” Chen said.

She said the organization considers it a welcome challenge to find local organizations and get out into their neighborhoods, work alongside them.

“You have to have pure conviction but be rooted in reality. You’re not going to win everything but you can always make progress,” Chen said, citing a Barack Obama quote: “Better is good.”