The sixteenth annual ArtWalk @Liberty Station event is happening on Aug. 7-8 with over 150 artists coming from across the United States and across the border, as well as from local neighborhoods to show and sell their artwork in a free, public setting.

Held outside, the artists will be on hand to answer questions about their work, including Duke Windsor, an accomplished artist who previously served in the Marine Corps as a combat illustrator and drill instructor and has worked for several decades as a professional artist.

Windsor says he defines his art “as a process that comes out of me and I can’t answer from where,” but needs to be shown.

The artist does not limit his self-description to one who works in plein air, or abstract or still life. He defines his work as “done by a studio artist with something to say,” a point proven by his wide-ranging list of credits. Windsor is an Associate Artist member of the California Art Club, Oil Painters of America, International Acrylic Painters Association, San Diego Watercolor Society and is heading toward his second decade of museum exhibit design work.

However, those varied mediums add up to a single artistic voice, and Windsor said everything he has painted translates to his next piece in an ongoing development.

“A line is a line, yellow is yellow. Even my abstracts come from my Alley Paintings, like the alley asphalt. The texture, the meat is the same thing on there,” Windsor said.

His work, he said, is informed by the Masters who left visible brush strokes, a sort of lesson on canvas. He studies their works because “the Masters did the best work they could with what they learned” and what he also strives to do.

Additionally, his experience in curatorship informs his approach to each piece.

“There’s two trains of thought. Sometimes when you do artwork— a sculpture, a single piece— it might not be something done for a museum. I try to get away from doing a piece for a certain reason like a gallery or museum. However, the museum side taught me other sides of what I do as an artist: how to organize, catalog and preserve my work, how to hang a show and create a show in a cohesive setting,” Windsor said.

The years he spent in the Marine Corps come through as well, in the business side of his work.

“The Marine Corps taught me how to organize my time: between my day job and getting off work, I get in here and paint for a couple of hours; then in the evening I work several more hours as well as any holidays so there’s always enough time to work. If I’m not working on artwork here at my studio, I’m working on the office side at my computer,” Windsor said.

Each piece he works on has its own story, whether or not it becomes part of a show. The artwork, he said, talks to people in different ways depending on where he is showing his work.

“I let the work become the show. There are times I pick subjects with what I’m working on, like the urban scenes. Every time I turn around, even if I’m showing in another state, people say something like ‘I remember San Diego State University’. With abstract work, maybe it is the color, the mood of the piece that elicits the response, but that’s when it becomes artwork. In my studio, on my easel it’s just a concept, then a finished piece but when it goes to a show on a wall, now it becomes a work of art. That’s when it has graduated,” Windsor said.

The ongoing COVID-19 pandemic, he says, means people have missed out on the dialogue, the conversation between the artwork and viewers. Although he expected this to be “a quiet year” with many people distancing, it has actually been a busy year for him with many hours spent in the studio.

Visit www.artwalksandiego.org for more information on the event. 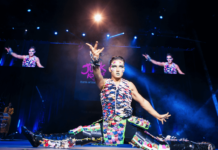 Fashion with a re-purpose 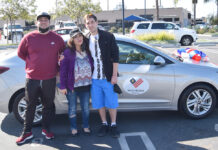 New vehicle key to helping vet get ‘on his way’ 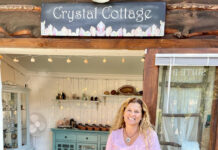