The Granite Hills High School boys soccer team appears to be trending upward at just the right time of the season.

The Eagles improved their record to 4-5-3 after pulling off a penalty kick tiebreaker win over the Montgomery Aztecs in last Saturday’s Gold Division championship game of the San Diego County Cup/Quin Murphy Tournament at Hilltop High School.

Granite Hills kicked off the 2019-20 season in disappointing fashion with an 0-3-2 record (three losses, two ties) but has since rebounded with a 4-2-1 mark (four wins, two losses and one tie) in its last seven games.

“This is a great way to go into league,” Granite Hills head coach Jason Heth said in regard to his team’s new-found momentum.

The tiebreaker went seven rounds before a winner was decided to conclude the marathon match.

Senior Abdulrahman Ismael scored from the penalty dot to give his team a 6-5 edge in the shootout tiebreaker. The Eagles clinched the victory when senior goalkeeper Bradley Ramos dove high to his left to deflect a shot by Montgomery sophomore Julian Garcia.

Ramos also scored in the tiebreaker round to keep his team in position to snatch the dramatic victory.

Heth said is not uncommon for a goalkeeper to take a shot on another goalkeeper in the penalty shootout.

“He has a lot of confidence that he can score,” the GHHS coach said.

“As a shooter, I pick my spot before I even get to the ball,” said Ramos, who made numerous saves during regulation and overtime to keep the match scoreless. “As a goalie, I read hips. I watch which way their hips are facing — that’s the way I dive.” 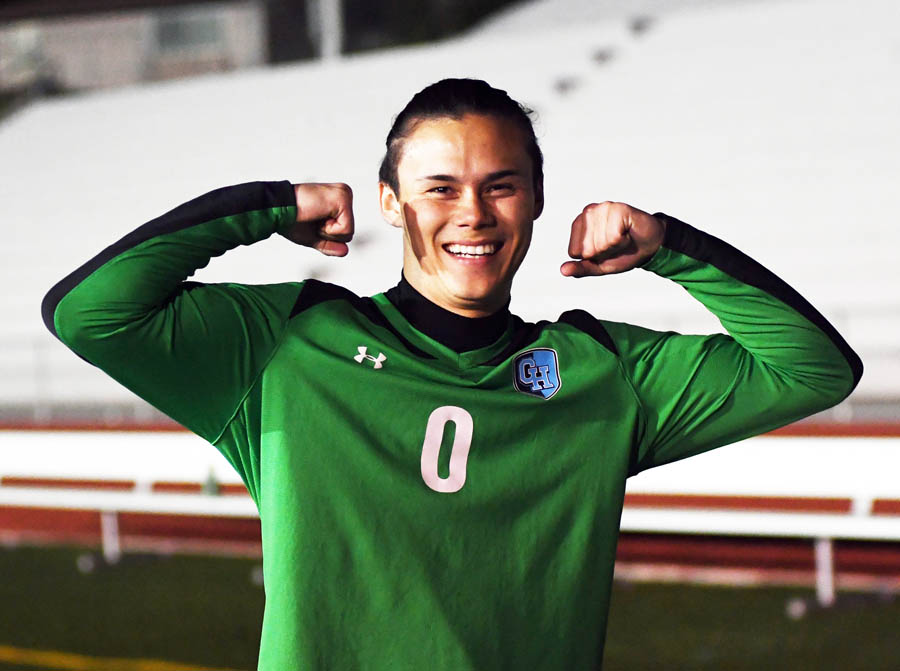 The tournament final was the third game in four days for Granite Hills, which had battled visiting Oceanside to a scoreless draw the previous evening in non-league play.

The Eagles were also battling injuries during the holiday break.

“Everybody contributed in one way or another,” said Heth, whose team finished with three wins in four tournament games. “We had two tough back-to-back games. They (the Aztecs) beat us 2-0 in the Grossmont Holiday Classic just before Christmas, so this was a good win for us. I was proud of the discipline shown by my players, their tenacity and hard work.”

The tournament finals were delayed due to rainouts. Granite Hills kicked off pool play Dec. 23 with a 4-0 win over Valley Center, then dropped a 7-2 decision to Bonita Vista on Dec. 26.

The Eagles rebounded in mighty fashion with a 2-1 upset over third-ranked Hilltop in the tourney semifinals on Dec. 28.

Ismael echoed his coach’s words about the team’s recent turnaround in the results column.
“Our hard work paid off,” Ismael said “We’ve been really working hard in practice.”

Jonathan Moreno and Diego Barragan each scored one goal for Patrick Henry (6-3-4) while Aaron Jimenez recorded the goalkeeper shutout as the Patriots finished undefeated (3-0-1) in tournament play.