The 49th annual El Cajon Invitational wrestling tournament is San Diego County’s longest-running tournament with a rich tradition. It has grown to become one of the premier wrestling events in Southern California.

This year’s event took place last weekend, Dec. 13-14, at San Ysidro High School to accommodate the 50-team field that showcased some of the best teams and wrestlers from not only the San Diego Section but from around the western region as well.

Robinson dropped a highly competitive match to Imperial junior Nathan Galbiso by a 10-7 decision. The score was tied 7-7 before the Tiger wrestlers scored the decisive points late in the match to remain undefeated on the season (10-0).

Robinson, seeded third, finished the two-day tournament with a 3-1 record, with all his wins coming by pins, including two first-period falls. He pinned second-seeded Dominic Pacheco of St. Augustine in 2:33 in the semifinals.

“I just want to keep working hard, each day try my best whether it’s on the mat or off the mat,” Robinson said. “I was actually hoping to win this tournament and get the most valuable wrestler award but I’m pretty happy. I beat some good kids. I lost a close match to a good kid.” 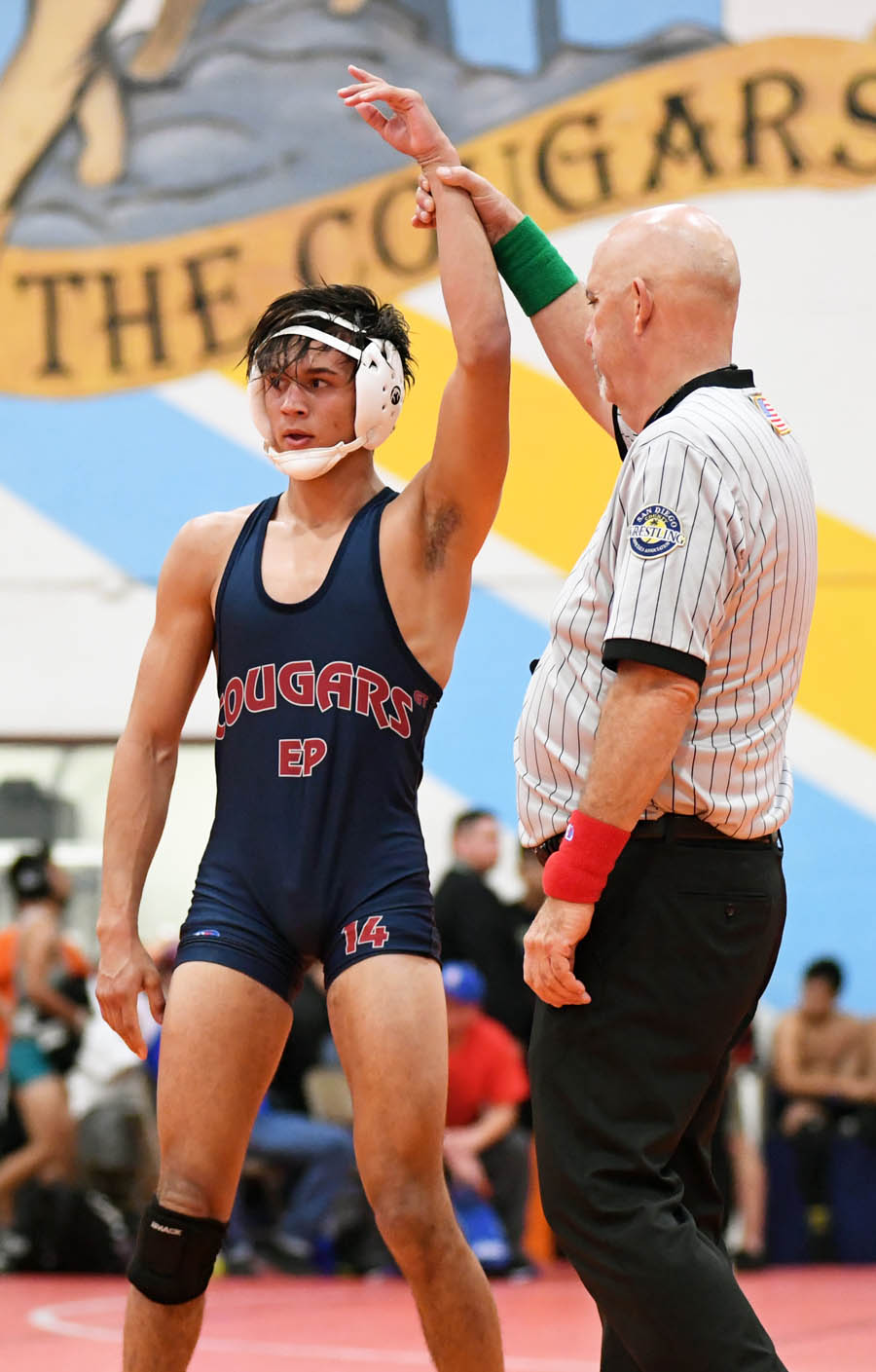 Cardenas, seeded fourth, won his opening three matches. Following a loss by a 1:27 pin to top-seeded Spangler in the semifinals, Cardenas wrestled back with two more victories to place third in the weight class.

Cardenas defeated Hilltop’s Dominic Gurule-Metzig, the champion at the preceding weekend’s Mira Mesa Marauder Invitational, by a 7-1 decision in the consolation semifinals.
Cardenas captured a 9-3 decision from Cole Hickey from Cienega (Vail, Ariz.) to complete his tournament odyssey in the bronze medal match.

Spangler (6-0) earned the lower weight MVP award with four pins and a 5-0 record. He defeated Frontier senior Jose Landin (8-2), ranked 13th in the state, by a 7-2 decision in the championship round.

“It was a tough tournament,” Steele Canyon head coach Mark Gerardi said. “I’m pleased with how our guys did. We didn’t bring a full team, had a couple of placers. They wrestled well.

“Logan wrestled fantastic and so did Ezra, whose only loss was to the champion.
“We’re a young team; I think we have a couple guys who are contenders to qualify for state.”

Jordan won his opening four matches, including three by pin, to reach the championship round before dropping a 7-1 decision to Frontier senior Josh Acala in the finals.
Jordan, who previously finished first in his weight class at the Mira Mesa Marauder Invitational on Dec. 7, pinned San Ysidro’s Rahman Ferguson in the semifinals.

Jordan, Garcia and Carmona all won their weight classes at the preceding weekend’s Marauder Invitational in which the Norsemen scored a second-place team finish.

Second-year Valhalla head coach Jason Bedsole believes his team can be a contender this season after placing 3.5 points behind Granite Hills at last weekend’s ECI tournament.

“We have a mix of seniors and underclassmen — it’s going to be interesting,” said Bedsole, who graduated from Valhalla in 1995 before going on to wrestle at Palomar College and Fresno State. “We have a good blend. It’s building.

“We had three medalists at this tournament this year; we had no medalists last year.”
Valhalla hosts Granite Hills Jan. 9 in what is shaping up to be one of the highlights of the season.

Satberry won his opening four matches, including three by pin, to reach the semifinals. After dropping an 11-7 decision to Mt. Carmel’s Nick Burwell, Satberry took sixth place by a medical forfeit.

Hillberg, who had two pins in the tournament, defeated Olympian’s John Johnson by a 3-1 decision to place seventh.

Lo finished 4-2 in his weight bracket with four pins. He advanced to the semifinals on the strength of three consecutive pins, including two in the first period, before dropping a match by a 1:27 pin to Maranatha Chrisitan’s Noah Rupp, the eventual runner-up.

Lo bounced back with a 3:21 pin of Cienga’s Ritchie McCormack in the consolation semifinals to reach the third-place match, which he dropped by a 17-1 technical fall to Sultana’s Nathan Aguiniga.

Graves also posted a 4-2 record at this year’s ECI, scoring one pin, one major decision and one technical fall. He defeated Olympian’s Brandon Dequito, 18-3, to place seventh.

Helix moves to the Grossmont Valley League for dual meet competition this season, joining Monte Vista, Mount Miguel, El Cajon Valley, Santana and El Capitan in what looks like to be a very competitive field.

“We have a mix of veterans who will lead the team and some freshmen who will make us competitive for the league title,” Helix coach Adam Krzywicki said.

McMillan lost by a 4:22 pin in his final match to San Marcos’s Ricky Johnson.

Moses Lake, with nine medalists, had two finalists and one weight class champion.

Sultana senior 138-pounder Ryan Spangler, ranked third in the state, earned the lower weight MVP award with four pins and a 5-0 record. He defeated Frontier senior Jose Landin, ranked 13th in the state, by a 7-2 decision in the final.

Pete Salmu received the Most Outstanding Wrestling Officials award at this year’s ECI. The award was presented prior to the finals. “It took me by surprise,” said Salmu, who is part owner of Santa Fe Meats in Chula Vista.