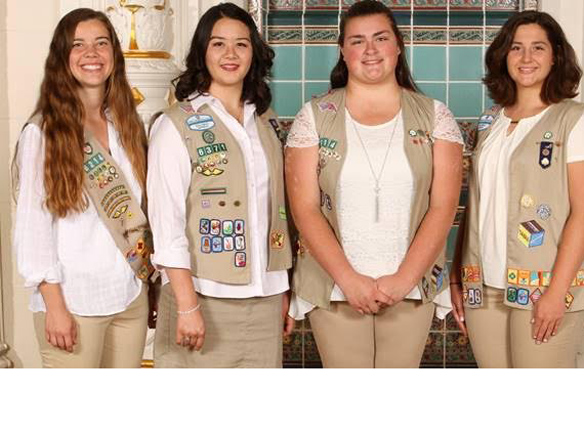 For her Gold Award project, Emily addressed the refugee experience — why they come to America, and what they do here. She shared her findings with fellow students at El Capitan High School (where Emily is currently a senior at the top of her class, and a member of the varsity swim and water polo teams). As an outcome of her project, the school is seeing a less racially biased student body than prior decades. A member of Troop 6191, Emily had previously earned a Bronze Award, the highest accolade a Girl Scout Junior can earn. She is the daughter of Susan and Gary Burghart.

Lauren, over a two-year period, taught the art and history of crochet during weekly classes at locations across San Diego, including animal ranches, commercial stores and fairs. Covering traditions from multiple countries, she demonstrated that fiber arts can be affordable and easy. A member of Lakeside’s Sagebrush 4H Club, Lauren has won multiple awards for her fiber arts creations, including first place at the 2016 San Diego County Fair and Best in Show at the 2016 Ramona Junior Fair. An independently registered Girl Scout member, Lauren earned her Bronze and Silver Awards in prior years, and is a recent graduate of El Capitan High School. Her parents are Sharon and Michael Mello.

Stephanie developed an after-school gardening club at Hillsdale Middle School, where she composed a science resource manual and planned a workday to build extra gardening boxes. She used the food the club grew to teach optimal nutrition as well as cooking skills. The daughter of Amy and Guy Fox, Stephanie earned her Silver Award (the highest award for Girl Scout Cadettes) and Bronze Award while a member of Troop 6214, which was led by her mom. Stephanie graduated from Valhalla High School Class in 2016, and is currently working on a B.S. of health science degree at Chapman University.

To earn her Gold Award, Miranda began a robotics team at Liberty Charter High School to address the lack of STEM (science, technology, engineering and math) extracurricular activities in her district. By giving students hands-on technology experience, she hoped to generate interest in STEM careers as the fields continue to expand in opportunity and prominence. Miranda, whose parents are Sarah and Calvin Ng, earned her Bronze Award as a Girl Scout in Troop 6371. A member of the Liberty Charter Class of 2016, she is now a chemical engineering major at Cal Poly Pomona.

TaylorAnn Quick renovated the youth center at Christie’s House, an HIV/AIDs resource, for her Gold Award project. She gave adolescents a safe, comforting and enjoyable place to interact with peers facing similar challenges. She upgraded the facilities with electronics to enable them to work on homework there, too. For many years a regional top Girl Scout Cookie seller, TaylorAnn earned her Silver Award as a member of Troop 6332. Past troop community service projects had included volunteer work at Christie’s House, which led to the idea for her Gold Award. A recent graduate of Helix Charter High School, she is the daughter of Lisa and Kenneth Quick.

The East County Gold Award recipients all started Girl Scouting in Elementary School. Emily, Stephanie, Miranda and Amy joined as Daisies in kindergarten; Lauren began as a Brownie, and TaylorAnn as Junior.

The girls are among 55 Girl Scouts in San Diego who received the Gold Award this year, and were honored during a recent ceremony. Girl Scouting’s highest award recognizes young women for outstanding leadership and commitment to taking action in their community and around the world. The Gold Award is the most current in a series of Girl Scout honors — starting with the Golden Eaglet of Merit in 1916 and including the Curved Bar and First Class — that have acknowledged the power behind each recipient’s dedication to empowering and bettering herself, and making the world a better place for others.

Santee resident mixes and matches to create her art

Adult and junior crews keep beating the drum of positivity