Sanchez has seen a lot transpire as the sport has developed over the years in San Diego County from one boys division to multiple gender divisions. But it’s nothing like what’s transpired since last spring’s declaration of the COVID-19 (coronavirus) pandemic.

The pandemic continues to rage as the 2020-21 interscholastic term is set to start; it continues to play havoc with sports schedules.

The State CIF Office announced July 20 that fall sports would be pushed back to a second semester start to better deal with health risks posed by the virus. Practices are now scheduled to start in mid-December with the majority of competitions (depending on the sport) starting either during the last week in December or the first week in January.

With the three traditional seasons of interscholastic play (fall, winter and spring) now crunched into two seasons (fall and spring), the modified schedule has led to some rather unique — and correspondingly, challenging — developments such as the boys water polo and girls water polo seasons being played concurrently. 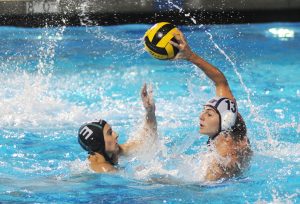 “Scheduling, transportation … every coach will face difficult challenges,” Sanchez noted in going over a check list of potential coaching headaches. “We’re fortunate in the Grossmont Conference that all of us have a pool. Not everyone in San Diego County can say that.

“Everybody is hoping for the best. I think we’ll have everything in place.”

Meetings have already taken place at the coaches advisory board level to iron out many anticipated conflicts, especially in confirming that enough game officials will be available for both the boys and girls seasons.

Many county programs field three teams for each sport – varsity, junior varsity and novice. That equates to a potential of six games if both genders are scheduled for a home game. That would make for an exceedingly long day for coaches who coach both genders and game officials who referee both genders.

Though schedules have not yet been finalized, Sanchez suggested there could be a reduction in the number of games played at any one site on any given day.

As a consequence, novice games might have to be played on separate dates.

Besides modifications to schedules, Sanchez said new rules will also come into play this season which will create more challenges. Those new rules are designed to create more offensive plays and scoring opportunities.

“Seventy-five percent of the kids have not played with these new rules,” he said.

Sanchez said the proposed winter start is a plan — if things work out so that high school sports can be played in 2020-21 — but is not a definite timeline.

“If all the stars align, this is how we do this,” he said.

Sanchez gives much credit to Brian Wilbur, the San Diego Section water polo tournament director who also serves as the Grossmont Conference president, for helping place things in order for the modified season.

“He’s done a great job in putting the various elements together,” Sanchez said.

“We are adjusting to this,” Sanchez said. “Everyone is trying to do their best.  We all want to get back in the water when it’s safe to do so, but not at all costs. The kids are super excited to know that something is in place to have a season.”

Pools might actually be the safest place to conduct sporting competitions due to the effect of chlorine as a “inactivating” agent against germs and viruses.

According to the U.S. Centers for Disease Control and Prevention (CDC) there is no evidence that COVID-19 can spread to people through recreational water.

Sanchez and his student-athletes have already received a primer in the “new normal.”

“Kids came to the pool in their masks, we had one swimmer at the end of each lane, a lot of conditioning, no physical contact,” Sanchez enumerated. “The kids were excited to be back in the pool and be around their friends. At the end we did some shooting on an open cage.”

Because of social distancing mandates, Sanchez said it was the first time he had to limit participation.

He hopes that high school sports can go on during these uncertain times.

“High school is such a big part of people’s lives,” Sanchez said. “It’s the first time that kids get their hearts broken and the first time they break someone else’s heart. It’s a special time to experience.”

Matadors’ Cory Littleton — from a Ram to a Raider