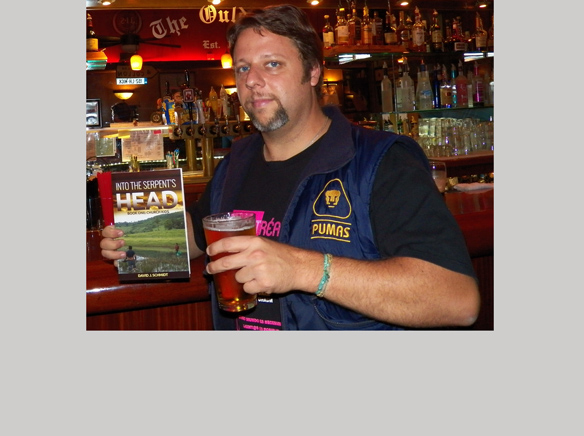 David J. Schmidt splits time these days between La Mesa and Mexico City. Although Schmidt makes his living as a freelance translator, his real driving life’s interest is in investigating and writing about credible accounts of paranormal phenomena. His most recently released book describes his journey to the Mexican village of San Juan Coatzospam in search of ghost stories.

David J. Schmidt splits time these days between La Mesa and Mexico City. Although Schmidt makes his living as a freelance translator, his real driving life’s interest is in investigating and writing about credible accounts of paranormal phenomena. His most recently released book describes his journey to the Mexican village of San Juan Coatzospam in search of ghost stories.

Schmidt, fittingly, sat for an interview about his new book, first in a planned series “Into the Serpent’s Head,” on Nov. 1. That day, along with Nov. 2, is celebrated in some regions of Mexico as a “Day of the Dead” honoring and remembering loved ones who have left this earthly life. This initial publication in the series is subtitled “Church Kids.”

Schmidt explained how the book series came about, from his trips to Ensenada as a translator for youthful Baptist missionaries. While there, he met a local Baptist woman, Mama Lola, who hailed from the southern state of Oaxaca, and she related encounters with strange creatures, supernatural forces and witchcraft when she was a child in her native town. She urged him to go to her birthplace as a missionary to combat the “witchcraft and evil spirits.”

Schmidt was intrigued, but he was on something of an introspective spiritual journey already, experiencing doubts as he matured about the “cocky” certainties of the fundamentalist religion he’d grown up in. In 2006, Schmidt exited from his final Ensenada mission trip. His short book recounts his troubled state of mind as he prepared for travel alone to San Juan Coatzospam, a town dependent on coffee farming that was named both for the Spanish Catholic saint and for the ancient Aztec language word meaning “head of the snake.”

Schmidt was on his way to Oaxaca. He intended to visit Mama Lola’s Mixtec village as a paranormal investigator.

During the interview, Schmidt discussed the following three books in his “Serpent’s Head” series, which complete the tale. He said that on his arrival, he found Coatzospam to harbor no immediately apparent apparitions or unknown animal species. What he saw was a nearly empty, deserted place — colloquially, a “ghost town.” Schmidt asked himself, “Where are the young people?” And when he queried them, the townsfolk replied that the younger among them had left, because the rural farming community no longer provided a living income from the village’s former livelihood of growing coffee.

Schmidt was visiting as an investigator, so he turned his examination from the paranormal to what had devastated the local coffee-farming enterprises. “I started to feel despondent,” Schmidt said. The best he could ascertain, in the aftermath of the North American Free Trade Agreement (NAFTA), a “rollercoaster” price for coffee created extreme poverty and exploitation in Coatzospam as consequences of the cross-border managed trade agreement among the countries of Canada, the United States and Mexico. Coffee farming had formerly provided sufficiently stable income to support a family of rural villagers, but no longer could.

Schmidt further noted, however, that as he spent more time in that remote area of Oaxaca, he may have been asking other questions the wrong way. People began telling him stories of encounters with unusual kinds of mountain beings and spirits. “This isn’t strange,” the townsfolk said. “This is normal.”

Schmidt reported that he came to appreciate the Mixtec villagers’ “unified worldview,” as members of an indigenous culture in which the spiritual and material realms commingle in experiences of daily life. He continued, saying that the story has a “happy ending,” in that the penetration of information access into rural areas has allowed the villagers to establish a co-operative venture that sells locally grown coffee directly to “fair trade” marketers, at a sustainable living wage for the farmers.

Schmidt has slated all proceeds from the book’s sales to go to the coffee farmers of Coatzospam.

Schmidt sat for the interview at The Ould Sod pub in Normal Heights, as Irish folk musicians set up to perform.

“I wrote the book here mostly,” Schmidt stated.  He went on, saying that the Celtic music and atmosphere inspire him to write. “The cultures of Ireland and Mexico, based on indigenous lifestyles, have a healthy appreciation for the paranormal. Both are warm, affable, and rich in legend, folklore and mystery.”

He had a few other wry parting thoughts. “Unlike for ‘gringos,’ these cultures celebrate Halloween and Days of the Dead not as dark holidays. For them, death is a reality, part of life. They mourn and view death as tragic. But I find their view more mature and human than our common dark outlook. They find beauty, sadness, fear and happiness in reflecting on lives that have ended. Death is all those things put together for rural folk.”

More information, including format and purchase options for Schmidt’s books, can be found at www.holyghoststories.com.