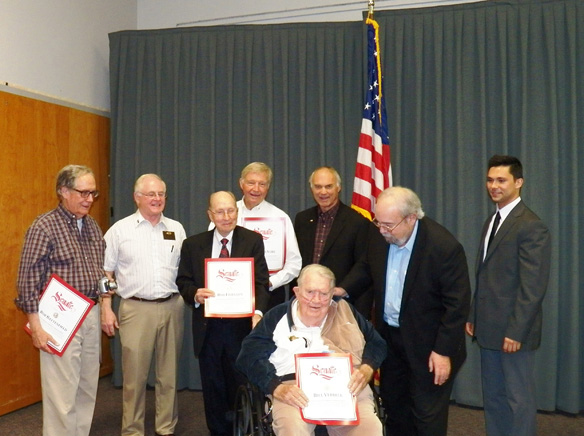 Three-quarters of a century of doing good works is deserving of special celebration. And La Mesa Kiwanis members did just that on the evening of Feb. 19, as they gathered at the La Mesa Community Center to commemorate 75 years of their organization’s service benefiting La Mesa and beyond. La Mesa Kiwanis received its original charter as an organization on Feb. 20, 1940.

Three-quarters of a century of doing good works is deserving of special celebration. And La Mesa Kiwanis members did just that on the evening of Feb. 19, as they gathered at the La Mesa Community Center to commemorate 75 years of their organization’s service benefiting La Mesa and beyond. La Mesa Kiwanis received its original charter as an organization on Feb. 20, 1940.

Mark McDonald rose to the rank Kiwanis District Governor for the California-Nevada-Hawaii region. He said he was proud to have been a friend of the La Mesa Kiwanis for 20 years, while belonging to the downtown club for 27 years. In speaking about major accomplishments of the La Mesa club, McDonald spoke enthusiastically of the group’s emphasis on leadership training for adults and youth, by teaching how to lead as servant leaders. He said the La Mesa club took over responsibility for sponsoring the Soap Box Derby in the early 1980s.

“This is a great anchor club,” McDonald said. “La Mesa Kiwanis is involved in most everything in La Mesa.”

“I am here to support the group’s 75 years of service,” England said. “La Mesa Kiwanis is the heart of the community. We are proud to be your partner, proud you’re a member of the Chamber of Commerce.”

Glenna Bloemen is a local realtor and Kiwanis member, who served in chairing the Diamond Anniversary event that night.

“Our club became the lifeblood of this community,” she said. “We have trained many of the elected officials and other movers and shakers who’ve helped make La Mesa what it is today.”

She said the club’s fundraising for the Miracle Mile of Quarters, bringing in donations to support Rady Children’s Hospital, and sponsorship of La Mesa Flag Day.

“We help wherever we can, so just let us know how we can help,” she said.

Gary Jander, another past Kiwanis district governor, praised La Mesa Kiwanis for having an impact beyond the La Mesa community. Notable achievements of Kiwanis internationally have included a project to eradicate tetanus worldwide and programs to combat iodine deficiency disease.

Kiwanis itself is celebrating its centennial year in 2015. Two Detroit natives, Allen S. Browne, a professional organizer, and Joseph C. Prance, a tailor, started the organization, which traces its origins to Jan. 21, 1915, when the state of Michigan delivered the group’s corporate charter. First dubbed, “The Supreme Lodge Benevolent Order Brothers,” the businessmen who were initial members disliked belonging to a group called “BOB,” and then sought a more memorable name. Detroit’s official historian suggested borrowing a phrase from an area American Indian tribe, “NunKeewan-is,” supposedly meaning “We trade.” Later investigation provided a better translation of “We have a good time, we make noise.” Either moniker works for a group of business professionals united for networking and service to their local community, in a spirit of fun camaraderie.

Kiwanis has had an international flavor almost from its inception, with a cross-border club dating to 1916 in nearby Ontario. In 1920, the Kiwanis motto became “We Build.” Worldwide expansion occurred during the 1960s. By 1987, women were admitted as Kiwanis members. The organization offers the largest youth service and leadership training programs in the world. The new Kiwanis slogan adopted a decade ago is this: Serving the Children of the World. Affiliated organizations include K-Kids at the elementary level, Builders Clubs for middle-schoolers, Key Clubs at the high school level, and Circle K Clubs for college students.

La Mesa Kiwanis meets twice monthly, on the second and fourth Thursdays at 6 p.m. The group’s current meeting place is Marie Callender’s Restaurant & Bakery, 6950 Alvarado Road. Interested in joining for the next 75 years of service? Contact Bob Shultz at (619) 689-6688 for membership information.