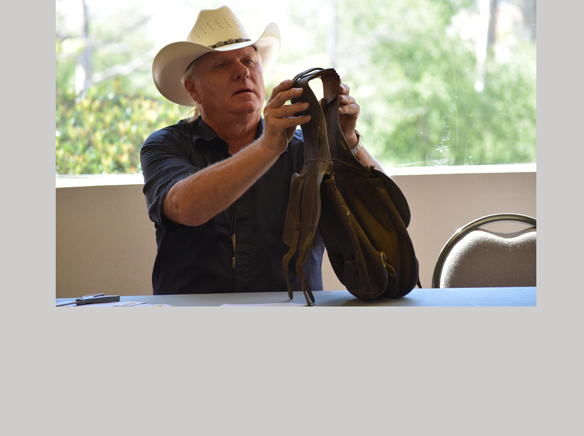 With Trader Joe’s bags, baskets and plastic containers, people gathered July 23 to survey and appraise their treasures and collectibles, many of them passed down through generations. With such an eclectic array of collectibles, the Heritage of Americas’ Museum Roadshow was not only an appraisal event, but was also an opportunity for the museum to showcase historical items from around the world to its patrons.

With Trader Joe’s bags, baskets and plastic containers, people gathered July 23 to survey and appraise their treasures and collectibles, many of them passed down through generations. With such an eclectic array of collectibles, the Heritage of Americas’ Museum Roadshow was not only an appraisal event, but was also an opportunity for the museum to showcase historical items from around the world to its patrons.

Holding them as closely as the stories and the sentimentality that come with the items that they brought, roughly 40 folks filtered in and out of the Heritage of the Americas Museum located just inside the gates of Cuyamaca College with artifacts from the 19th and 20th century. All awaited a sort of ultimatum from Craig Helm, the museum’s guest and El Cajon resident, who appraised and valued each item.

“People really like [these events],” said Museum Director Kathleen Oatsvall. “Everybody has some stuff that they’ve found, whether it’s in grandma’s closet or a garage sale, and they’re always curious what it is and if it might be worth something really good. And sometimes we get some great surprises when people bring something in and it will be worth a lot.”

The Museum Roadshow, as the event is affectionately known, is on its fifth turn with Helm.

“The first time we did [this event], this guy brought in like $250,000 worth of planes, artifacts and he was saying his father used to treat the Indians as a doctor and they paid him in Indian stuff,” Helm said. “It was like I had died and gone to heaven.”

As the other attendees waited for their number to be called, they looked on with wonder and awe as family heirlooms or antique findings were valued from $50 to $15,000, ranging from baskets, Cheyenne baby cradleboards, Hopalong Cassidy radios, repurposed Ming Dynasty pots to U.S. Calvary saddlebags, Toltec figures, jewelry and blankets.

“The rabbit stick, if I had $1,500, I would give her that,” said Helm, a certified appraiser who has worked in the field for more than 50 years and favors prehistoric artifacts. “That’s the best one I’ve ever seen. God! That was a good one. First of all, they’re extremely rare. I look for artifacts all over San Diego County and Mexico and I’ve never even seen one like that. That was found in a cave [on private land]…the rabbit stick could have been like 200 to 300 years old…this was a prehistoric one made to use.”

One museum visitor, La Mesa resident Wayne Red-Horse, brought a Cheyenee baby cradleboard, a small Paiute beaded basket and a Hupa ceremonial point. The 1970s cradleboard, made by Hazel and Charlie Fast Horse, garned a high value. The rest of the artifacts were made circa 1900.

“I was a silversmith so I traded some silverwork for the cradleboard,” he said. “And it sounds like I got the best of the deal. I mean, we traded in the ‘70s.”

Red-Horse traded with his former business partner. The rest he received from his grandmother. His grandparents on his father’s side moved to Oklahoma during the Trail of Tears from the Carolinas. His grandmother was the only one to survive that. His father was Cherokee and his mother is Powhatan. He plans to pass the items down to his own children.

“I tell stories to them all the time,” Red-Horse said. “That’s how we pass our history on is telling stories.”

Helm helped the museum’s founder collect its artifacts. He runs an auction company with his fiancé, Diane, and will auction more items from his home at their next event August 6. He specializes in Native American and pre-Columbian artifacts, antique pictures, western memorabilia and Asian artifacts. More information on his August event can be found at helmauction.com.

“You pick up an artifact and no human being has touched this for 7,000 years,” Helm said. “It’s kind of a thrill for me.”

The attendees donated $5 for every set of three items, which went toward the museum’s programs for children.

The museum is open from 10 a.m. to 4 p.m. Tuesday through Friday and Saturday from 12 p.m. to 4 p.m. The cost is $3 for adults 18 and up and $2 for adults 55 and up. Children under 17 and students of the Cuyamaca-Grossmont College District with student IDs get in free.

More information can be found at www.cuyamaca.edu/campus-life/arts-culture/museum/default.aspx.