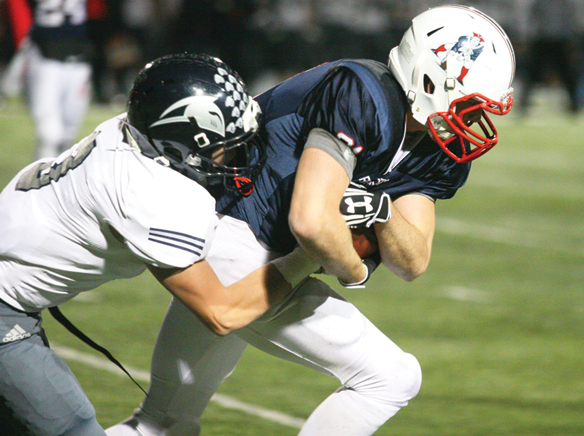 Christian is a small private school tucked away in the eastern foothills of El Cajon. The student enrollment is listed at 384, including about 200 foreign exchange students, which leaves about 150 boys at the school to play football.

San Marcos, meanwhile, is a public school in North County with a student enrollment of more than 2,200 students.

A David versus Goliath mismatch in terms of student enrollment sizes, the second-seeded Patriots (12-1) proved up to the challenge by defeating the fifth-seeded Knights, 19-7, on a damp, chilly night at San Diego Mesa College.

“We might be a small school but we proved we’re capable of accomplishing great things,” Christian senior receiver/defensive back Kai Arvan said. “We showed we could do things that people said couldn’t be done.”

The Patriots, regular season City Conference Central League champions, built a 19-0 first-half lead and made it stand up with a solid defensive effort despite being held off the scoreboard in the second half.

Arvan started the Pats on the way to earning their second CIF title in three years with an interception in the first quarter. Christian proceeded to drive the ball down field to record the game’s opening touchdown as senior quarterback Michael Carrillo completed a 16-yard scoring pass to Arvan in the corner of the end zone.

The Patriots quickly increased their lead to 13-0 when senior linebacker/tight end Sebastian Swift intercepted a pass thrown by San Marcos junior quarterback Will Freed and returned it 45 yards for a touchdown.

Senior standout running back/linebacker back Paris Miller made it 19-0 with a superb second effort, refusing to go down along the sideline en route to scoring on a 12-yard touchdown run with 4:17 to play before halftime.

Miller finished the game with 217 rushing yards to give him 1,194 for the season to go with 17 total touchdowns.

Carrillo continued a stellar season by completing 10 of 18 attempts for 83 yards with one touchdown — his 32nd this season to go with 2,523 passing yards.

Arvan, who had three touchdown catches in Christian’s 28-13 semifinal victory against the third-seeded Hilltop Lancers on Nov. 29, had four catches for 37 yards and the one touchdown in Saturday’s championship game.

Other targets for Carrillo in Saturday’s CIF final included Miller with two catches for 34 yards and junior receiver/defensive back Trevor Howell with three catches for 12 yards.

The Pats also successfully executed a fake punt to set up their last touchdown.

But it was clearly the Patriot defense that left its mark on this year’s Division III title game as the Knights (9-5) suffered seven turnovers in the game.

San Marcos did not score until 9:14 was left in the third quarter as senior Isiah Hennie burst into the end zone on a three-yard run from the wildcat position.

The Knights, who pulled off one of the section’s biggest shockers with a 3-0 quarterfinal win over top-seeded Santa Fe Christian and eliminated eight-seeded Granite Hills by a 28-17 score in the division semifinals, rolled up 340 offensive yards in the game but could only manage eight first downs.

Excellent tackling by Christian defenders proved to be the difference, limiting San Marcos to few big plays in the game.

Several players remain on the Christian roster from that championship team, among them senior lineman Owen Adair.

“Being a sophomore then, I was blessed with a great opportunity to be a part of that championship team,” Adair said. “In fact, that inspired me to work hard during the offseason to get better.”

Adair said positive thinking had much to do with the outcome of the 2013 thriller.

“We had the mentality that we could win even though they were a much bigger school,” he said. “We knew we could do it.”

While Christian did not receive a berth in this year’s state playoffs, the 2013 Patriots team proved it may rank among the best ever produced at the East County school.