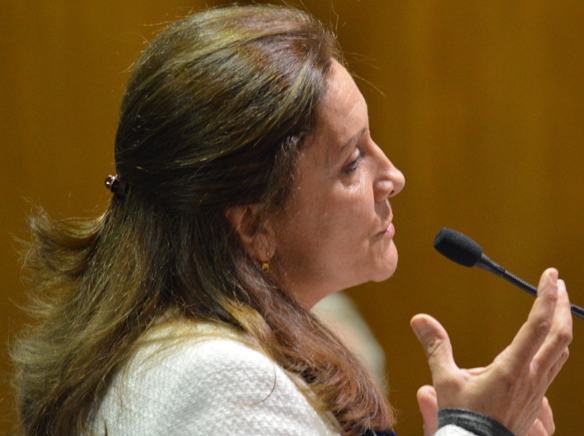 After two weeks of hearing applications from 23 applicants for the El Cajon City Council vacant seat left by Mayor Bill Wells, councilmembers voted 3-1 with Councilmember Tony Ambrose as the only opposing vote, to appoint Intsar Bales as its newest councilmember.

After two weeks of hearing applications from 23 applicants for the El Cajon City Council vacant seat left by Mayor Bill Wells, councilmembers voted 3-1 with Councilmember Tony Ambrose as the only opposing vote, to appoint Intsar Bales as its newest councilmember.

Both Councilmembers Bob McClellan and Gary Kendrick narrowed their selection to persons that had previously served on the City Planning Commission. McClellan said that though there were many applicants that were capable of filling the seat but that the issues of the city were far too important to branch out to far from someone that is not familiar with them.

Kendrick said he wanted to address the “big guerilla in the room” and that at this point in time that the council did not need another “one of us.”

“I think that a Chaldean immigrant that speaks Arabic brings to the council something that we do not have,” he said. “There are things that Intsar can tell us, insights she has, that we can’t, because we don’t have those experiences. I think it will mean a lot to the minorities in our community to have someone like Intsar.”

Mayor Bill Wells said he was proud of the city and the participants for going through the difficult Democratic process.

“I know now that we can make tough decisions through the years and have a well-behaved and positive supportive group at council and I thank you for that,” he said. “I hope all that applied, apply for different positions in the city and I hope that you will run for office.”

A member of the City Planning Commission, Bales is well versed on what most councilmembers said was a major concern, the Deemed Approved Ordinance (DAO) on alcohol sales in the city. Kendrick said that when the Neighborhood Market Association starting going to liquor stores collecting money for a lawsuit against the city that Bales went to many store owners, explained the ordinance to them, and many of them backed off and asked for their money back. He said this was one of the main reasons that Bales was his choice for the vacant seat.

Bales came from Iraq 30 years ago. She said then she would have never thought that she would be in this position.

“Where I come from, women are not important,” she said. “Especially for women, if you make it in America, you have made it to the top. I encourage women from other countries that they are very special person and you can make a difference, just as much as a man.”

Bales said that the DAO is a subject that touches her personally.

“Because it affects people that I love and the kids,” she said. “This is how I can pay back. By being vigilant on what helps and what destroys our community. Alcohol destroys a community. If you want to destroy a city, high crime will do it. Not everyone will support you, but they want leaders that speak loud, because they can’t. I know I can speak loud. What the Neighborhood Market Association is doing, what they are promoting is terrible and is going to destroy us if we allow it. So we cannot allow it. If we allow them to grow, they might be the next leaders that decides on our future and that worries me.”

Bales said it is not the color or education of the person that makes them, it is the kindness. She said she had lots of support from family and friends and she looks forward to working with the council.

“I believe I am the right person now because I understand the issues before the city,” she said. “The Deemed Approved Ordinance, new immigrants coming into the city and the need for them to have jobs.”

Be sure to pay the right people