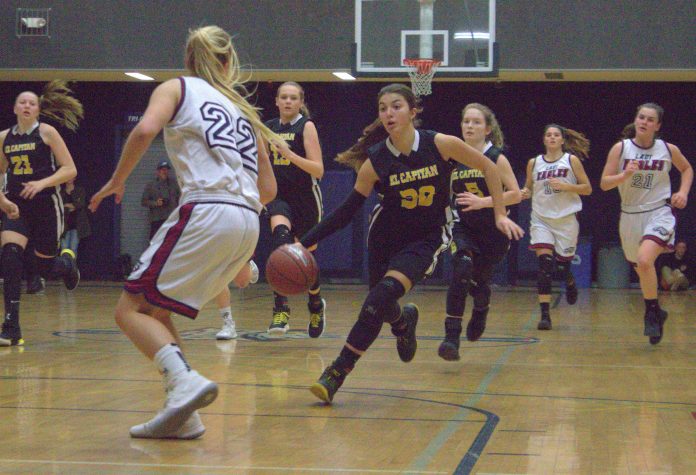 In January, the high hopes of El Capitan’s all-underclassmen varsity girls basketball team were only a glimmer on the horizon. The dream arrived sooner than expected.

Entirely staffed with freshmen and sophomores — and one lone junior who is a foreign exchange student — the Vaqueros tampered their expectations for the season. That was before they went undefeated in league, before they earned a place in semifinals.

In January, the high hopes of El Capitan’s all-underclassmen varsity girls basketball team were only a glimmer on the horizon. The dream arrived sooner than expected.

Entirely staffed with freshmen and sophomores — and one lone junior who is a foreign exchange student — the Vaqueros tampered their expectations for the season. That was before they went undefeated in league, before they earned a place in semifinals.

Assistant coach Dylan Curtis, whose father Darin Curtis is the team’s head coach, said he saw potential in the girls from the start, but did not expect to see the success they are seeing now for a few more years.

“We thought that if our girls could come together and do their jobs, we thought we could take [league],” he said. “I didn’t know we were going to be this good now. The long term goal has gotten closer. We’re creeping toward it faster than I thought we would be.”

Following a 52-24 win on the road in the quarterfinals over No. 3 Tri-City Christian, El Capitan (No. 6) will be returning to East County to play Christian (No. 2) in the semifinals.

Curtis said he is not concerned.

“They’ve played some good teams,” he said, “But so have we.”

The source of the young Vaquero’s success is not hard to pinpoint. This team has had its nose to the grindstone, said Walley Yeakle, assistant coach.

“These girls work hard all year,” he said. “They put in time in the off-season, they get better every day. We had a really tough schedule at the beginning of the season to get them ready for playoffs.”

In fact, league was a cake walk compared to their preseason, said sophomore Jordan Grandy, and the point of preseason was to prepare them for playoffs.

Preseason included games — mostly losses — against DI and DII teams. But sweat equity will pay off as the ladies of El Capitan fight their way through DIII playoffs.

Freshman Mackenzie Curtis said the team ran for a week before CIF to prepare themselves for the challenge.

“Right before we played Steele Canyon in our bye week, we ran every day as much as we could,” she said. “Practice was just as intense as it could be. We called it champions week and I told the girls earlier today before the game [against Tri-City] that this wasn’t running for punishment, this was running for the reward.”

The win against the Tri-City Eagles was something to behold, and not just in the lopsidedness of the scoreboard. El Capitan, despite a green roster, displayed strategy and technical skill on the court that completely overwhelmed their opponents. Perfection, they have not achieved, but they have three more years to try.

“When the girls do their jobs, we’re unstable,” said Yeakle, amid the uproarious celebration on the Eagles gym floor following the Vaqueros win.

Last year, with a completely different set of players, El Capitan undefeated in league as well, but they dropped in the second round. Devon Bullock, one of the few returners from the previous season, said she is excited to see the team advance farther this year.

“We’ve only gone up since last year,” she said.

The point guard said she hopes they are able to strike a balance between having a good time and getting good wins as the season draws to its final, climactic games.

“To have fun, that’s our main goal as a team,” she said, “to keep pushing and make it all worth it.” 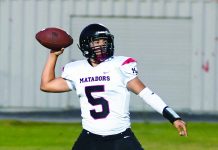 Search is on for San Diego County most inspirational high school...