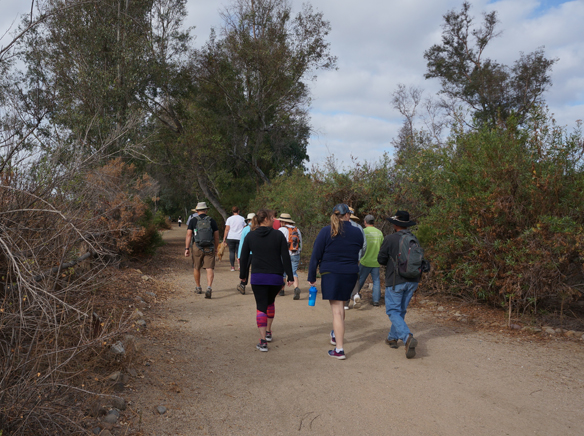 Robin Rierdan – the smart, enthusiastic, and energetic Executive Director of Lakeside’s River Park Conservancy – hosted one of her semi-regular hikes along the San Diego River this past September 22nd. She led a group of about a dozen Lakesiders along the High Trail, from Channel Road all the way to Magnolia Avenue in Santee. This leisurely and level walk on the well maintained trail included many stops and much fascinating information shared about one of our community’s natural jewels.

Robin Rierdan – the smart, enthusiastic, and energetic Executive Director of Lakeside’s River Park Conservancy – hosted one of her semi-regular hikes along the San Diego River this past September 22nd. She led a group of about a dozen Lakesiders along the High Trail, from Channel Road all the way to Magnolia Avenue in Santee. This leisurely and level walk on the well maintained trail included many stops and much fascinating information shared about one of our community’s natural jewels.

When you take this trail – and you should take this trail – one of the first things you will notice is the lush (for Southern California) vegetation lining it. According to Robin, when the trail opened in 2008, it was a bare, plantless path. Numerous volunteers and planting parties since have turned this once barren area into a lovely, shaded route with natural fragrances that accompany your sojourn. The stretch from Channel Road past the golf course is one of the most beautiful in Lakeside.

The first segment of this trail borders the old Hanson Aggregates sand mining pit and there is good news to share about that. Hanson has completed their mining operations here and is currently in the process of reclamation on the site. That means filling the hole they created, back to grade and eventually (and soon, hopefully) releasing the property to the River Park Conservancy, as promised about 20 years ago. Then the fun begins and much community input will be needed to turn the land into an “activity park” for the Conservancy. Robin is currently gathering a list of possible uses for the property and she encourages people to share their ideas with her. There will be a formal input meeting (or meetings) down the road, but it’s never too early to share your ideas – and right now the sky’s the limit.

One thing that won’t be included on the site is ball fields or similar organized sports activities.

Back to the trail, it’s in good shape and well cared for, serving as a relaxing getaway walk with your partner or your dogs, as well as a great jogging/biking/hiking path for those looking for more energetic diversions. Some chronic problems found here are littering – there are trash cans along the way and that’s where cigarette butts should go as well – and some vandalism to signage, which is perplexing. Who doesn’t want to learn a little about the area? Many have wondered why fishing is not allowed. Part of the answer is related to the non-native things that are left behind – trash.

Robin is hosting another hike on Oct. 13, at 9:00 a.m. This guided tour will take you off the beaten path and to the inner depths of the property, an area not normally open to the general public. They call it the “Cathedral” and it’s a place unlike any in Lakeside, filled with oaks, sycamores and willows. You have to RSVP for this hike, so call the LRPC at (619) 443-4770. They are offering a number of other events in the coming months, so check out their website at www.lakesideriverpark.org/attend-an-event!

Speaking of Hanson Aggregates, they hosted a limited open house of the Highway 67 and Vigilante Road site on September 30th. Part of a worldwide safety week, the RSVP-only event opened the plant to visitors from 10:00 a.m. to 1:00 p.m. Several dozen folks and families made the trek and were treated to a plant tour, an impressive display of huge tractors, and a quick hands-on lesson in how to make concrete. Lunch was also provided.

Hanson just reopened this plant last year, after having shut down operations here in 2009. The reason for the shutdown was the downturn in the economy. But with a healthy economy and lots of local building, the plant was reopened in 2016.

Most of what they make at this site is asphalt aggregate. It’s a fascinating process: the earth is carved from the onsite hills and moved, via very large trucks, to be dumped next to the conveyer plant. From there, the dirt is moved, sifted, crushed if need be, sifted some more, and eventually ends up in large piles of various sizes. Companies who need the sand bring their trucks up to buy and move the product. OK, so this is an oversimplification – it takes three shifts daily (and 24 onsite employees) to get the job done, in addition to plenty of machines and electronics to run those machines.

A fact not so well known is that recycled material (i.e., old concrete) is mixed in to all new concrete.

Hanson is considering another open house next year and perhaps annually.

Another longtime, family operated Lakeside business is about to close its doors for good. The owners of Lakeside Bait and Tackle on Woodside Avenue have announced plans to retire at this end of 2017, after 21 years of serving the fishing community of San Diego County.

The Lakeside Community Presbyterian Church is forming a Children’s Choir. Music Director Ron Hilley has signed on for the task. He has quite a resume, having performed on Broadway and with both the New York City and Metropolitan Operas. Hilley currently sings with the San Diego Opera. Kids from first through sixth grades are invited to rehearsals, held every Wednesday at 4:00 p.m. The practice lasts about an hour and light refreshments are served. For more information, call (619) 443-1021 or email at office@lakesidepc.org. The church is located at 9908 Channel Road.

East County teachers honored for their commitment to education