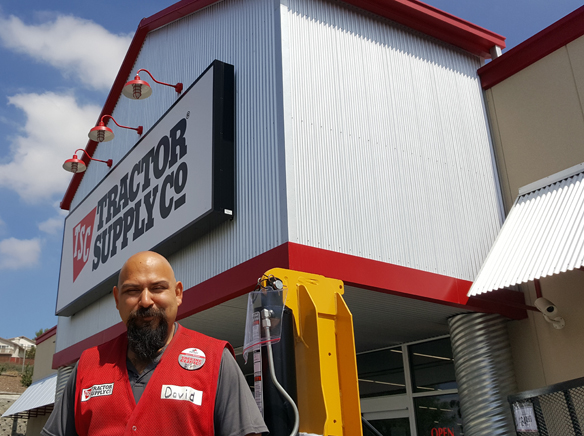 David Lizarraga believes in these words – they are his words to live by. And that’s a good thing, because he is part of the Lakeside community.

David Lizarraga believes in these words – they are his words to live by. And that’s a good thing, because he is part of the Lakeside community.

Lizarraga is the store manager of the Tractor Supply Company on Olde Highway 80. The business has been open for just over a year and Lazarraga has been there since day one. He had some pretty tall orders when he arrived, one being how to fit national chain store into this close, small-town environment without alienating the locals. There was much concern in the Lakeside community about how a large chain store would put smaller, older, family-owned feed stores out of business. Lizarraga found a way: by referring customers to those other stores when Tractor Supply can’t fulfill their needs.

“Though we’re a big chain store, we don’t carry everything,” he said, “so if a customer needs something we don’t have, I’ll refer them to another local store.” It’s a way of getting along and helping the customers beyond just selling stuff.

The Tractor Supply Company is the largest rural lifestyle retail store in the United States, with over 1,600 stores spread across 49 states. They have two stores in San Diego County (the other being in Ramona) and another up in Temecula. The rural atmosphere of East County brought them to the Lakeside area. The business employs about 15 people.

Lizarraga hails from Imperial County. He ran the El Centro Tractor Supply for several years before coming to San Diego County. He is steeped in family values and the importance of serving the community, both highly regarded ideals within his company’s mission. Lizarraga sees his store as a community center for the area, a place where people can spend a few minutes to meet and chit-chat with neighbors and old friends. He wants his store to be somewhere that people look forward to visiting – like an old water hole – not only for the products but for the atmosphere, where the community is part of his team and he part of theirs. He has made much progress toward that end.

When Lizarraga arrived in town, he was struck with how people were helping people here – small town values, some might call it. He was also impressed with how many groups were helping area kids. Lizarraga immediately joined in with the community, both personally and professionally. He now serves on the board of the Lakeside Chamber of Commerce and is involved with both the Lakeside Rodeo and the San Diego County 4-H club management.

With a longtime background in 4-H, Lizarraga has been helping locally with kids and families, even on an individual level. He mentioned a single mother who was struggling to help her child and his animal in the club. Lizarraga’s team went out to evaluate the animal, bringing food and other help for the family. Additionally, his wife Cecilia offers a “Chicken Chat” at the store, focusing on how to raise and care for backyard poultry. The store also recently finished up a Pet Appreciation Week and is looking forward to hosting a Farmers Market on Oct. 7.

While David Lizarraga has settled in as a new store manager and community member, he is just getting started – and our Lakeside community is benefitting from his contributions.