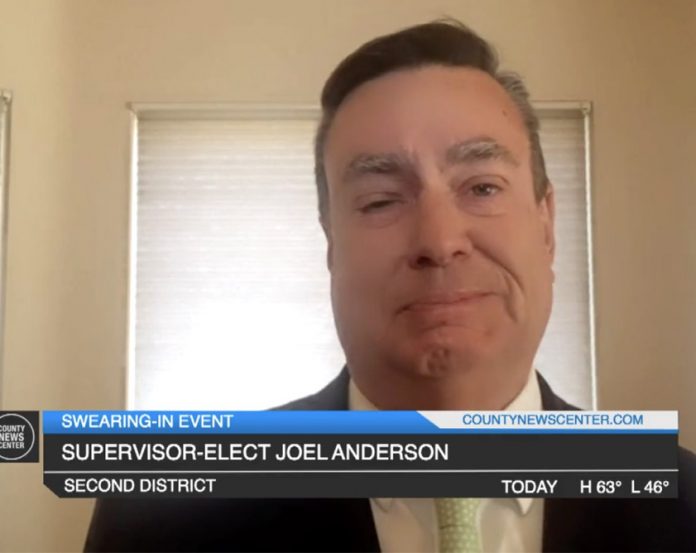 Wyland said that it was a “great pleasure” to administer the oath to Anderson, not only because he has been a friend of more than two decades but as colleagues together in the Senate, he saw someone who did an “outstanding job in representing his constituents but was also able to tackle seemingly insurmountable problems successfully.”

Anderson said he wanted to thank Dianne Jacob for her 28 years of service. “All those years she put our district first and worked hard for us,” he said.

Accompanied by his wife Kate, Anderson said he was thankful for her and his children as public service can “sometimes take a toll on one’s family” and that they have always supported him. He said he also wanted to thank the people of District 2.

“They have honored me with the privilege of serving them again and I am going to live up to every obligation that I made in all my campaign promises because they deserve it,” said Anderson. “They deserve someone fighting for them all the time. I know that we are facing tremendous challenges in the county. Whether it is COVID, homelessness or attainable housing, we are going to be laser focused on those issues delivering for our community.”

Anderson said he looks forward to working with his new colleagues and has had the opportunity to meet with each of them.

“They are wonderful people,” he said. “They are absolutely focused on solving problems. I know that even though these challenges are great, together we will climb that hill and we will solve these problems for all San Diegans. I’ve got work to do. You are counting on me showing up day one and I want to get going right now.”

Brand has her plans for La Mesa

From Mission Valley to La Mesa–Bouffant, a salon that shines