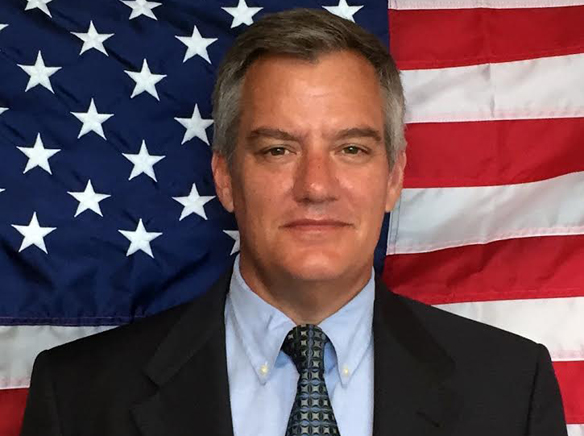 Army veteran and Nebraska Cornhusker fan Director, Veterans Administration San Diego Regional Benefits Office Patrick Prieb began his Veterans Benefits Administration (VBA) career in a small office in Lincoln, Nebraska, where he recalls knowing just about everyone. Working his way up the ladder, he joined the San Diego Regional Benefits Office as Director in July 2014, subsequent to the post having been vacant for some time. Immediately prior to coming to the San Diego office, he held a similar position in Seattle.

Army veteran and Nebraska Cornhusker fan Director, Veterans Administration San Diego Regional Benefits Office Patrick Prieb began his Veterans Benefits Administration (VBA) career in a small office in Lincoln, Nebraska, where he recalls knowing just about everyone. Working his way up the ladder, he joined the San Diego Regional Benefits Office as Director in July 2014, subsequent to the post having been vacant for some time. Immediately prior to coming to the San Diego office, he held a similar position in Seattle.

As the local top leader for the VBA, he oversees more than 600 employees who cover four counties: San Diego, Orange, Riverside, and Imperial. On this sunny, warm February morning in his office located on Rio San Diego Drive in Mission Valley, he was asked for his top three 2016 goals and what he envisions enacting or emphasizing to accomplish them.

His number one goal is improving the veteran’s experience. This he defined as when the veterans receive the benefits decision, “they feel they got a fair shot.” And this goal is based on how the Regional Office delivers disability benefit claims to the veterans in a timely, fair, balanced, equitable, and courteous manner. He added that, “the laws are intended to be enacted liberally,” so “we need to render these decisions in terms of benefit to the veteran” with “reasonable doubt in favor of the veteran.”

Offering that veterans want a “quick answer and fair decision,” he tracks a variety of relevant data. For example, he candidly shared that today there are about 14,300 pending disability claims, with roughly 3,000 (about 21 percent) over 125 days old. By comparison, the national average is around 22 percent. This puts the San Diego Regional Office above the goal set by VA Secretary McDonald that no more than 10 percent of the claims are more than 125 days old. Prieb said improvement has been steadily made since the “dark days” of 2013, while also noting that approval of three new Agent Orange conditions added about 250,000 during that time.

As for claim-based accuracy, the provided definition is, “An assessment of VBA disability determinations accuracy for Compensation claims that require a disability rating (or disability decision).” The Regional Office added that, “This is a measurement of the accuracy of the claim in its entirety; statistically – it gets harder to have higher accuracy as the number of claimed disabilities is increased per claim. The lower the number of claimed disabilities per claim, the higher the potential for a higher accuracy on the claim overall, so this measurement does not take into account the complexity or number of issues per claim.”

While pursuing his first goal, he said his second goal is to continue to strengthen community engagement. “We need to close the gap with some of the folks we might be missing.” “There might be veterans in financial distress who do not know to contact the VBA.” In pursuing this goal, Prieb recognizes the value of the various local veterans groups, such as the One VA Community Advocacy Board, which provided the basis for a relatively new VA initiative, MyVA Communities. According to Curtis L. Coy, Deputy Under Secretary for Economic Opportunity, Veterans Benefits Administration, “San Diego was the inspiration with a long-standing One VA Community Advocacy Board that has proven to be successful for over 20 years.” Prieb engages with these organizations on a personal level, such as his January visit to the United Veterans Council general meeting.

Because many veterans first turn to community groups for information, he feels pursuing alliances and partnerships may result in getting the veteran linked in with the VBA faster. These collaborative, more transparent relationships are seen as important in the overall program, which he said averages 70 community events and 426 hours of outreach per month, important in a region home to 220,000 vets, including an estimated 48,000 from Iraq and Afghanistan, the largest concentration of this generation of warriors in the nation. Following community outreach, his third goal is improving the appeals process.

Prieb notes some veterans will disagree with the benefit decisions they receive. These disagreements can result in formal appeals that can be processed by the Regional Office, Board for Veterans Appeals, and even the U. S. Court for Veterans Claims. Speaking of the veterans who file appeals, he emphasized, “We need to provide the judicial process expeditiously to them as well.” To that end, he has set new targets for 2016 and added 10 percent more resources locally for handling appeals.

Talking about applications and appeals, Prieb repeated the advice provided to the general session of the United Veterans Council (UVC). He encourages veterans to work with one of the many advocacy organizations, like Disabled American Veterans, Paralyzed Veterans of America, and others. At the least, they provide a second set of eyes for the vet. Also, many of these national groups are very knowledgeable of the laws and can offer salient advice to the vet, such as putting more weight on a specific piece of evidence while bringing it of the attention of the VBA.

Regarding claims processing, Prieb highlighted the movement to a paperless system. No longer is the staff passing around thick folders filled with papers. And the advent of the eBenefits system is a boon for the computer savvy veteran. For example, he/she no longer has to call someone at VA to ask for a copy of his/her benefits letter. It is now a simple process, once enrolled, of downloading the letter at his/her computer. Prieb attributes going paperless as one of the three main reasons they have been able to “chip away” at the claims backlog. The other two are 20 hours of mandatory employee overtime (no longer in effect) and Congressional approval for increased claim examiners. While noting the movement to a paperless system has increased the efficiency of the process, he stated the most valuable resource he has for improving the process are the people.

Eighty-five percent of the Regional Office employees are veterans, who he wants to keep motivated, because “a healthy balance in their personal lives provides for better productivity at work,” he said. “If they are engaged, they will deliver a quality product to the veteran.”

To this end, there is some flex scheduling, as well as telework made possible by the conversion to the paperless system. He also conducts quarterly town hall meetings with all the employees, without their supervisors. Putting into place a cultural change of “things feeding up from the bottom, rather than top down,” he spoke of how gaps are being identified and clarifications being provided. Additionally, employee suggestions are leading directly to improvements.

Mr. Prieb’s top three 2016 goals of improving the veteran’s experience, continuing to strengthen community engagement, and improving the appeals process need to benefit the region’s reported 220,000 veterans, including the 48,000 from Iraq and Afghanistan. Lots to be done and time will tell.